Tom Flanagan on child pornography, the backlash and the worst week of his life

What have you learned? Where do you go from here? Tom Flanagan takes questions from Anne Kingston 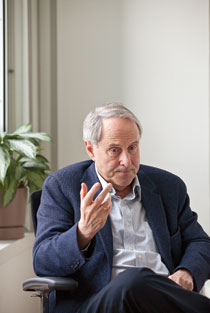 Tom Flanagan is a long-time Conservative political strategist and University of Calgary political science professor. Last week, he created an uproar with comments he made at the University of Lethbridge about child pornography. In their wake, he was fired from his positions as a Wildrose party strategist and a CBC panellist and the university announced his retirement. He spoke with Maclean’s in Toronto.

Q: If anyone understands how incendiary the subject of child pornography can be, you do. You managed Stephen Harper’s 2004 election campaign when it issued the press release,“Paul Martin supports child pornography?” Did warning bells ring when it came up in a forum about the Indian Act?

A: Not really. I was in academic mode. I’d been invited to speak on a university campus. Everything is up for debate; any question can be posed. It never occurred to me someone was taping it.

A: It’s the kind of thing you say in the classroom to frame an issue for discussion. When I talk about social assistance, I say, “Why do we have social assistance? Why don’t we let the poor starve in the street?” Take that out of context: “Flanagan says, ‘Let people starve in the street.’ ” It’s rhetorical. Pornographic images are pictures. You start from there and say: why are these images so particularly bad?

Q: What is your understanding of what these “pictures” are?

A: Well, there’s a range, from cartoons, movies, video. The nature of the pictures has changed but they are still fundamentally pictorial representation. The question is: what is so bad about these? And I think a number of things are very bad about them, but I never got a chance to provide the answer.

A: Oh, I think it does drive demand, in the same way the desire to smoke marijuana drives demand to produce it and sell it. So the question is: what can we as a society do, using governmental instruments to reduce demand? We’ve chosen to use the Criminal Code since 1993 but that still leaves a further question: what do we do by way of penalties under the Criminal Code? Most crimes are not punished by imprisonment in Canada; that’s reserved for the most severe or repeat offences. So is imprisonment the right punishment for someone who is a voyeur or passive consumer? Yes, he’s contributing to the evil by creating the market. But he’s not a molester. I think imprisonment is the right punishment for buying and selling, and certainly for child sexual abuse. But I think there’s a question if it’s proper punishment for possession and viewing, if those are the only offences.

A: Yes, but there’s a distinction between direct harm and indirect harm. Normally, the Criminal Code punishes direct harm. I was posing a question. And that was the wrong way to go about it in that forum. But in the classroom, I would pose the question the same way again. I’d say, “What’s the harm?” And the student would say, “You’re building a market for it.” And I’d say, “Yeah, that’s a harm,” and dialectically, we’d go somewhere together.

Q: You’re concerned about the personal liberty of the viewer. What about the children?

A: Well, in Canada, everyone starts with liberty unless it’s taken away. Freedom of expression is protected by the Charter [of Rights and Freedoms] except with restraints that are justified in a free and democratic society. I agree freedom to view child pornography should be restrained. We’ve made it a crime to do it; I’m not challenging that. I didn’t say child pornography should be decriminalized. I said: should we send people to prison? Is that the punishment for the person who is a voyeur and nothing more?

A: I didn’t claim there is a firm line. I am saying there are some people who are only voyeurs. And if they’re discovered, what do we do with them? And I think perhaps a combination of therapy and counselling will be more effective. We do know they’re not going to get that in prison. I’m not denying there’s a problem. I’m saying: what’s the best mode? I’m getting a lot of email from lawyers and social work professors who say, “You’re right on. This is a very severe penalty in the context of Canadian corrections.” Do we need such a severe penalty? Or do we need a therapeutic response? I don’t know. All I did was ask a question about a taboo subject. I don’t want to put people in jail. Some people have to be there for the protection of society. But in general, I don’t think we should. If that makes me a bad Conservative, so be it.

Q: You also volunteered you’d been put on the mailing list of the North American Man Boy Love Association (NAMBLA), an organization perceived as a front for sexual exploitation of children. How did that happen?

A: More than 20 years ago, when I was working for Preston Manning and the Reform party, I was given the job of hunting for racists who might have infiltrated the party. As part of my work, I subscribed to the Heritage Front newsletter to know what these people were doing. It went out of business and they must have sold their mailing list; I suddenly started to get neo-Nazi mailings and the periodical from [NAMBLA].

Q: What was your reaction?

A: I threw it out. I was horrified.

Q: Did you try to get off the list?

A: No, I didn’t think it would work; I didn’t want to be in contact with them. I threw it in the garbage until it stopped. I shouldn’t have brought it up. I’ve talked about it in class because it’s a funny story.

A: You start out looking for racists and you end up on the mailing list of a pedophile organization. It’s bizarre.

Q: The backlash to your remarks was immediate. The PMO called them “repugnant.” Alberta Premier Alison Redford said she was “absolutely disgusted” and “it’s a perfect example of people that take ideological arguments too far.” In such abstraction, is there a risk of losing humanity?

A: Of course you can take an argument too far. There are always competing considerations. All I was doing was raising a question. I don’t have any cause here—this is not my area of research. I never went out to speak on this.

Q: The CBC fired you as a commentator and the Wildrose party dumped you as a strategist. Did anyone give you the opportunity to respond?

A: No. It’s like Kafka’s novel, The Metamorphosis. A man wakes up one morning and he’s turned into a cockroach. When I left Lethbridge the next morning, I was a normal human being. By the time I got to Calgary by noon, I was a cockroach; I was a national pariah. Nobody had gotten in touch to ask me what had happened. I did get a call on my car phone from people in the Wildrose party saying they were severing their relationship.

Q: What was your reaction?

Q: The University of Calgary also announced your retirement in June. Is that voluntary?

A: They’ve corrected their statement, but somehow created the impression I’m being pushed out. On Jan. 3, I wrote to the president and expressed intention to retire in the summer. I’m 69 years old; I’ve been teaching 45 years. The university didn’t consult me about the statement. I’m going to be having a chat with the faculty association. The statement was injurious to my reputation. But I’m not harsh on the university. I’ve been controversial in the past and the university has been good to me. This statement was not.

Q: You’ve raised a subject that warrants discussion: how best to deal with people caught with child pornography. Do you think this will cause academic chill?

A: I’m already getting emails from professors saying, “I talk about subjects like this in the classroom; I’m going to have to be more defensive in the future.” I wasn’t teaching a class. This could also happen in the classroom; students could bring in a camera with a prepared question, get a professor to make a statement and put it on YouTube. Everyone teaching in Canada should think of the implications of this.

I think and hope this will turn into a major topic. People have to think about the sanctity of the classroom in the age of social media and what degree of support they’ll get from universities when universities come under pressure in the court of public opinion. It’s one thing to talk about academic freedom; it’s kind of self-serving. In order to teach well, you have to be able to challenge students—to put things in a provocative way. You can’t have someone looking over your shoulder, making sure you use the right words. Students are going to be the losers.

Q: But what is your responsibility? You said it was entrapment. Do you think your answer provided the fuel?

A: It did in that situation. I take responsibility for handling it in a way that was not appropriate. I don’t apologize for raising the question.

Q: To what extent does the schadenfreude stem from your other political views?

A: There’s some of that. I get emails saying, “Die motherf–king asshole.” But I’m getting just as many from people who say, “I’m not a Conservative and never thought I’d be writing you, of all people—you’re an asshole and you always have been and always will be—but on this issue, you’re not being well treated.” And I think it’s great it’s making people think across the spectrum.

Q: What have you learned?

A: I’ve learned people you thought were your friends maybe aren’t.

Q: Where do you go from here?

A: I’m going ahead with my retirement but I’m not going to disappear. I won’t be in any political party. I was getting tired of the low level of thought and the talking points and negative ads. It’s stultifying. I’m not going to miss that. I don’t fit in politics. I’m politically incorrect wherever I go. Universities are the best asylums for someone like me. Maybe I’ll go back and concentrate on pure research. Maybe it will lead to another controversial book.

A: I’ve thought there is a book here about correctional policies and the notion of moral panics.

Q: Do you see irony in the backlash to your statement being in the same week of the Supreme Court’s controversial ruling on hate speech?

Q: Do you feel alone?

A: Very much, except for my friends. I was accused, judged and condemned in 2½ hours. You’re an individual and political leaders call for you to be fired, which is another angle worth exploring: the power of political leaders turned against private citizens.

Q: But you’re a political architect. You understand how this power matrix operates. This couldn’t have come as a total shock.

A: I’ve seen it before. Maybe I brought it on myself. On one of my last appearances on CBC, I said I was the Trotsky of the conservative revolution and I lived in fear of the ice pick to my head. Maybe this is the ice pick.