Iraq: When does the 'constructive dialogue' start?

You misled Parliament! We support the troops! 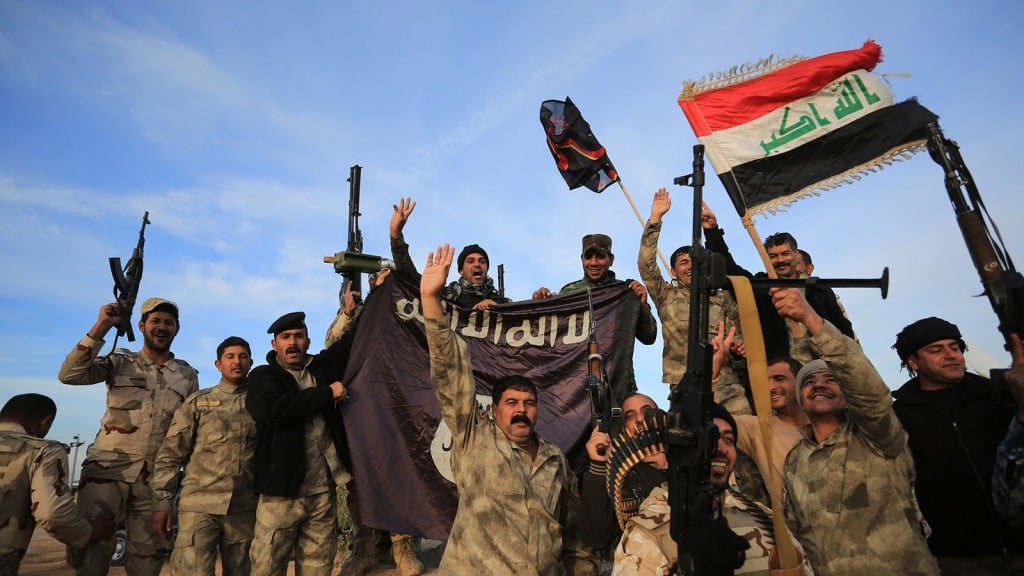 Stephen Harper would not let the New Democrats and Liberals confuse him or the public as to what was really going on here.

“Mr. Speaker, the only problem here is that the NDP does not support the military mission against the Islamic State,” he explained, “something that all of our principal allies and many more around the world are involved in because it involves a direct threat to this country and to the civilized world.”

“Our troops are there advising and assisting Iraqi forces, and they are doing an excellent job,” the Prime Minister continued. “We stand 100 per cent behind them.”

The Conservatives stood to applaud their agreement with the sentiment.

But Tom Mulcair, ever the quibbler, believed this to be an imperfect summation of the situation and so he stood to differ.

“Mr. Speaker, our troops always do an excellent job in the missions that they are given by the Canadian government and by this Parliament,” he said, receiving even some applause from the Conservative side. “The question here is this: Why did the Prime Minister mislead the Canadian public?”

This was a different kind of problem.

“Those quotes are clear. Those questions were precise,” he said, sort of bragging. “The Prime Minister gave intentionally misleading answers. Canadians want to know why their Prime Minister, on something this important, did not tell the truth to Canadians.”

There were protests from the government benches, “misleading” being something one is not to be heard accusing another of doing in this place. Duly, the Speaker stood and asked Mr. Mulcair to keep in mind that such language is unparliamentary.

Challenged so directly, the Prime Minister then attempted to win the moment with another definitive declaration.

The Prime Minister chopped his hand at the official Opposition and once again the Conservatives stood and cheered.

Had the resolution presented to the House of Commons last fall only asked MPs to agree or disagree with the notion of killing the bad guys, we might not be hearing these noises of consternation now. But that 294-word motion specified asked the House to “note that the Government of Canada will not deploy troops in ground combat operations.”

And a week before that was put to the House, there was what the Prime Minister said of the Canadian Forces members that were by then already on the ground in Iraq.

“They are there to advise and assist Iraqi forces in the northern part of the country,” he said. “It is to advise and to assist. It is not to accompany.”

Tom Mulcair then asked the Prime Minister whether the Canadian Forces would be assisting in the targeting of ISIS troops and whether that would constitute a combat role. The Prime Minister didn’t directly answer either of those questions.

Canadian involvement has subsequently “evolved” and soldiers have been marking targets for airstrikes and getting near enough to the bad guys to be shot at and shoot back.

To this, Mr. Harper and his government now loudly proclaim that Canadian soldiers will return fire if fired upon. Fair enough, but it doesn’t seem anyone is suggesting otherwise. Indeed, for the sake of dispensing with superfluous rallying cries, the House might additionally just agree to follow the prayer each day with unanimous agreement for the statement that “We are appreciative of our fellow citizens who agree to endanger themselves in the national interest.” Then perhaps the House would be better able to focus on the details.

Though perhaps even that is imagining too much.

“Mr. Speaker, all Canadians support the right of our forces to defend themselves when they are sent into harm’s way,” Liberal Leader Justin Trudeau posited in the House on Monday. “The government said our ground forces would advise and assist, but not accompany, Iraqi troops. Now we find out they are routinely on the front lines. Why did the government mislead Canadians?”

“Mr. Speaker, I am not sure we could train troops without accompanying them,” the Defence minister sighed in response.

Rob Nicholson perhaps thought he was being funny. And if you have a sense of humour about clumsy contradictions in the explanation of war and/or poorly played retorts, this is surely worth a laugh or two.

But if the Prime Minister stands in the House in September and says the mission on the ground “is to advise and to assist … not to accompany,” it is not particularly wise for the Defence minister to stand in the House in January and say Canadians could not train Iraqis without accompanying them. In attempting to make Trudeau seem unserious, Nicholson had diminished his own seriousness.

The Defence minister was subsequently made to try to run around two specific questions asked by Liberal MP Marc Garneau at committee hearings this morning: Whose description of the mission for soldiers on the ground was correct? And what do the terms advise, assist and accountability mean? Nicholson rambled in various directions.

We should indeed define our terms. “Accompany,” for instance, would seem to have a very specific connotation when used in reference to military operations. “Combat,” as well. (We could also try to arrive at an understanding of what everyone thinks of when they hear Mulcair use the phrase “combat zone.”)

Turning to Gen. Tom Lawson, the chief of Defence staff, Garneau then read aloud from the Department of National Defence’s guide to terminology, which apparently defines a “combat operation” as a “military operation where the use or threatened use of force, including lethal force, is essential to impose will on an armed opponent or to accomplish a mission.”

“Is this not what we’re doing in Iraq?” Garneau asked.

“It is not,” Gen. Lawson said. “We are able, under the advise and assist role, to provide the peshmerga the ability to heighten the accuracy of the weapons they’re calling in in their combat role, not our combat role, but their combat role. What we would require to be in combat would be this accompany term, and you are right to mention that the word accompany in everyday language is quite clear, it means to be with. But in military terms, as you’re quoting doctrine, it has a very clear other meaning and that is that you are now up front with the troops that you have been assigned to, with your weapon being used to compel the enemy.”

Or, as Brig.-Gen. Michael Rouleau put it in a briefing earlier this month,  “A combat mission is when we leave our positions and move physically toward the enemy to capture or kill him. We are not doing that here … The fact that we had an exchange of fire with ISIL does not mean that this has become a combat mission. It is a great deal more nuanced than that.”

So the Canadian Forces can be in the company of Iraqis without accompanying them and they can contend with enemy bullets without being in combat. On those grounds, the Prime Minister cannot be said to have misled the House, something NDP MP Jack Harris has formally asked the Speaker to find.

So this much we now know. Pity then that we can’t know how much those particularly defined actions are expected to cost, the government simply refusing to entertain the question.

In appearing alongside Nicholson and Lawson this morning, Foreign Affairs Minister John Baird had said that there were “legitimate questions” about this country’s engagement. “We will try to answer those as clearly as we are able, but as we have a constructive dialogue, let’s not lose sight of the nature of the threat. After all, the issue is bigger than that, this House is bigger than that and, in my view, Canada is bigger than that.”

Baird said something similar in launching the official debate of the mission in October, but in this case he said as much less than 24 hours after the Prime Minister stood in the House and ventured that, “I know the opposition members think it is a terrible thing that we are actually standing up to jihadists. I know they think it is a terrible thing that some of these jihadists got killed when they fired on the Canadian military.”

Even if we grant that each of the three parties has some mind for politics in this case and allow that question period is most conveniently a place for shouted declarations (You misled us! We support the troops!), we might agree that it does not embiggen the soul of this place to hear anyone suggesting anything like sympathy for the enemy (and, in that sense, let us imagine Mr. Harper was merely suggesting some sort of political complication for the opposition).

Though the precise utility of having Parliament vote to authorize a military operation is contested, it is unquestionably a good and serious thing that such efforts are brought before the House for close scrutiny and debate. And that that debate will, like any other, involve shouting is not to be lamented. But in the current case, and from its start, the moments of constructive dialogue have come only as little gasps between extended bouts of shouting.

Today’s committee hearings would follow that pattern, NDP MP Paul Dewar getting shouty with Nicholson and the Conservative members finding time to be disappointed in the Liberal and New Democrat representatives. And after a week of shouting around the terms to be used, there would seem to be good questions that are going unasked.

Hopefully, Parliament will do better with the next war.