The NDP's Brian Masse has held his riding in Windsor, Ont., for 17 years. Now the Liberals have a star candidate in Sandra Pupatello. The race between these two popular politicians is a key contest. 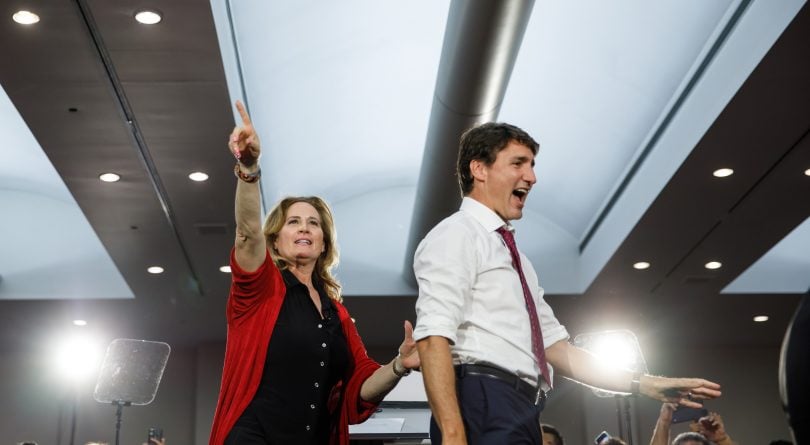 The Prime Minster attends a rally with Sandra Pupatello in Windsor on Sept. 16, 2019. (Adam Scotti/LPC)

Seconds after New Democrat Brian Masse left his car for a canvass in Windsor West on the last day of summer, a scorcher typical of this town, a local health-care worker was hollering across the street. When Masse nodded that he’s the local NDP candidate, his constituent mimed an election sign. “A big one,” she requested. Just steps away from Windsor’s massive Chrysler plant, Masse, a former employee, was in friendly territory.

When he wrapped up his three-hour tour of the neighbourhood of Fontainebleau, Masse had secured a heap of new lawn signs. He got into the nitty-gritty of auto policy with anyone who asked, and he talked hockey—he’s a lifelong goalie—whenever he got the chance. One door-knock produced a new supporter in a young father. “You’re a hockey guy,” said the prospective voter. “You’ve got my vote.”

Masse has won eight elections in a row in Windsor, Ont.—two for city council and the rest for the federal seat—and he’s hoping to stave off a high-profile challenge from a former provincial Liberal heavyweight. His success is twinned with the NDP’s quest for relevance in 2019. Masse is the dean of the NDP caucus, and his long track record of standing up for autoworkers—still a voting juggernaut in the trade-reliant border town—has kept him in office. If he loses Windsor West, a riding in his leader Jagmeet Singh’s hometown, the defeat would likely signal disaster for the NDP. That helps explain why Singh visited the area on Sept. 20, just over a week into the campaign.

RELATED: Jagmeet Singh’s moment to shine—and get a little angry

It’s no secret in the riding that Masse scores high on personal appeal. A Mainstreet poll for iPolitics before the campaign started indicated he personally outpolled his party, scoring the votes of 31.8 per cent of respondents. When pollsters asked about which party respondents supported, the NDP fell to third behind the Tories, at 17.8 per cent. In late-September, 338Canada polling analysis projected the riding as a toss-up.

The Liberals smell blood. They’ve nominated Sandra Pupatello, a former Liberal cabinet minister at Queen’s Park who served the same voters for 16 years. After a failed bid to lead Ontario’s Liberals in 2013, Pupatello served as chair of HydroOne and spent two years as the CEO of the WindsorEssex Economic Development Corporation. She also did some work for PriceWaterhouseCoopers. Now, after speculation she’d run federally in 2015, Pupatello is hoping to make her political comeback as a star player in Justin Trudeau’s re-election—and perhaps the final piece of the puzzle in the Liberals’ attempt at back-to-back majority wins. In that Mainstreet poll, she personally outpolled Masse by a hair, at 33.8 per cent.

Trudeau visited the riding in the campaign’s first week, firing up the party faithful at the St. Clair College Centre for the Arts right across the river from Detroit’s aging skyline, anchored by the ominous General Motors headquarters known as the Renaissance Center. Predictably, the centrepiece of Trudeau’s stump speech was his government’s salvaging of NAFTA. Trudeau hailed the efforts of his foreign minister Chrystia Freeland, who was in town for the second time in as many weeks. (Two days before the election call, Freeland met local union leaders and committed $213,000 for apprentice training, accompanied by Pupatello for much of the day.)

Pupatello, the evening’s opening act, told the friendly crowd that a vote for Masse was a waste of time. Autoworkers, she said, ought to have someone at the cabinet table. Windsor, after all, is still an auto town where Chrysler employs more than 6,000 workers. Ford adds another 1,800. Auto-parts manufacturers that feed the supply chain employ thousands more.

RELATED: Slumping loonie could add $3.5B to cost of Windsor-Detroit bridge

Unifor, the largest union representing autoworkers, is spending every legal cent at its disposal fighting Conservatives. Unifor national president Jerry Dias told Maclean’s in August the union would support anyone who could topple a Tory—including Masse. But in Windsor, where Tories often—with some recent exceptions*—run a distant third, the calculus for voters is more complex.

The same day Trudeau and Freeland were in Windsor, Unifor Local 200 leaders posed with Masse as the area’s NDP candidates launched their national auto strategy. But the union vote isn’t a slam dunk for any one party. Pupatello, who takes some of the credit for Ontario’s stake in the billion-dollar auto bailout in the midst of the financial crisis, claims friends among the workers on the line. She used to campaign outside the factories on her own. “Now we have [union] insiders who want to do the gates with us,” she says in between homes during a morning canvass. “The rank and file have always stood up for me.” Pupatello proudly points out that Buzz Hargrove, the longtime head of the autoworkers union, nominated her as a provincial candidate in 2007.

That broad appeal is the core of Pupatello’s pitch. She’s a pro-business Liberal with access. She can get a CEO and union leader in the same room. And she can deliver big projects specifically for Windsor, a claim she says perennially elected New Democrats can’t make. It’s a message she repeats at the door relentlessly. Pupatello is gunning for her old constituents to send her to Ottawa. If Masse hopes to hold his corner of Canada for the NDP, the goalie in him will likely need to play the game of his life.

EDITOR’S NOTE, Oct. 2, 2019: This story has been updated to reflect the fact that Conservative candidates finished second in Windsor West in 2011 and 2008.