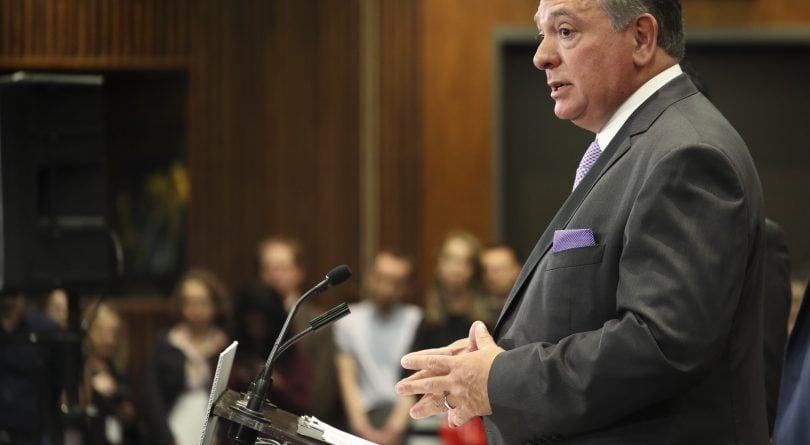 TORONTO, ON - SEPTEMBER 8: A press conference was held to announce the province's plans for the distribution and usage of marijuana as it become legalized next year. The announcements were made at MacDonald block by Attorney General Yasir Naqvi, Minister of Finance Charles Sousa and Minister Health and Long-Term Care Eric Hoskins. (Richard Lautens/Toronto Star via Getty Images)

Anyone who thought Ontario’s election campaign would be a polite, nuanced affair can officially give up all hope. The Liberal budget paints a picture of a bold premier in Kathleen Wynne, spending wisely and quietly influencing federal corridors of power. Set against that incumbent, there’s Doug Ford—who dismisses almost every penny Wynne spends.

“Kathleen Wynne is writing lots of cheques with your money,” Ford told reporters before Finance Minister Charles Sousa delivered his budget speech in the legislature.” She’s making big promises with your hard-earned tax dollars. I’ve looked at the finances, and I can tell you one thing. Her cheques will bounce.”

Ford complained of “massive tax hikes” on businesses and the middle class. Progressive Conservative MPP Vic Fedeli said Ontarians shouldn’t believe a word in the budget. “This is an election document,” he said. “It’s not a document that anyone should take seriously.”

But every time the PCs moan about the drunken Liberal sailors at Queen’s Park who never found a taxpayer dollar they couldn’t spend, Wynne’s team will position the premier as the mature person in the room—and hope voters see it her way.

The budget plan is riddled with examples of perceived Ontarian leadership on the national—and continental—stage. Sousa positioned his province as a Canadian leader in the fight for a modernized NAFTA, touting Wynne’s meetings with three-quarters of U.S. governors. The budget plan pledges to “vigorously defend the interests of Ontario’s industries and workers” as renegotiations continue. Indeed, Wynne has met more governors than any other premier, merrily tweeting photos along the way.

The budget reminds retirees and those soon to join them that Wynne’s government claims credit for a national expansion of the Canada Pension Plan. “The CPP enhancement was the culmination of years of effort by Ontario working with the federal government and other provinces and territories to address the retirement savings needs of today’s workers,” it reads.

As the Liberals look to flank the NDP on healthcare investment, the budget stakes the government’s claim—to the chagrin of New Democrats—to have launched a national debate on a pharmacare program that would make drugs cheaper for everyone. (NDP leader Andrea Horwath told reporters she disagreed with the Liberal pharmacare plan, calling it and other new social spending a “meagre attempt to get votes.”) As Ottawa announces a new advisory council on the implementation of national pharmacare, the Liberals say the feds are simply following the leader. “Ontario is pleased,” the budget reads, “that the federal government recognizes the importance of this issue.”

Queen’s Park Liberals can collaborate, too. The budget recalls Ontario’s work with British Columbia and Saskatchewan to prod the pan-Canadian Pharmaceutical Alliance and the Canadian Generic Pharmaceutical Association into lowering drug costs. Starting this April, the budget reports, “the prices for almost 70 of the most commonly prescribed drugs in Canada will be discounted up to 90 per cent off the equivalent cost of their brand-name equivalents.”

Wynne and co. may be collaborators, but they want Ontarians to trust them to stand up to the federal government, too. Take the equalization program, for example. “Equalization is an important part of the Canadian federation, embedded in the Constitution,” reads the budget. But there’s a big caveat: “A responsible and critical assessment of the equalization program should be taken to ensure that the impacts of any changes are thoroughly understood and fair to the people of Ontario.

“The province will continue to press the federal government for fair treatment under the program.”

If Ford’s PCs attack the Liberal plan to accommodate the federal legalization of marijuana, those Liberals will counter with their “safe and sensible framework … that protects youth and reduces harm.”

The budget tirelessly attempts to burnish the Liberals’ credentials as mature managers of the public purse—even as they pile up red ink. The Liberals will “responsibly manage the province’s finances and take on challenges that may arise from uncertainty in the economy.” Ontario’s fiscal standing “positions the province well to make important investments while projecting deficits.” The government’s plan to get eventually slay the deficit is “deliberate and focused,” and premised on “responsible management of program spending.” Ultimately, Wynne’s team promises to “continue to balance fiscal responsibility while making strategic investments to build a strong foundation.”

The budget’s overwhelming message to voters is they can only trust one party to guide them through that tumtultous world and rebalance the books six years down the road. For his part, Ford disagreed—and in typically blunt terms.

“Just imagine what Kathleen Wynne will do if she’s reelected,” he said. “God help us.”