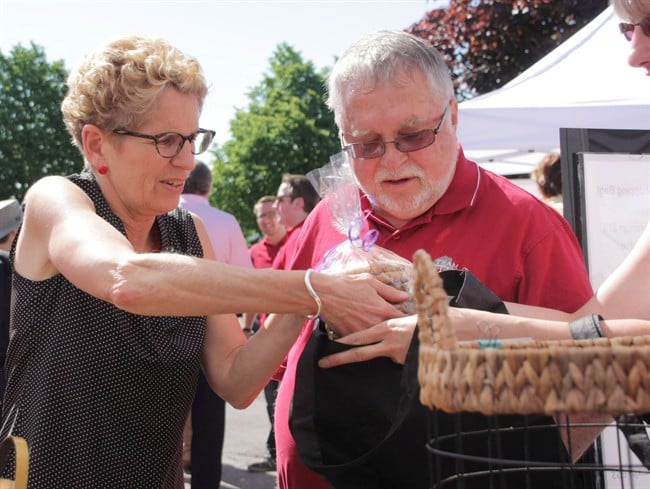 Liberal Leader Kathleen Wynne is seen at a farmer’s market in Waterdown, Ont., on Saturday, June 7, 2014 with local Liberal member Ted McMeekin as she campaigns for the June 12 election. (Colin Perkel/CP)

TORONTO – Ontario’s minister of municipal affairs and housing is resigning his cabinet post, a move he says he is making to help the premier achieve gender parity.

Ted McMeekin wrote in a Facebook post Monday that he will continue to serve as minister until Premier Kathleen Wynne names a replacement.

Speculation about a pending cabinet shuffle is rampant at the Ontario legislature, and Wynne has said that in a “hypothetical” one, she would like to have an equal number of men and women in her cabinet.

She said in a statement Monday that, “As we take steps towards gender parity in cabinet, selfless and bold action like Ted’s is welcome.”

There are currently twice as many men as women in the Ontario Liberal cabinet.

The Hamilton-area member of provincial parliament wrote that he is a feminist who, thinking of his three daughters and his wife, has often “dreamed of a day” when the question of gender parity wouldn’t even arise.

“Sometimes the best way for a man to advance the equality of women may be to step back and make room at the table,” wrote McMeekin. “Ultimately, I support the premier’s leadership in this matter and I want to do what I can to help her achieve it.”

McMeekin wrote that when a new cabinet is named, he’ll return to serving his constituents of Ancaster-Dundas-Flamborough-Westdale, but his post does not say whether he’ll run again in 2018.

He was first elected to the legislature in 2000. He has also served as minister of government and consumer services, minister of agriculture, food and rural affairs, and minister of community and social services.

Prior to his move to provincial politics, McMeekin was a Hamilton city councillor and mayor of the town of Flamborough.

In his statement McMeekin included among his achievements bringing in a poverty reduction strategy with the goal of ending chronic homelessness in 10 years, a new affordable housing strategy with a portable housing benefit and introducing a local food act.

“Ted is a strong progressive voice, advocating for such important issues as social housing and poverty reduction,” she wrote. “I am very pleased that Ted will continue to be a valued and valuable member of our caucus.”