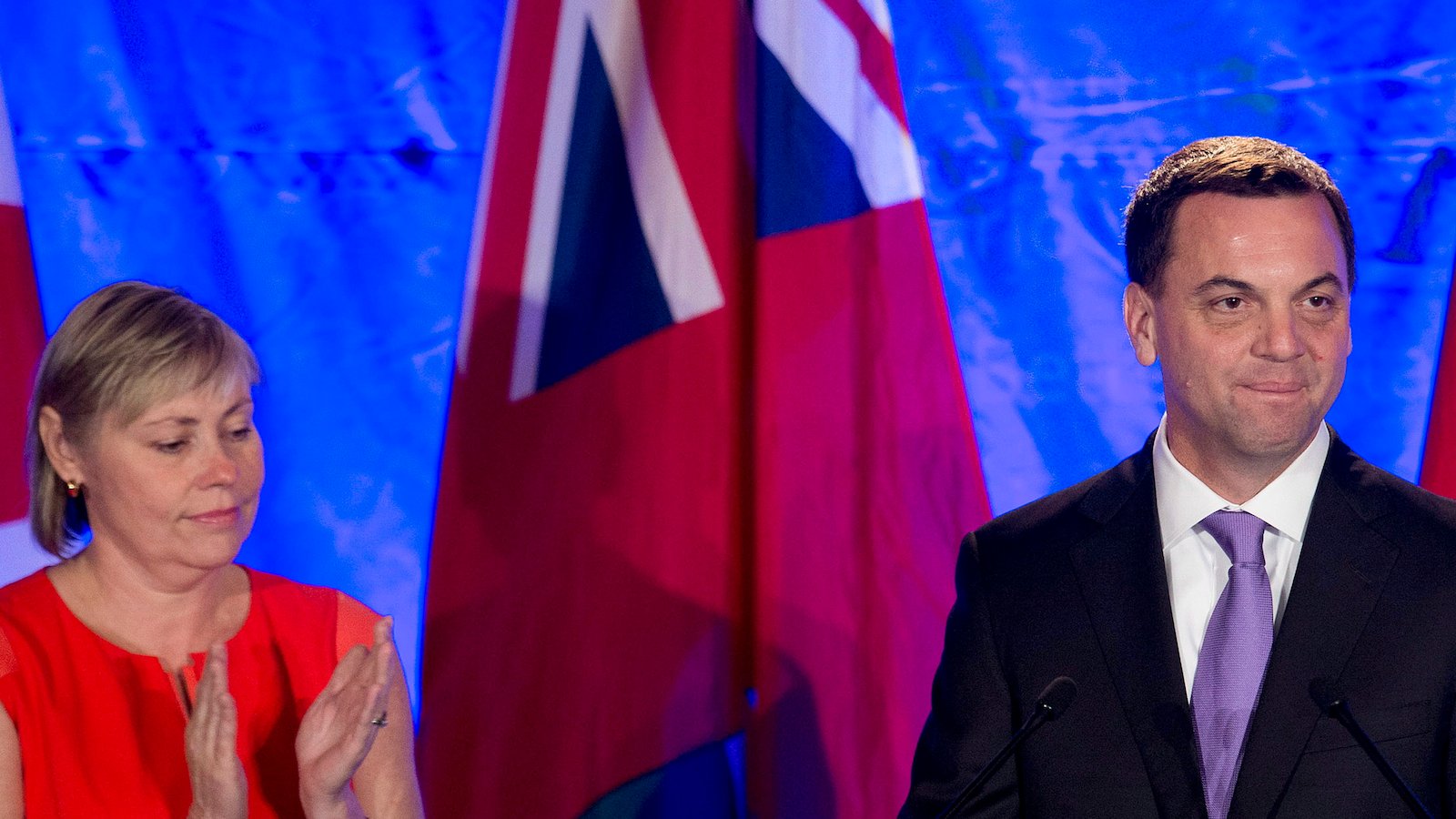 Ontario Progressive Conservative leader Tim Hudak, right, announces next to his wife Deb Hutton that he will be stepping down as party leader after being defeated his election night campaign head quarters in Grimsby, Ont., on June 12, 2014. (Nathan Denette/CP)

GRIMSBY, Ont. – In his first election campaign as leader of Progressive Conservatives in 2011, Tim Hudak failed to connect with Ontario voters — critics panned his performance as wooden and artificial.

In his second, he was far more confident and far more comfortable — but no more successful.

Hudak ended his ill-fated five-year run as Conservative leader Thursday as he conceded defeat at the hands of Kathleen Wynne’s scandal-plagued Liberals — an election many observers believed was his to lose.

“Nobody should mistake this result as an endorsement of the status quo,” Hudak told a muted crowd of Conservative supporters in Grimsby, Ont.

“Ontario families rightly expect to see a level of transparency and a standard of conduct that is dramatically different from the Liberal record of these past years.”

Over the course of the campaign, Hudak made only passing reference to the $1.1-billion Liberal gas plant scandal that drove Dalton McGuinty out of office, although Tory insiders say that wasn’t a deliberate strategy.

Rather, Hudak wanted to deliver as positive a message as possible — an effort to look more like a premier than an opposition leader.

He left it to New Democrat Leader Andrea Horwath to lead the attack on what she repeatedly called a “corrupt government,” while he touted his plan to offer voters hope of a better tomorrow, with more jobs and a stronger economy.

“There has been an overwhelming negativity and far too much anger, particularly from the Liberals, but also the NDP and that’s not going to bring a single job back,” he said.

“I believe my message of hope will trump their campaign of fear and negativity.”

The Conservative goal was to keep Hudak as positive as possible, given his promise to cut 100,000 public sector jobs, and stake out ground early in the campaign by promising to create one million jobs over eight years, which quickly had the other parties to reacting to his ideas.

“There was a deliberate attempt at the beginning of the campaign to grab headlines and set the agenda, and I think we did that,” said PC campaign spokesman Will Stewart.

“This entire campaign has been about our million jobs plan.”

Hudak made a bold promise to resign if, once elected, he failed to eliminate Ontario’s $12.5-billion deficit in two years, a year faster than the two other parties.

But he shrugged off the many economists who lined up to point out the basic mathematical error in the Conservative promise to create one million jobs over eight years: they were confusing person-years with jobs, essentially counting the same job eight different times.

“There is no argument that tax cuts create jobs,” Hudak countered. “They just debate the numbers.”

Hudak has been criticized for not having much real world experience outside government — he was first elected at age 27 in the 1995 Conservative sweep led by Mike Harris — but he did hold jobs as a customs officer while going to university and later as a regional manager for Walmart.

He was promoted to cabinet after being re-elected in 1999, becoming minister of northern development and mines.

Hudak married Deb Hutton, Harris’ chief adviser and one of the true power brokers during back-to-back Conservative majorities in 1995 and 1999. They have two daughters, Miller, 6, and Maitland, born just a month before the election campaign began.

Hudak’s grip on the PC leadership was shaken after the Tories blew a big lead in public opinion polls heading into the 2011 election, which allowed the Liberals to win a third consecutive term as government, one seat short of a majority.

He was caught in the crossfire by McGuinty’s attempts to engineer that one additional seat the Liberals needed when the then-premier offered veteran Conservative Elizabeth Witmer a plum job as head of the Workplace Safety and Insurance Board.

Not only did McGuinty fail to get his majority, the Conservatives lost a seat they’d held for 20 years to the New Democrats.

Hudak survived an automatic leadership review following the 2011 election loss, but his grasp on the party weakened even further as some members pushed for another review last September.

That would have required a change to the PC constitution, which was not approved by delegates at a convention in London.

Hudak laughed off the 2013 challenge as a “minor sideshow,” but party members openly questioned why his approval ratings were not improving, and some — including veteran cabinet minister Frank Klees — were upset by his attempts to quash the dissenters’ motion hit the convention floor.

It was exactly the kind of open challenge he didn’t need with an election just months away, but he predicted — incorrectly, it turns out — that it wouldn’t matter to voters.