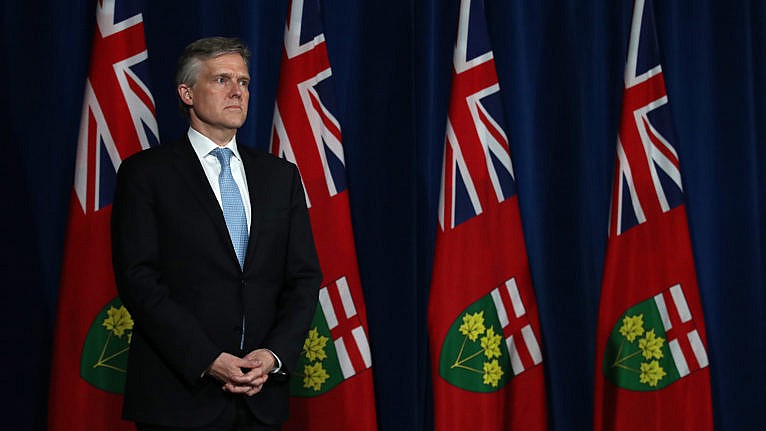 Ontario revealed legislation on Thursday that would allow for fines of up to $1 million for nursing home operators, and homes that fail to meet standards could be forced to hand over control to a government-appointed supervisor, the Globe reports.

The proposed legislation includes pledges to spend billions of dollars on hiring more workers for the chronically understaff sector, doubling the number of inspectors to keep closer watch on conditions in the homes, and building new facilities to replenish the province’s aging stock of homes with multi-bed wards.

“The Fixing Long-Term Care Act is a comprehensive rewrite of the rules and the law that will ensure that we protect our seniors and improve the quality of care and quality of life,” Long-Term Care Minister Rod Phillips said in an interview.

The coronavirus pandemic has laid bare weaknesses in the province’s oversight of the sector, including the decision of Premier Doug Ford’s government to all but eliminate proactive inspections of homes in 2018. COVID-19 has torn through homes in Ontario, killing 3,824 residents. The virus was particularly lethal in older homes where many of the residents slept in the same room and shared a bathroom with two or three other people.

The government is also hiring more inspectors, but has not acted on calls to shift toward not-for-profit operations, which, research shows, are often better.

The minister is also facing mounting pressure for recently announcing that the government has awarded 140 of 220 new construction projects to private, for-profit companies, which own 60 per cent of the province’s homes.

In surgery: John Horgan is having surgery this morning for a growth in his throat, Global reports. He has appointed Mike Farnworth as the deputy premier. The premier used the occasion to encourage people to be proactive and see a doctor if they have health concerns.

Horgan was feeling well enough on Thursday to chair a virtual premiers’ meeting.

“I’m not happy with the fact there has been a bit of a bypass of our region,” Axworthy said. Manitoba Premier Kelvin Goertzen agreed: “It’s disappointing. Western Canada needs to be better represented at the cabinet table.”

Pressure on Guilbeault: In the Globe, both Konrad Yakabuski and Adam Radwanski have columns pondering that impact of the new environment minister on climate and resource extraction.

Climate hope: As Trudeau heads to Europe for a G20 summit and COP 26 meeting, a new report says the Liberal climate plan could meet Canada’s greenhouse gas emissions targets before the end of this decade, CP reports.

Canada’s emissions have risen more than three per cent since 2016, the most of any G7 nation, five of which saw emissions decline in that period. [Catherine] Abreu said that fact and the purchase of the Trans Mountain pipeline in 2018 did not go unnoticed. But Trudeau has substantially upped the ante in his climate plan over the last 12 months, including promising to end the sale of gas-powered cars and create an emissions-free power grid, both by 2035, as well as capping emissions from oil and gas and then forcing them downward, no later than 2025. The Clean Prosperity analysis says those three things alone could get Canada almost halfway to the new target the Trudeau Liberals set last spring, to cut emissions 40 to 45 per cent below 2005 levels by 2030. The previous target was 30 per cent below 2005 levels.

Impatient Grits: Liberal MPs don’t know why it is taking so long for Trudeau to call a caucus meeting, they tell CBC, on the record. echoing off-the-record remarks recently reported in the Hill Times.

“There’s no explanation or excuse for not having already had a national caucus meeting,” he said. “I expect we will have one shortly.”

Ambler sues PCs: Former CPC MP Stella Ambler is suing the Ontario Tories, alleging it was “unlawful” for Doug Ford to appoint another nomination candidate over her in Simcoe-Grey, the Star reports.

Ambler’s plans were thwarted last June when Ford hand-picked Collingwood Mayor Brian Saunderson to be the Progressive Conservative candidate in the midst of a four-candidate contest for the nomination in that riding. In a 29-page statement of claim filed with the Ontario Superior Court, which will hear the case Friday, Ambler’s lawyer contends the former MP was not treated fairly.

Elevate, a Toronto-based not-for-profit, has received $5.8 million from the federal government to help job seekers from under-represented communities. When previously asked by CTV News, the organization would not say how much, if anything, it paid Margaret Trudeau to participate in the symposium, but denied there was a relationship between the event and the government funding.

Long probe: The Competition Bureau is still investigating grocery giants that allegedly fixed the price of bread in Canada for at least 14 years, the Financial Post reports. The Competition Bureau executed search warrants on some of the most powerful food companies in 2017. The bureau says these things take time.

“It looks like Canada has dropped the ball,” said Ambarish Chandra, a professor at the University of Toronto who focuses on competition and public policy. “No one’s paid a fine. No one’s gone to jail. It’s crazy.”

As Brian Bethune wrote in 2018 in Maclean’s, “do not cheat with what Scripture calls the staff of life.”