O'Toole and Trudeau sharpen their tone as election day nears

Politics Insider for Sept. 14, 2021: The gloves come off; taking on hospital protesters; and more Quebec drama 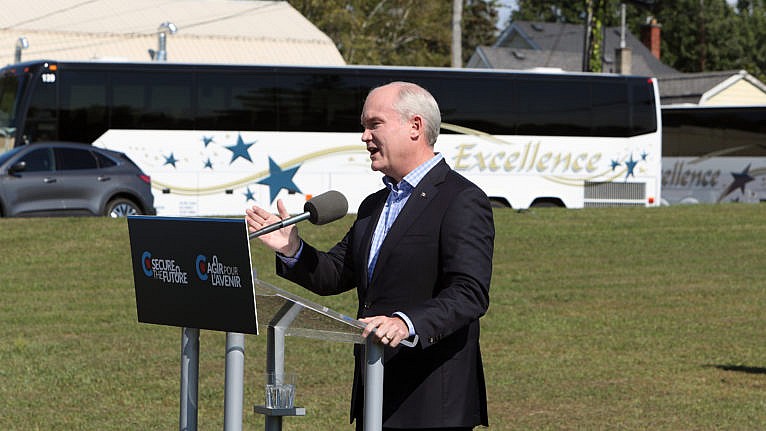 It’s a week to E-day, and Erin O’Toole and Justin Trudeau don’t have nice things to say about one another, CBC’s Catherine Tunney reports.

In Carp, outside Ottawa on Monday, O’Toole levelled his harshest personal attack on Trudeau, contrasting Trudeau’s blackface-wearing party phase with his own record of military service: “Every Canadian has met a Justin Trudeau in their lives—privileged, entitled and always looking out for number one. He was looking out for number one when he called this expensive and unnecessary election in the middle of a pandemic. That’s not leadership, that’s self interest. And it’s Justin Trudeau through and through.”

A few hours later, in Vancouver, Trudeau responded with an attack on O’Toole: “I’m not impugning his character. I’m not saying he doesn’t love his kids. I’m saying he’s wrong about how to ensure jobs and prosperity and a protected country for people in the future. But that’s what Canadians get to choose. I’m going to let him and his proxies and the anti-vaxxer movement and the gun lobby and the anti-choice crowd … continue to attack me, fine. I’m going to stay focused on Canadians.”

Hospital protests: Trudeau was in Vancouver to promise to make it a criminal offence to obstruct access to hospitals, which may actually already be illegal. There were protests outside hospitals across Canada on Monday, CBC reports, which politicians of all stripes, except those in the People’s Party, were quick to condemn. The Canadian Press has a good roundup, including the story of Faye Doiron, who is in Toronto from P.E.I. for a double lung transplant and had a police escort to get her through the lines of unmasked, unvaccinated protesters, which she said was “terrifying,” since she has been told COVID-19 would likely kill her.

When a protester taunted Trudeau about his wife, he responded: “Isn’t there a hospital you should be going to bother right now?” Global reports.

Splinter party: Writing for Bloomberg, Stephen Wicary points out that the PPC’s unusually high polling numbers appear to be coming at the expense of the Conservatives.

Bloc bounce: In Quebec, the fallout from the English debate continues to boost Yves-François Blanchet. Aggregator Tooclosetocall.ca says the Bloc surge may deny the Liberals a majority.

Former senator and La Presse editor-in-chief André Pratte has a piece in the Gazette explaining why Quebecers were angered by a question posed to Yves-François Blanchet. In short, the question, about two Quebec laws (bills 96 and 21), was ill-informed and ill-advised, he argues. In Le Journal de Montreal, nationalist columnist Richard Martineau denounces (translation) what he calls “systemic anti-Quebec racism” in English Canada.

On the other hand: Constitutional and civil rights lawyer Julius Grey tells the Gazette that the laws really are bad.

“Everyone has been trying to please Mr. Legault, but the truth is that those two laws are very, very questionable. We have to have courage and we have to speak even if speaking carries certain risks. I’m tired of the non-debate that you can’t discuss these things without a chorus of the indignant attacking you. There is no attack on Quebec. On the contrary, those two laws are bad, and it has to be said without any anti-Quebec sentiment. I feel very strongly that I am a Quebecer, but I feel that those two laws are terrible.”

Dawson survivors: If the Conservatives are also under pressure from the Bloc wave in Quebec, they will not benefit from a gaffe Erin O’Toole made in a CBC interview in which he wrongly said that the gun used at the Dawson College shooting was illegal. Dawson survivors on Monday called for voters to shun the Conservatives, the Gazette reports.