However, minister's office says dual nationals from affected countries travelling on Canadian passports would not be subject to restrictions 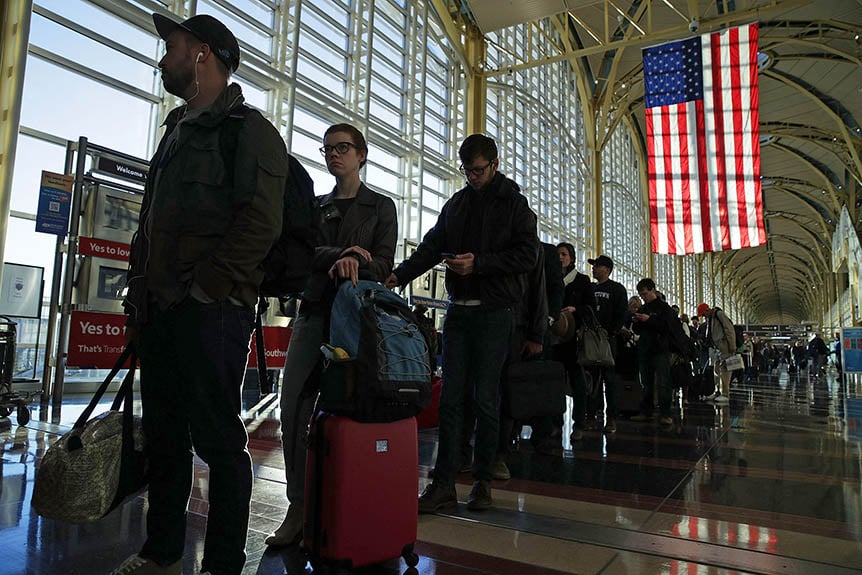 But a spokesman for Immigration Minister Ahmed Hussen said dual nationals from the affected countries travelling on their Canadian passports would not be subject to the restrictions.

Spokesman Bernie Derible also said Canadian permanent residents from the six designated countries who have valid resident cards and valid U.S. visas, and are deemed eligible by U.S. border authorities to enter the U.S., would not be denied entry.

“We are awaiting additional details from U.S. officials,” Derible said in an emailed statement.

“The Department of Homeland Security has indicated that it is discussing the executive order and the court’s decision with the departments of State and Justice and will provide additional information on implementation at a later date.”

The government is advising all people planning travel to the U.S. to verify admission requirements ahead of time, he added.

“Like all countries, U.S. authorities have the final decision as to who enters their territory.”

The U.S. high court handed Trump a political victory after two lower appeal courts overturned his earlier attempts at imposing a ban. The ban is expected to take 72 hours to take effect.

The Supreme Court, on its final day before a summer recess, said the ban can be enforced on travellers from Iran, Libya, Somalia, Sudan, Syria and Yemen if they lack a “credible claim of a bona fide relationship with a person or entity in the United States.”

The U.S. high court said it would hear full arguments in the October on the ban, one of the most heated and divisive issues of Trump’s young presidency.

The federal New Democrats, meanwhile, criticized Prime Minister Justin Trudeau for refusing to personally speak out against the ban.

The Liberal Trudeau government has largely adopted a cautious, wait-and-see approach when it comes to the policy pronouncements and Twitter outbursts of the famously unpredictable U.S. president.

RELATED: Trump travel ban: ‘I am stuck in the United States’

With the exception of expressing disappointment over the U.S. decision to withdraw from the Paris Agreement on climate change, the Liberals have avoided directly criticizing Trump’s policies, striving instead to find common ground on stimulating economic growth in both countries.

“We expect our leaders to be brave enough to stand up for human rights and against policies that put lives at risk, while perpetuating hate and fear,” NDP immigration critic Jenny Kwan said in a statement.

Trump’s original travel ban, announced just one week after his January inauguration, took effect immediately and caused chaos at airports across North America when it was imposed on citizens of the six countries, plus Iraq.

At the time, the Liberals held off on making any initial comments on the ban, as ministers worked the phones with their U.S. counterparts to find out how it would affect dual national Canadian citizens from the affected countries.

Trudeau did tweet a photo of himself greeting a young Syrian refugee, along with a message that read: “To those fleeing persecution, terror (and) war, Canadians will welcome you, regardless of your faith.”