Politics Insider for Feb. 7: The city of Ottawa moves against the occupying protestor; Pierre Poilievre makes a big announcement; the Conservatives stare down a pivotal choice 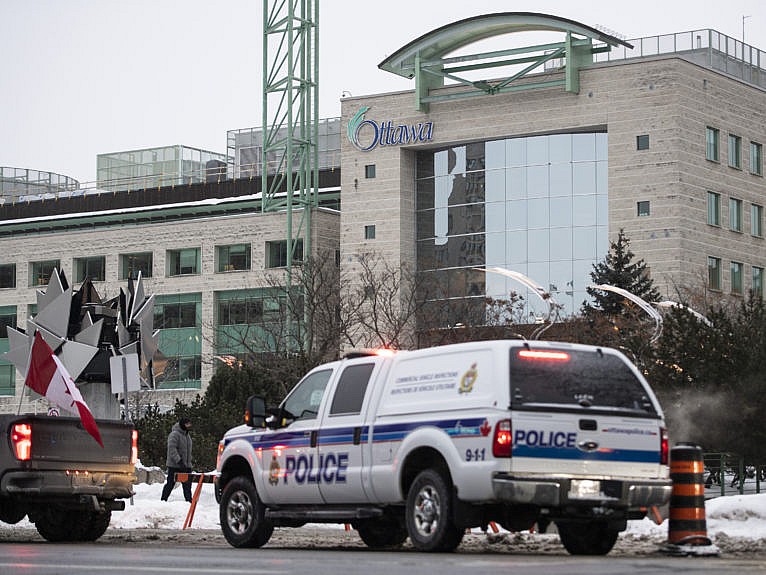 Crackdown: After a difficult weekend for Ottawa, Mayor Jim Watson declared a state of emergency on Sunday, calling the occupation of the capital “the most serious emergency our city has ever faced,” CBC reports.

A local state of emergency will allow Ottawa to work more efficiently to manage essential services and make procurement more flexible, the city said. Provincial legislation grants mayors powers during an emergency to make orders “not contrary to law to implement the emergency plan of the municipality and to protect property and the health, safety and welfare of the inhabitants of the emergency area.”

Police move: Later, police moved on a logistics camp, seizing fuel and making arrests. CBC’s Judy Trinh got video of the episode. Protesters appeared surprised and angered by the move, a departure from the hands-off approach that Ottawa police had pursued so far. Several people were arrested on mischief charges, and CTV reported that police were planning to cut off fuel supplies.

Deputy Chief Steve Bell told CTV News at Six this is the next step in the enforcement to deal with the ongoing protest downtown. “Look at how we limit things moving in and out of the protest area,” said Bell. “We’ve really focused and targeted on removing the access of gasoline to the area and we’ve had several seizures and several arrests related to that.”

Surge: Enforcement seemed to take a long time. On Friday, Police Chief Peter Sloly pleaded for more resources at a meeting of the Ottawa Police Services board, CBC reported, with councillors expressing frustration at the lack of enforcement. On Saturday, there were bouncy castles, saunas, a wooden food shack in Confederation Park and a feeling of lawlessness in the city, as horns honked and fireworks were set off next to apartment buildings.

Getting somewhere: In a column in the Citizen, Kelly Egan captured the frustration, but also a growing feeling that the authorities were beginning to take steps.

Sunday afternoon brought word that police would be cracking down on the supply of fuel and other materials to the vehicles in the core. And Mayor Jim Watson’s declaration of a state of emergency will only open more doors to extraordinary measures. So, maybe we’re getting somewhere. It can only help, too, that Sloly announced during the Saturday meeting that 257 RCMP officers were being made available to OPS. (In terms of numbers, especially early in the week when the protest-crowd slumps, there will surely be enough manpower to handle whatever needs to be done.) One has to think this week will be a turning point. Everyone is tired, or outright exhausted, there is no movement on “ending mandates,” not even a hint at political negotiations, a growing need for everyone to get home. (Do these people not have lives?)

Fear: Steps cannot come too soon for downtown residents, who learned Sunday from Twitter that someone had taped shut the doors of an apartment building and set a fire in the lobby.

Loathing: Republicans are angry that GoFundMe, under pressure from Ottawa, shut down a U.S.-based fundraiser for the convoy, Reuters reports.

Hearing today: A hearing seeking an injunction to silence Ottawa’s horn honkers, which was adjourned Saturday, will resume this afternoon.

Enter Poilievre: On Saturday, while Ottawa was in chaos, Pierre Poilievre released a video announcing he will seek the Conservative leadership, although what he actually said, incorrectly, is that he is “running for prime minister.” CP has a story.

In a three minute video released on social media Saturday evening, Poilievre, seated at a desk in front of a bookshelf, doesn’t mention the Conservative party by name or the contest, saying only that he wants the job as prime minister. Despite his reputation as a fiery performer in Parliament, he calmly delivers his message that he believes government spending is out of control and wants to make “Canadians the freest people on earth.” As examples, he lists paying lower taxes, raising a family according to one’s own values and “freedom to make your own health and vaccine choices.”

Poilievre is seen as a favourite, and he quickly collected endorsements from a number of Conservative MPs and former minister John Baird, who went on Global to promise that Poilievre can “galvanize Canadians.”  As yet, nobody else has announced a candidacy, although redder Tories Peter MacKay, Jean Charest and Patrick Brown are all being discussed as potential challengers.

Convoy Attitudes about the convoy divide Conservatives as the leadership kicks off. Some, like Poilievre and  Lethbridge MP Rachel Thomas, support it. Although there are indications that the mood may be shifting. Calgary MP put out a post supporting the convoy and complaining about media coverage of it, and then a later post with a different tone.

Stay away: In the Post, Tasha Kheiriddin writes that the party should avoid supporting the lawless protesters.

Middle-class families in suburban ridings across the country aren’t likely to drive around with obscenities gracing their cars. New Canadians, BIPOC Canadians and LGBTQ Canadians aren’t going to join a party that smells of intolerance. And Canadians in general take a dim view of the Trump-style politics that are entrenched south of the border.

If there is a sweet spot for the party to land in, it is at centre-right, where Red Tories but also scores of Blue Liberals are quietly uncomfortable with the economic direction or lack thereof of the Trudeau government. Those voters crave a competent, fiscally conservative alternative that is more interested in policy heavy-lifting than in glib, misleading social media hits.

RIP John Honderich: The Star has a heart-felt editorial outlining the decades-long commitment to journalism of former publisher John Honderich, who died on Saturday at the age of 75.