Ottawa police move in on the protestors

Politics Insider for Feb. 18: The protests collapse; the House of Commons erupts; tensions rise even further in Ukraine 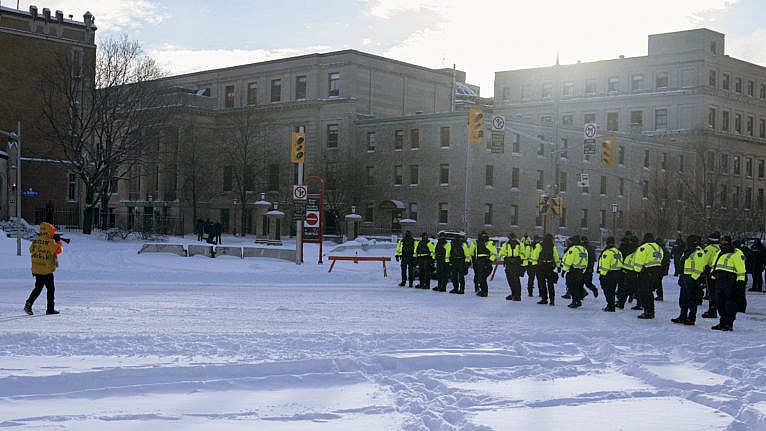 Police face off with a protester against COVID-19 mandates, Feb. 18, 2022 in Ottawa. (Robert Bumsted/Associated Press)

And the crackdown begins: Following Justin Trudeau’s invocation of the Emergencies Act, the forces of the government have begun to rain on the truckers occupying Ottawa. Following a Wednesday warning from Ottawa Police, arrests and an increased police presence intensified significantly in the capital’s downtown core. Metal fencing was erected in front of Parliament Hill to protect against potential violence, reports the Globe:

Still, demonstrators dug in, partying in front of Parliament, and truckers laid on their horns.

An Ontario government official called the measures a “cordon and clear” strategy that has been developed by the integrated command centre involving RCMP, Ontario Provincial Police and Ottawa Police.

Under arrest: Several defiant protestors were arrested, including Chris Barber, who is one of the more prominent organizers of the protest. Barber has previously said that the protest will continue until their demands are met. He has also said the protestors have “empathy” for the people of Ottawa. Barber is expected to face criminal charges.

Freeze!: Threats that protestors and their donors would have their bank accounts frozen came true today. Chrystia Freeland said certain individuals associated with the protest have already had their accounts frozen by financial service providers, although she declined to provide any further details.

The big picture: The Globe’s Tanya Talaga has an insightful, big-picture look at how what’s happened in Ottawa could be harnessed in the fight to defund the police:

What we have seen play out in Ottawa, in Coutts, Alta., and in Windsor, Ont., is about much more than protesters building hot tubs or holding weekend dance parties. What we are seeing, on a wide scale, is the inequality of so-called law and order.

Battle in the House: Behind the fences, a different battle was being waged. A heated debate over the Emergencies Act took place in the House of Commons today, with the Conservatives and the Liberals making headlines for their antics. Trudeau called the invocation a “last resort,” according to the Globe:

“We understand that everyone is tired of this pandemic. We understand that Canadians are frustrated with COVID. Some protesters came to Ottawa to express their frustration and fatigue with public health measures. That’s their right,” Mr. Trudeau said. “It’s a right that we’ll defend in this free and democratic country. But illegal blockades and occupations are not peaceful protests. They have to stop.”

Not budging: Trudeau still needs to rally votes to formally substantiate his declaration of a state of emergency, although the powers granted by the Emergencies Act will be in effect regardless. Interim Conservative leader Candice Bergen rebuked Trudeau in the House, saying her party will vote against the motion, once again aligning her party with the protestors:

“At every turn, the Prime Minister has stigmatized, wedged, divided and traumatized Canadians,” she said. “And now without even a single meeting with a trucker, without talking through one of their concerns, without apologizing for his insults and listening to what people have to say, without using any other tool at his disposal, he has used this overreach this Emergencies Act and it’s wrong.”

Legal troubles: The Canadian Civil Liberties Association agrees with Bergen, and is willing to go to court over it. The association announced Thursday it will sue the federal government over its invocation of the act, reports the CBC:

“Emergency powers cannot and must not be normalized,” said CCLA executive director Noa Mendelsohn. She said use of the act “seriously infringes on the Charter rights of Canadians.”

Musk memes again: Also against Trudeau is Elon Musk, who posted a meme comparing Trudeau to Hitler on Twitter.

Bad news: The New York Times took some flak from Canadian journalists for its coverage of the protests on its flagship podcast The Daily, accusing it of misrepresenting the situation by lazily buying into folksy Canadian stereotypes. Others noted the eerie similarities between the Times’ mistakes with its Canadian coverage and Western media’s flattening of complex issues in other countries.

Ontario opens: As chaos consumed the capital, its province of Ontario lifted many of its COVID restrictions on Thursday. Restaurants, cinemas, and gyms lifted all capacity limits. Mask rules still apply.

Buy or rent: In grim (if unsurprising) news, the Parliamentary Budget Office published an alarming report saying houses are highly unaffordable. Among a number of stark figures, the report concludes that the price of an average house in Canada has nearly doubled since 2015.

Standoff: Shots were fired in Ukraine on Thursday, amplifying fears that Russia will imminently invade the Eastern European country. Shelling occurred during a skirmish between Ukrainian forces and pro-Russian separatists, who periodically violate a cease-fire and have done so yet again, according to Reuters. Russia has accused the West of hysteria, but U.S. President Joe Biden told reporters he’s predicting an invasion:

“We have reason to believe they are engaged in a false flag operation to have an excuse to go in,” Biden told reporters at the White House. “Every indication we have is they’re prepared to go into Ukraine and attack Ukraine.”

The Politics Insider will return after a short break, on Wednesday, Feb.  23.