Politics Insider for Jan. 31: Protesting truckers settle in for the long haul; public opinion on the convoy waivers; Ottawa contradicts itself on Ukraine 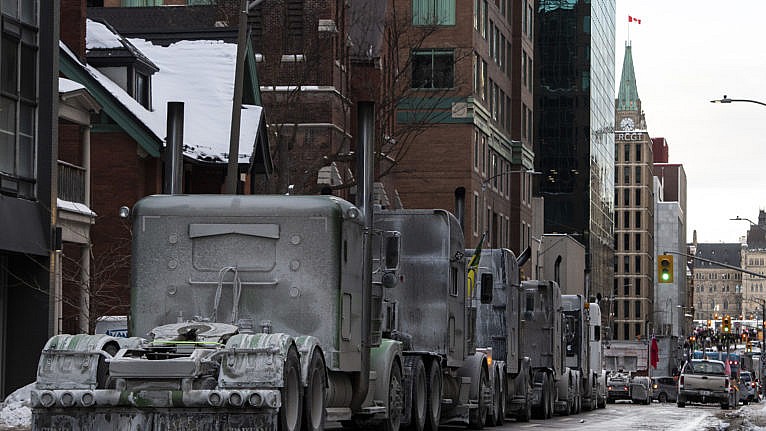 Not leaving: After a weekend in which they thoroughly disrupted life in downtown Ottawa, organizers of the “Freedom Convoy” plan to stay put, the Citizen reports.

Unfree in Ottawa: That is not at all what people in Ottawa want, Mayor Jim Watson said Sunday, CBC reports.

“Quite frankly, [residents] feel they’re prisoners in their own home. And so my hope is that at some point, the police reach the conclusion that it’s time to have a serious discussion about moving these people on. They can’t keep blocking routes that are emergency routes, that are bus routes, that allow people to get in and out of the downtown core,” he told CBC chief political correspondent Rosemary Barton on Rosemary Barton Live on Sunday.

Investigations: Ottawa police have a lot of work to do. They are trying to manage the massive, traffic-disrupting protest and also investigating “the desecration” of the National War Memorial, the Terry Fox statue and threatening, illegal and intimidating behaviour towards police and other city workers, Global reports.

Desecrations: The desecration of the war memorial and the Terry Fox statue were widely denounced, as was the appearance of swastikas and other objectionable symbols among the protesters. The protests got more terrible PR when Ottawa’s Shepherds of Good Hope soup kitchen said its staff were harassed and a client was assaulted by “Freedom Convoy” protesters. (Donate here.)

Lost the room: In the Citizen, Kelly Egan writes that the protesters lost the room.

Instead of talking about vaccine mandates and harmful lockdowns, all anyone could talk about Saturday evening was the video clip of a young woman dancing on the Tomb of the Unknown Soldier at the National War Memorial and using a statue of Terry Fox as a kind of political prop. It wasn’t long before everyone from the mayors of Ottawa and Port Coquitlam, B.C., to the defence minister and Canada’s top soldier were denouncing the violation of sacredness. So, straight away, you’ve lost the audience, regardless of whether the offenders were just freelance agitators or just a little stupid. It’s your convoy, you wear it.

Popular elsewhere: While the protesters may have lost the room, they have raised $9 million, won the support of Donald Trump and Elon Musk and captured headlines around the world.

Writing for the Daily Beast, Justin Ling captures the mood of the moment:

The blockade is perhaps the most drastic, organized, COVID-19-inspired demonstration the world has yet seen. Its organizers are a Voltron of various political factions: There’s the right-wing nationalist who is vowing to blockade MPs’ homes; the QAnon follower who wants Trudeau tried for treason; the political activist running a $7 million fundraiser, trying desperately to stop GoFundMe from seizing the dough; and a plethora of other characters who have assembled to shut down the capital.

Their mix of pseudo-science, grassroots organizing, and a dash of legal mysticism have combined to create a really potent rally cry. And while the parka-clad protesters, shivering in sub-zero temperatures, may look perfectly Canadian—it may be a sign of things to come elsewhere.

Very real distress: In Le Journal De Montréal, Emmanuelle LaTraverse has a thoughtful column (translation) in which she notes the incoherence of the protest—full of “nonsense and conspiracies,” but points to the challenge of the moment—”very real distress. That of thousands of people who can’t take it anymore.”

For 22 months, the political class led the battle to set an example. Obligatory passage to ensure essential social cohesion in the face of an unprecedented crisis. The vaccination obligation has become a weapon of choice in this political and health war. But at the end of this fifth wave, the population expects more nuance from its leaders.

Bad for O’Toole: While Justin Trudeau said nothing, having left his official residence for security reasons, the pressure seemed to mount on Erin O’Toole, whose MPs stayed away from cameras on Sunday after taking heat for being too close to the heart of the action on Saturday.

In the Star, Supriya Dwivedi laments that the Conservatives keep “pandering to the extremist elements of their base,” and Robin Sears suggests O’Toole may soon be replaced by Pierre Poilievre, although he predicts that under his leadership the party “would probably do worse that any leader since Kim Campbell. Liberals and New Democrats will be drooling at the prospect of a contest with him.”

Trapped: In Maclean’s, Philippe J. Fournier takes a close look at O’Toole’s dismal personal approval numbers and concludes that he’s in deep trouble with his own party, which may be be why he met with truckers.

The available data could hardly be clearer: There is simply little to no room to grow for O’Toole among non-CPC voters, which may partly explain why O’Toole has looked and sounded like he’s running for the CPC leadership again of late, and not like the leader of a government in waiting. Obviously, we cannot ignore the elephant in the room: All these numbers predate this weekend’s hectic events in Ottawa, so it will be fascinating to see whether they move the needle at all for O’Toole and the CPC in the coming days.

Fournier wonders is something else is going on.

Perhaps it is a toxic minority trying to take over the CPC that is sinking O’Toole in public opinion and hindering any efforts to grow the party, not the other way around. Perhaps the true division decried by politicians right now lies not with the average Canadian voter, but within the Canadian conservative movement itself.

Leadership politics: Making a similar point on CTV, Gerald Butts noted that the data collected by the convoy organizers could be valuable in a CPC leadership struggle.

Border closed: Jason Kenney has called for the end of a demonstration blocking a southern Alberta border crossing, the Calgary Herald reports, although he failed to mention that the protest was attended by one of his own MLAs.

Troops moved west: Anita Anand said Sunday all Canadian troops in Ukraine have been moved west of the country’s Dnieper River as worries about a Russian invasion grow, the Globe reports from Kyiv.

Not coherent: In Maclean’s, Paul Wells takes a close look at the government’s action and rhetoric on Ukraine and finds they don’t match.

I don’t think it’s nitpicking to say that the government’s actions and rhetoric are starkly out of proportion. Freeland is describing an existential threat to democracy; Trudeau is packing for a weekend road trip. If this test is in any way comparable to the one “our own parents and grandparents… fought and died” for, then don’t send a smaller deployment then you sent last year to the old-folks’ homes of Quebec and Ontario, and don’t promise to airlift the drill sergeants home at the first sign of trouble. And if it’s not that kind of test, then stow the Patton speeches and the back-patting.

Joni unstreamed: As anti-mandate Canadians in trucks made headlines on Friday, one of Canada’s greatest musical legends—Joni Mitchell—made headlines of another sort, when she announced that she would follow Neil Young in yanking her music from Spotify to protest people “spreading lies that are costing people their lives.” The move will cost her and Young—both childhood polio survivors—a lot of money, Billboard reports. Spotify, which has lost a lot of money because of this, announced Sunday it would put “advisory notices” on some content, the Times reports.