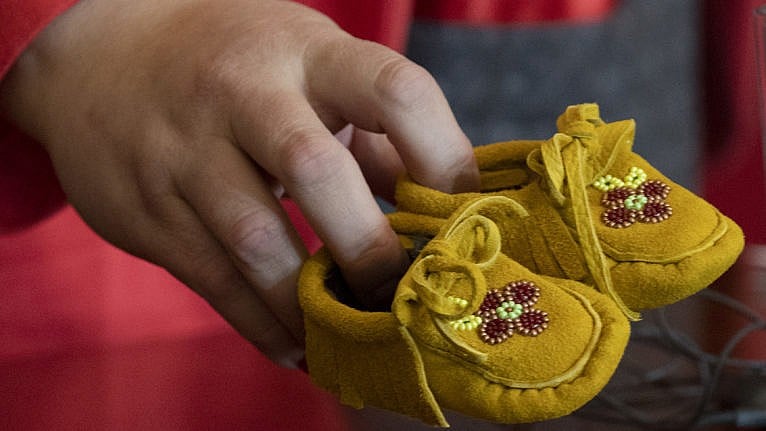 AFN Regional Chief Cindy Woodhouse picks up a pair of children’s moccasins she had placed on her desk at a news conference, Jan. 4, 2022 in Ottawa. (Adrian Wyld/The Canadian Press)

Compensation, reform: Ottawa announced Tuesday it has agreed to compensate First Nations children harmed by its underfunding of child welfare, providing $20 billion for compensation and $20 billion on reforming the system over five years, CP reports.

First Nations Child and Family Caring Society of Canada executive director Cindy Blackstock said Tuesday that the agreement in principle is an important first step, but noted it is non-binding.

“These are simply words on paper,” she said at a separate news conference. “We need to commit ourselves to keeping watch on the government of Canada and holding it accountable until it lands some of these things.”

The Child and Family Caring Society, along with the Assembly of First Nations, brought forward the initial 2007 human rights complaint that set off the 14-year battle over Ottawa’s handling of child welfare for First Nations children. Blackstock credited increased public pressure for the arrival of the agreements in principle, especially in light of First Nations uncovering what are believed to be unmarked graves of children forced to attend former residential schools.

Inaction on NORAD: Glen VanHerck, commander of NORAD, came to Ottawa recently to discuss the grim new realities of continental defence with Anita Anand and Gen. Wayne Eyre. Paul Wells, in Maclean’s, writes that Canada is not responding appropriately to the threats VanHerck outlined.

But not deciding is a decision: when the Americans make command decisions on missile defence, they do it without their Canadian counterparts present, and NORAD stops being NORAD for the duration of the conversation. To the extent that the Americans need to ensure their continental defence in the absence of our half of the continent, they’ll simply proceed without us. At some point that becomes embarrassing. This is the kind of decision Justin Trudeau hates to make. He’d get no credit from his voter base for making North America more secure against threats many voters don’t believe exist, in concert with an ally many don’t think is worthy.

Milk victory! Both sides have claimed victory in a trade dispute between Canada and the United States over dairy imports, CP reports.

At the heart of the dispute is how Canada has distributed its tariff-rate quotas, or TRQs — the quantities of certain dairy products like milks, cheeses, powders, yogurt and even ice cream — that can be imported at lower duty levels under the terms of the USMCA, which Ottawa prefers to call CUSMA. U.S. trade officials and dairy industry advocates say a large share of those quotas have been allocated to processors rather than producers, effectively denying U.S. farmers their fair share of the supply-managed Canadian market.

Off sick: 200 city of Edmonton employees are off work after testing positive for COVID-19, including 51 firefighters who are a part of an outbreak, CBC reports.

No vacation: Overworked Quebec nurses are being told to cancel their vacations to keep the health-care network afloat, CTV reports. “This is my eighth shift in a row,” said ER nurse Joanne Scullion. “I need a day off. I can’t work tomorrow, physically or mentally, I’ll make a mistake.”

Crunch coming: B.C. health officials warned Tuesday that  businesses could soon be dealing with major staffing shortages due to Omicron, CTV reports. “We need to anticipate that as many as a third of your workforce at any one time may become ill with COVID-19,”Dr. Bonnie Henry said. “We need to adapt businesses so we can operate at these reduced numbers.”

Deadly delay: Tasha Kheiriddin, writing in the Post, criticizes Doug Ford for acting too slowly to tackle Omicron, imposing half measures in December.

But a 50 per cent reduction in capacity didn’t translate to cutting contacts by 50 per cent. A true circuit breaker would have gone even further than what the province is doing now. It would have meant completely shutting down all businesses representing an increased risk of transmission and telling people not to celebrate the holidays with anyone other than members of their household. Why did Ford not bite the bullet before Christmas? The only answer, in this election year, is politics.

Divisive? Also in the Post, John Ivison is worried about the lack of moderation creeping into public life, pointing to election campaign comments in which Justin Trudeau said anti-vaccine protesters did not believe in science and were often misogynistic and racist.

Still missing it: In the Star, Susan Delacourt has a charming and nostalgic column on the days when the Blackberry swept into Ottawa, occasioned by the news that the operating system is no more.

Extremist locked up: Former Calgary mayoral candidate Kevin J. Johnston was arrested after failing to show up to a Toronto courthouse to begin serving a jail sentence, CBC reports.

[Calgary police] said Johnston was arrested by the U.S. border patrol agency early Tuesday while attempting to cross the Saskatchewan-Montana border on foot. “He is being held in the town Plentywood, Montana, while we work to have him returned to Canada,” the statement from Calgary Police Service (CPS) spokesperson Brittany Klassen said. Johnston had been wanted in Ontario and Alberta after failing to show up for jail sentences in both provinces.

The Canadian Centre for Policy Alternatives (CCPA) report examined the 100 highest-paid CEOs at publicly traded Canadian-based companies for 2020. It found that their average annual compensation totalled $10.9 million — $95,000 more than their average pay in prepandemic 2019.

“While [2020] was really a pretty bad year for most Canadians, particularly lower paid working Canadians, many of whom lost their jobs … it wasn’t at all a bad year for CEOs,” said David Macdonald, report author and senior economist with the CCPA, a think-tank that studies economic inequity.