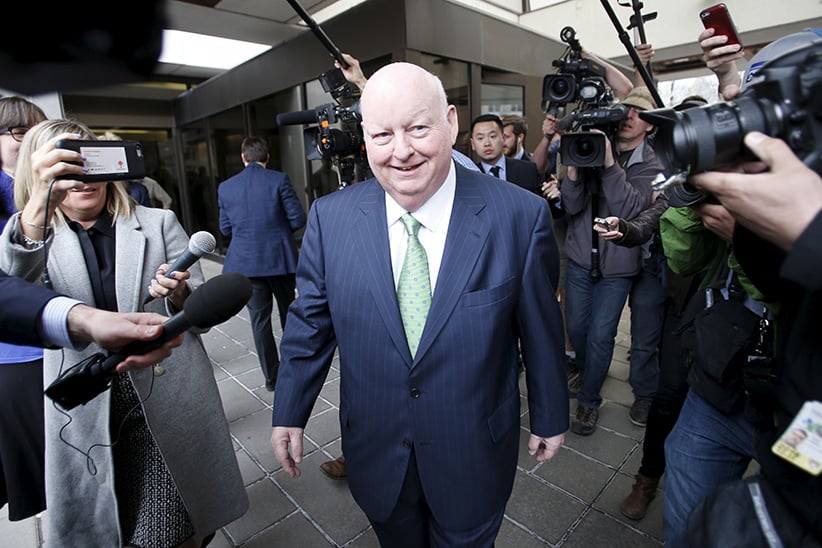 Senator Mike Duffy leaves the courthouse after being cleared of bribery and fraud charges in Ottawa, Canada, April 21, 2016. (Chris Wattie/Reuters)

OTTAWA — The Senate says that seven expense claims totalling $16,995 which came up during Sen. Mike Duffy’s criminal trial weren’t eligible under the upper chamber’s spending rules. Here are the details of the seven claims the Senate wants Duffy to repay:

1. Duffy paid $505.18 between November 2011 and March 2012 for a mobile data plan for a temporary worker in his office, Diane Scharf. The money came out of a consulting contract Duffy signed with a former acquaintance. Ontario Court Justice Charles Vaillancourt wrote in his ruling that the spending didn’t add any “new net cost to the Senate” because the money had already been allocated under the consulting contract. He said Scharf’s BlackBerry was a job-related expense and “was an appropriate expenditure.”

2. Duffy paid $8 for photos of his son and daughter, but testified at trial that billing the cost to the Senate was unintentional. The money came out of a consulting contract Duffy signed with a former acquaintance.

3. Duffy paid $500 to a volunteer intern in his office, Ashley Cain, who did about 72 hours of work over a six-week period in 2010. Duffy testified that he believed it was within Senate rules to pay volunteers, and the money was an honorarium for her work. The money came out of a consulting contract Duffy signed with a former acquaintance. Vaillancourt said there was no criminal intent when Cain was paid “a modest stipend” and amounted to “an honest mistake on the part of Sen. Duffy.”

4. Duffy paid $300 to Jacqueline Lambert for makeup work as part of a 2010 appearance with then-prime minister Stephen Harper as part of the G8/G20 meeting. It was a last-second request when Harper’s office neglected to organize makeup necessary for a television appearance. The money came out of a consulting contract Duffy signed with a former acquaintance. In his ruling, Vaillancourt said the debate over whether the claim was appropriate was “best dealt in a non-criminal environment.”

5. Duffy paid $10,000 to his one-time personal trainer, Mike Croskery, as part of what he said was research to create a health promotion and fitness program tailored for seniors. The money came out of a consulting contract Duffy signed with a former acquaintance. Vaillancourt said Croskery was a consultant to Duffy, not a personal trainer, but that “it would have been preferable to have a formal contract” laying out the new relationship between the two.

6. Duffy paid Nils Ling $2,500 for a speech delivered at the 75th anniversary for the Canadian Federation of Agriculture. Duffy, who was on the Senate’s agriculture committee at the time of the speech, called it a “foundational speech,” which Vaillancourt said made it “an appropriate expense for Senate resources.” Duffy was paid $10,000 to deliver the speech; Vaillancourt said Senate funds shouldn’t be used for personal gain, but that Duffy didn’t have any criminal intent when he paid for the speech.

7. Duffy charged the Senate $3,142.48 for travel to Ottawa for a speech to the Building Owners and Managers Association of Ottawa. He was paid a $10,000 speaker’s fee. Vaillancourt said the speech was a personal matter for Duffy, but wasn’t convinced the expenses contained any criminality. He also said Duffy conducted enough Senate business during the trip to warrant reimbursement.