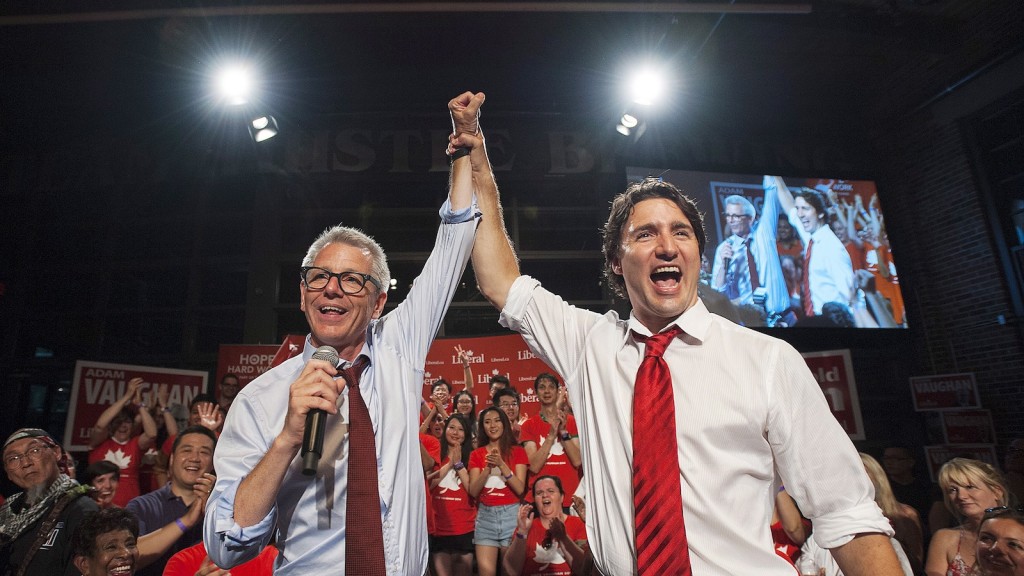 OTTAWA – Monday’s four federal byelections made one thing clear: Justin Trudeau’s Liberals have momentum on their side.

The Liberals stole one riding — the coveted Trinity-Spadina in downtown Toronto — from the NDP, easily held another Toronto riding and gave the Conservatives a run for their money in the Tory bastion of Fort McMurray-Athabasca, in Alberta’s oilsands heartland.

The Conservatives handily retained another Alberta riding, Macleod, but even there, Liberal support almost quadrupled.

The results reflect just how far the Liberals, reduced to a third-party rump in 2011, have bounced back in the year since Trudeau took the helm, increasing their share of the vote in all four ridings over 2011 — dramatically so in three of them.

Conservatives and New Democrats, on the other hand, lost vote share in all four.

The biggest coup for Trudeau was snatching Trinity-Spadina from the NDP, a seat held since 2006 by Olivia Chow, widow of beloved former NDP leader Jack Layton.

Star Liberal candidate Adam Vaughan, a popular former city councillor, bested the NDP’s Joe Cressy by some 20 percentage points in the only riding where the New Democrats were a factor.

The win is a big boost for the Liberals in their battle with the NDP over which opposition party is best positioned to replace Prime Minister Stephen Harper’s Conservatives in next year’s general election.

Voters in Toronto “have sent a clear message that the Liberal party is the only progressive alternative to Stephen Harper,” Trudeau crowed in a written statement as the results became clear.

It could also be a portent of things to come in 2015. Trinity-Spadina has always been something of a bellwether: when the Liberals have won the riding in the past, they’ve won power nationally; when the NDP has won the riding, the Conservatives have taken power.

However, NDP Leader Tom Mulcair reminded disappointed New Democrats that Trinity-Spadina will not exist in the 2015 election. Due to redistribution, the riding will be divvied up among three new constituencies.

“The work you did now is in the bank,” Mulcair told party faithful at Cressy’s campaign party. “In 15 months … we’ll see you back here.”

Mike Layton, city councillor and son of the late NDP leader, reminded Cressy supporters that the riding has swung between Liberals and New Democrats for decades, and that even Chow lost in her first two attempts.

“Well folks, we’ve been here before, we’ve been up against these mountains and we’ve conquered them before,” Layton said.

The Liberals hung on Monday to another Toronto riding, Scarborough-Agincourt, where the Conservatives tried to appeal to the conservative values of the ethnically diverse suburban population with attacks on Trudeau’s support for legalization of marijuana.

The riding had long been the personal fiefdom of Jim Karygiannis, a bare-knuckle political brawler who held the seat for the Liberals for 25 years before quitting to run municipally. His departure gave Conservatives hope they could score an upset.

But in the end, Liberal Arnold Chan, a lawyer and former political aide, actually increased his party’s share of the vote to almost 60 per cent —up about 15 points from 2011 and some 30 points ahead of Conservative Trevor Ellis.

Chan called his victory a repudiation of the Conservative party’s “negative attacks” on Trudeau, accusing it of trying to suppress votes by scheduling the byelections for the day before Canada Day, when many voters were taking an extended weekend.

Turnout was actually highest in Trinity-Spadina, at just over 30 per cent, and Scarborough-Agincourt, where it fell just shy of the same mark. Less than 19 per cent of eligible voters turned out in Macleod and only 15 per cent in Fort McMurray.

In Fort McMurray, the Liberals surged from a meagre 10 per cent of the vote in 2011 to more than 35 per cent — enough to put a scare into the Conservatives, if not defeat them.

David Yurdiga, former reeve and Athabasca county councillor, captured about 47 per cent of the vote to hold the seat for the governing party, besting Liberal Kyle Harrietha by roughly 12 percentage points. But the Tory share of the vote was still down significantly from the 72 per cent it won in 2011.

The surge in Liberal support in Fort McMurray suggests Trudeau is managing to turn around perceptions of his party in Alberta — a political wasteland for the Grits since Trudeau’s late father, Pierre, imposed the reviled national energy program more than three decades ago.

“Huge numbers of Liberals that we’d never before seen came out and sent a very, very clear message: that Albertans are tired of being taken for granted and are looking very closely at the 2015 election,” Trudeau told party faithful at Vaughan’s victory party.

In the southern part of the province, former newspaper editor John Barlow held Macleod for the Conservatives. He captured about 69 per cent of the vote — more than 50 points ahead of his nearest competitor, Liberal Dustin Fuller.

Still, even in Macleod, the Tory vote share was down about 10 points from 2011 while the Liberal share almost quadrupled.

“This is the culmination of eight months of hard work and it definitely feels worthwhile today,” Barlow said in a victory speech that came just 30 minutes after the polls closed.

More than 100 supporters cheered loudly when he entered the Italian restaurant in High River, accompanied by his wife Louise and children.

“What this really came down to was passion and how hard we worked. The message we had is Macleod is not going to be forgotten. We cannot take Macleod for granted.”

Barlow said he intends to locate his constituency office in High River, which has been decimated since massive floods last year turned the town’s streets into rivers of water.

“If there’s one issue that really bound Macleod together over the past year was that flood,” he said.

“We have a lot of work to do and I will be here from this day forward to make sure that work gets done.”