MacDonald's advice to those aspiring to office: learn to 'relate to the difficulties somebody down the street is having' 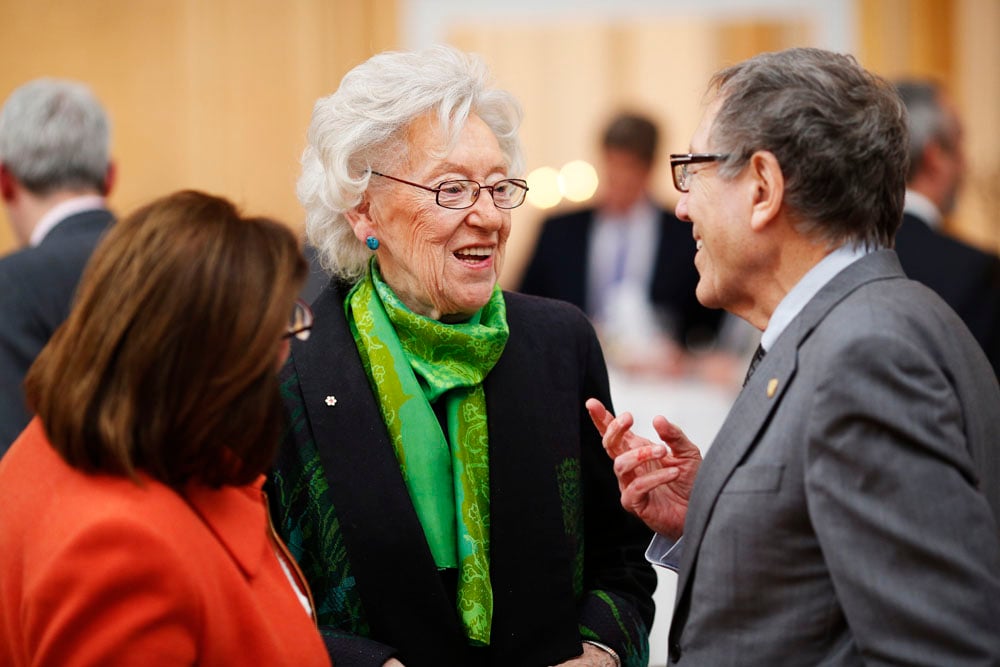 Longtime MP Flora MacDonald has died. Former prime minister Joe Clark used Twitter to note the loss of his former colleague. “I mourn the passing of Flora MacDonald, whose compassion, leadership and example changed lives across our country and around the world.”

On Nov. 18, 2014, at the Maclean’s Parliamentarians of the Year gala, MacDonald received a Lifetime Achievement Award. Here’s Ottawa Bureau Chief John Geddes on her legacy:

The living room window of Flora MacDonald’s 11th-floor apartment in Ottawa affords a sweeping view of a broad curve of the Rideau Canal. Casting a weather eye over the water last week, MacDonald, 88, reminisced about skating to work on the canal when she was a cabinet minister in Brian Mulroney’s government in the 1980s. That memory, in turn, takes her back to the frozen lakes of Cape Breton Island, where she was a champion speed skater in her youth.

She brought more than a strong skating stride from her upbringing in North Sydney, N.S., to her storied career in politics. MacDonald, this year’s recipient of our Lifetime Achievement Award for a former parliamentarian, says her abiding interest in world affairs was instilled in childhood. Her grandfather was a clipper-ship captain who sailed around Africa and South America. Her father, who ran North Sydney’s Western Union trans-Atlantic telegraph terminus, talked to his daughter daily about the newspaper’s foreign news. “It was a much better education than I ever got in school,” she says.

Her family was staunchly Tory. MacDonald landed an office job in the party’s national headquarters in Ottawa in 1956, in time to work on John Diefenbaker’s winning campaigns in 1957 and ’58. Despite not liking Diefenbaker much, she rose to key roles in the Progressive Conservative party apparatus through the 1960s. She was far closer to Dief’s successor, Robert Stanfield. “He was never a great orator, but he was a tremendous thinker,” she says. Under his leadership, in 1972, MacDonald was elected MP for Kingston and the Islands, the Ontario riding once held by Sir John A. Macdonald. She delights in recalling her slogan: “From Macdonald to MacDonald.”

After being beaten in three successive elections by Pierre Trudeau, Stanfield stepped down in 1976. MacDonald challenged for the Tory leadership, the first woman to seriously vie to lead the party at the federal level. But delegates who pledged to vote for her defected to other candidates—prompting some pundits to label it “Flora syndrome” when a politician’s support mysteriously evaporates. Joe Clark won and defeated Trudeau in 1979, forming a short-lived minority government, in which MacDonald served as Canada’s first female external affairs minister. Her qualifications? “I had been hitchhiking around the world for years,” she laughs.

Clark’s government survived a few months, but MacDonald was back in cabinet in 1984 under Mulroney, with files such as employment, immigration and communications. She was defeated in the 1988 election, but soon threw herself into international development, taking on key roles with groups from the Carnegie Commission on Preventing Deadly Conflict to the International Development Research Centre.

Working closely with an Afghan-Canadian, Abdullah Barat, she began travelling regularly to remote parts of Afghanistan in 2001, when the Taliban was still in control. In 2007, she founded Future Generations Canada, an aid group that supports schools, health and farming projects in Afghan villages, many of which she visited herself. Asked how, as a senior citizen, she handled the dangers of travelling in Afghanistan’s mountains, MacDonald shrugs and says, “Abdullah,” crediting her remarkable partner in the non-profit group.

She’s pleased to inspire Canadians to care about the world, but ambivalent about being seen as a role model for women in particular. Asked about efforts to encourage more women to run for office, she says, “I’ve seen groups of women do that since I’ve been around the political scene; I’ve never considered it particularly healthy.” MacDonald says her advice to women aspiring to elected office is the same she gives men: Polish your public speaking skills and learn to “relate to the difficulties somebody down the street is having.”

View the full list of the 2014 Parliamentarians of the Year award winners.