Report also states there is proposal to erect a new building on the site, replacing pool house 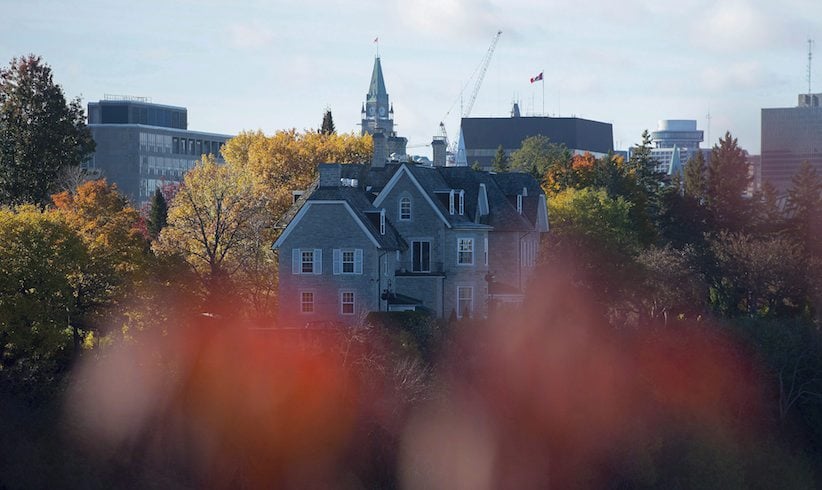 The Canadian prime ministers’ residence, 24 Sussex, is seen on the banks of the Ottawa River in Ottawa on Oct. 26, 2015. THE CANADIAN PRESS/Sean Kilpatrick

OTTAWA – A report from iPolitics says restoration and repairs to the prime minister’s residence at 24 Sussex Drive, including building a new annex with private quarters and a pool, could cost almost $38 million.

The online news site says documents provided mainly by development consultants Marshall & Murray Inc., and Ottawa-based KWC Architects, with numbers up to date as of last February, suggest renovations to the main building to replace the electrical system, install new exterior windows and doors and build a new sun room, among other things, are projected to cost $13.49 million.

The report says there is also a proposal to spend another $11.99 million to erect a new building on the site, replacing a pool house built for Pierre Trudeau in 1975.

It says the existing pool house would be demolished and replaced by new living quarters for the prime minister, leaving the existing residence to accommodate state and support functions.

The report does not detail all the costs involved.

Related: William Thorsell: Why it’s time to tear down 24 Sussex

The National Capital Commission, which is working on plans for the future of the 24 Sussex building, says no decisions have been made.

After his election last year, Prime Minister Justin Trudeau declined to move into the decrepit mansion and, instead, set up his household at Rideau Cottage on the grounds of the Governor General’s residence.

The 24 Sussex building, which was completed in 1868, was expropriated by the federal government in 1943. Seven years later, it was decided to use it as a home for the prime minister and Louis St. Laurent was the first to live there, starting in 1951.

In 2008, the auditor general found the building to be in poor shape.

Related: Could fixing up 24 Sussex be a reality TV series?

The report said the windows and caulking were cracked, with loose tracks, which leaked heat. The window air conditioners were nearing the end of their service lives. They were noisy and inefficient and weakened the windows.

The wiring was 50 years old and was at maximum capacity. The plumbing was considered deficient. Service areas such as the kitchen and the basement laundry were “not functional.”

“Among other things, the ceilings and interior walls of the residence will have to be opened up to install new air ducts for ventilation and air conditioning, to replace old electrical wiring, to install a sprinkler system for fire protection, to remove toxic materials, such as asbestos, or to monitor such materials, and to retrofit the service areas,” the auditor general reported.

According to the report, the only element of the exterior that was in good condition was the roof, which was re-done in 1998.