338Canada: A bilingual Tory leader? The numbers say it matters.

Philippe J. Fournier: A new Léger poll shows Canadians favour a bilingual leader—and without one the Conservatives could face a crushing defeat 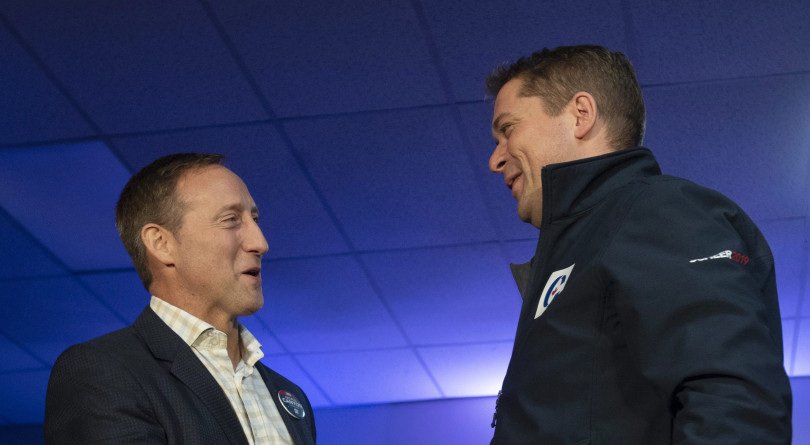 Since the Conservative leadership race began, many Canadians and political observers in this country have been asking—and trying to answer: “Should the leader of a federal party be able to speak both official languages?”

Opinion pieces and editorials came aplenty. Even elected officials chimed in. Most notably, Conservative MP Michelle Rempell (Calgary-Nose Hill, AB) argued the question of bilingualism took too much space in the current discussion. Others have made it clear that without a Conservative leader at least capable of basic communication skills in French, perhaps the CPC should just hand the keys of the next election to Justin Trudeau.

Undoubtedly, some Canadian voters probably agree with Rempel, but what does the data actually say? The pollster Léger went in the field last week and asked Canadians their view on the matter. The results, published in the pages of Le Journal de Montréal (translated headline: “Impossible to beat Trudeau without a bilingual leader”), are interesting to say the least.

Respondents were asked: “Should the next Conservative leader be bilingual, meaning capable of speaking both English and French, or is it not necessary?” A clear majority of respondents, 62 per cent, believe the next CPC leader should be bilingual. Only 35 per cent answered that bilingualism was not necessary. A regional breakdown of the results shows that support for bilingualism leads or is at least statistically tied in every region of the country (see image below):

[Image taken from the Journal de Montréal article, which may be found here.]

Moreover, support for bilingualism for the next CPC leader is highest in Quebec, Ontario and Atlantic Canada—therefore in provinces where Conservatives need to grow their support the most if they hope to win the next election.

However, there is still the legitimate question of whether the CPC would actually shed support to its rivals with an English-only speaking leader. Yes, the data suggests that most Canadians would prefer a bilingual Prime Minister, but would this preference actually change voting intentions should CPC members decide to go with a non-bilingual leader?

In order to compare the results, Léger first asked respondents their voting intentions. The national numbers are on par with the current polling average: The Liberals (34 per cent) and Conservatives (32 per cent) remain in a statistical tie, with the NDP doing slightly better than last October with 19 per cent.

Then respondents were asked: “If a federal election was held today and the CPC leader was not bilingual, which party would you most likely support?”

The results are staggering. Here are the results of decided respondents: 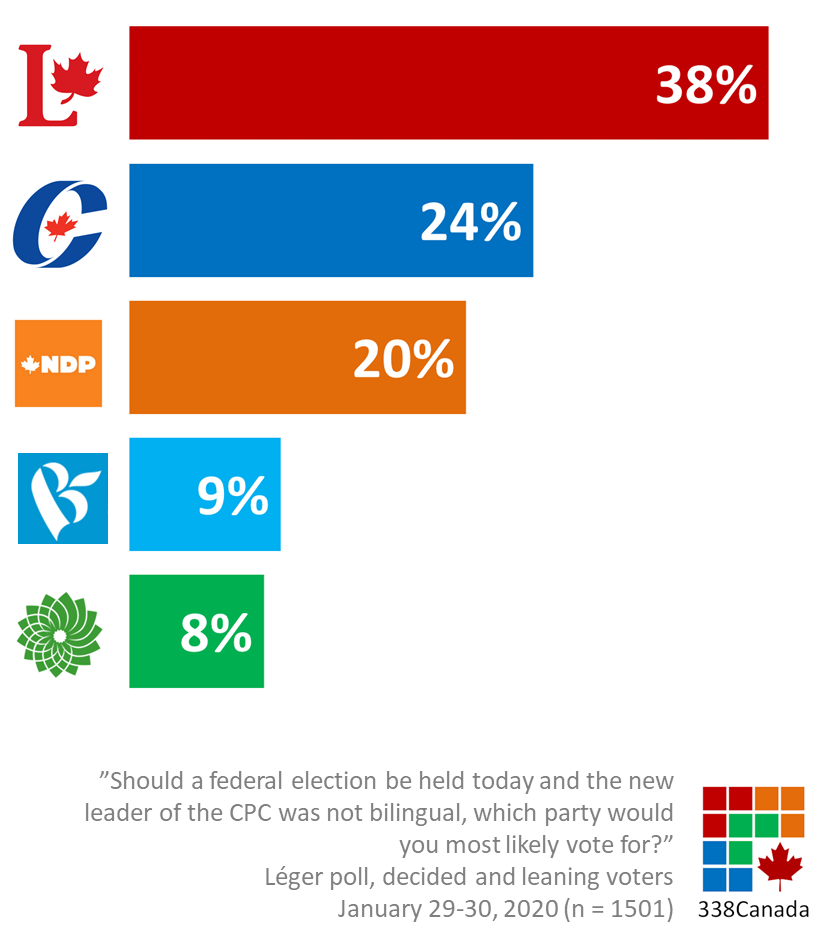 In this hypothetical scenario (a non-bilingual CPC leader), the Liberals would take a commanding lead over its main rivals and would be on course to a crushing majority in the House of Commons. The Liberal Party receives the support of 38 per cent of decided respondents—14 points ahead of the Conservatives.

In Quebec, Conservative support would plummet to single digits and, according to Léger, the CPC would also lose crucial support in Ontario. Léger’s data indicate that the Liberals would stand more than 20 points ahead of the CPC in the province. Last October, the CPC won 50 seats east of the Manitoba-Ontario border. By deconstructing these hypothetical numbers, the 338Canada model would project that Conservatives would be hard pressed to win half that amount. And the Liberals? They could climb to around 200 seats from coast to coast.

While this debate could still rage on within partisan circles, the actual data from Léger is clear: Without a bilingual leader, the CPC is headed towards a sure defeat whenever the next election is held. For the sake of their party, CPC leader hopefuls better take notice.