A summer election would be a risky bet for the Liberals: 338Canada

Philippe J. Fournier: The latest federal election projection shows the Liberals falling short of a majority, with an outcome eerily similar to the results of the 2019 election 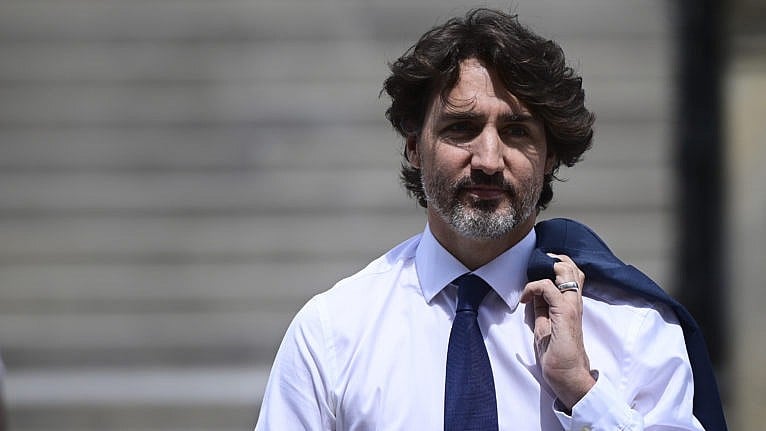 Trudeau makes his way to a press conference in Ottawa on June 8, 2021 (Sean Kilpatrick/CP)

If rumours swirling around Parliament Hill in Ottawa are true, then Canadians will be called to vote in the 44th Canadian federal election late this summer or early next fall, just days before this Parliament blows its second candle in October. Crunching the numbers over the weekend, the only question that kept popping in my head is: “Why?”

Both the Bloc Québécois and the NDP hold the balance of power in a Liberal-lead Parliament, hence neither party should feel any hurry to rush Canadians to the polls since both parties find themselves at their height of relevance. Time can feel like an eternity as a third or fourth party in a majority parliament.

Therefore, should an election be called, it will most likely entirely be a Liberal initiative. Cynics will say, not necessarily wrongly, that a fall election would be power-grab attempt by the Liberals: The numbers are currently favourable for the Liberal Party, and it would obviously much rather spend the next four years in a majority position, not having to worry about pesky opposition MPs asking questions or making occasional threats to vote against the government in a confidence vote.

Recent precedent would also stand on the side of an election in September or October. John Horgan, Blaine Higgs and Andrew Furey—all premiers leading their respective legislature with minority status one year ago—chose to bet on their provinces’ relatively good performance at handling the pandemic, and all three were re-elected with majorities. With a significant fraction of Canadians projected to be fully vaccinated by late August, the national discussion could gradually move away from the pandemic and dive into the handling of the economic recovery, so the Liberals could understandably be tempted to cash in some karma chips before the inevitable “What have you done for me lately?” feeling sets in. Politicians know that voters’ memory tends to be short.

However, are current numbers that good for the Trudeau Liberals? Perhaps the party’s internal polling is showing different trends than those of polls released for public consumption, because this week’s 338Canada federal update measures the most likely outcome as being eerily similar to the results of the 2019 federal election.

Federal polls published in the past month have shown the Liberals leading the Conservatives by margins between one and 11 points, with a current average of five points. With such numbers, the Liberals would almost assuredly win the most seats if an election were held this week, but the party would most likely end up short of the 170-seat threshold for a majority at the House of Commons. Here are this week’s averages per party:

The Liberals win an average of 163 seats, seven short of majority status, but only six seats above their 2019 results. While the Liberals remain dominant in Atlantic Canada and continue to lead in seat-rich Ontario, their only potential seat gains as currently projected would be found in Quebec, where the LPC averages 38 per cent and 41 seats. Nonetheless, let us remember that the Liberals won 35 Quebec seats in 2019 (and 40 in 2015). Given that the Bloc Québécois support remains in relatively good shape (just under the 30 per cent mark), it is rather unlikely that the Liberals can find many more seats to gain in the province. As for Atlantic Canada, adding Fredericton from the Greens doesn’t hurt (with Jenica Atwin crossing the floor from the Greens to the Liberals this week), but it’s unlikely to have any effect beyond this electoral district’s border.

As for the Conservatives, they appear stuck in a high-floor and low-ceiling scenario that would almost assuredly guarantee them Official opposition status. In the past month, the Conservatives have polled between 27 and 32 per cent nationally, and have shown no significant gain in Central Canada where the party needs it most. If it cannot grow its own support beyond the current numbers, the only scenario in which the party wins a plurality of seats would be if the NDP outperforms its polls and expectations.

To wit: The NDP’s current polling average in Ontario stands at 20 per cent, three points higher than its 2019 result in the province. Should the NDP’s vote in the next federal actually match its polling results, a net gain of six to 12 seats would be entirely plausible—and most of those seats would come at the expense of the Liberals. In the past week alone, both the Angus Reid Institute and Léger measured NDP support above the 20 per cent mark nationally, and even had the NDP getting the support of one in four Ontario voters (25 per cent from Angus Reid and 24 per cent from Léger). With such numbers, a complete 25-seat sweep of Toronto would be almost impossible for the Liberals (unlike in both 2015 and 2019 federal elections). Without a harvest of Ontario seats similar to those of 2015 and 2019 for the LPC, a majority would simply be mathematically out of reach for Justin Trudeau.

Naturally, the projection confidence intervals do stretch into majority territory for the Liberals. In these scenarios, the Liberals would have to outperform their current standings and hope the NDP fails to effectively get out its vote, especially in Ontario. In the waning days of the 2019 campaign, the polling average showed the NDP at 18 per cent nationally, yet it ended up with 16 per cent. This modest, but measurable two per cent gap probably cost the NDP a dozen seats from coast to coast, most of them in Ontario. We cannot discount the possibility that the NDP would fail to match its improving poll results, especially if the NDP relies on its support from younger voters (who tend to vote in lesser numbers).

Hence, with NDP support still hovering just under 20 per cent and the Bloc Québécois still riding the CAQ’s coattails in Quebec, where will the Liberals find enough seats to secure a majority? Perhaps an additional seat in Manitoba? Perhaps one seat in each of Edmonton and Calgary? Maybe retake Vancouver-Granville from independent MP Jody Wilson-Raybould? Nunavut? All of these “perhaps” and “maybes” add up to a lot of uncertainty, and make for a rather poor risk to reward ratio.