338Canada: The final polls are in, and they point to a slim Liberal victory

Philippe J. Fournier: It's no sure win for the Liberals but the final 338Canada vote projection puts them at 146 seats (11 fewer than 2019), and the Conservatives at 127 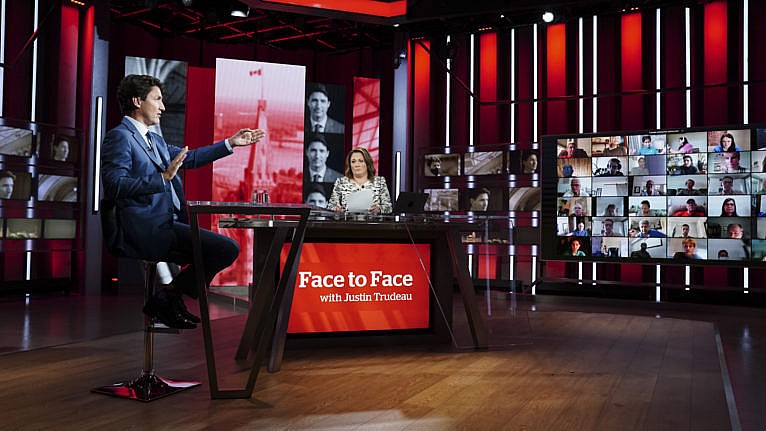 Trudeau prepares to appear on CBC's Face To Face with host Rosemary Barton in Toronto on Sept. 12, 2021 (Sean Kilpatrick/CP)

Update, Sept. 21, 12:46 a.m.: Trudeau won a third term while the Liberals will lead a minority government. Read the full story.

—Since the dissolution of the House of Commons on Aug. 15, more than 150 polls have been published by pollsters and media organizations across the country. Although each poll has its share of uncertainty and noise, once taken together, we were able to detect some distinct trends. 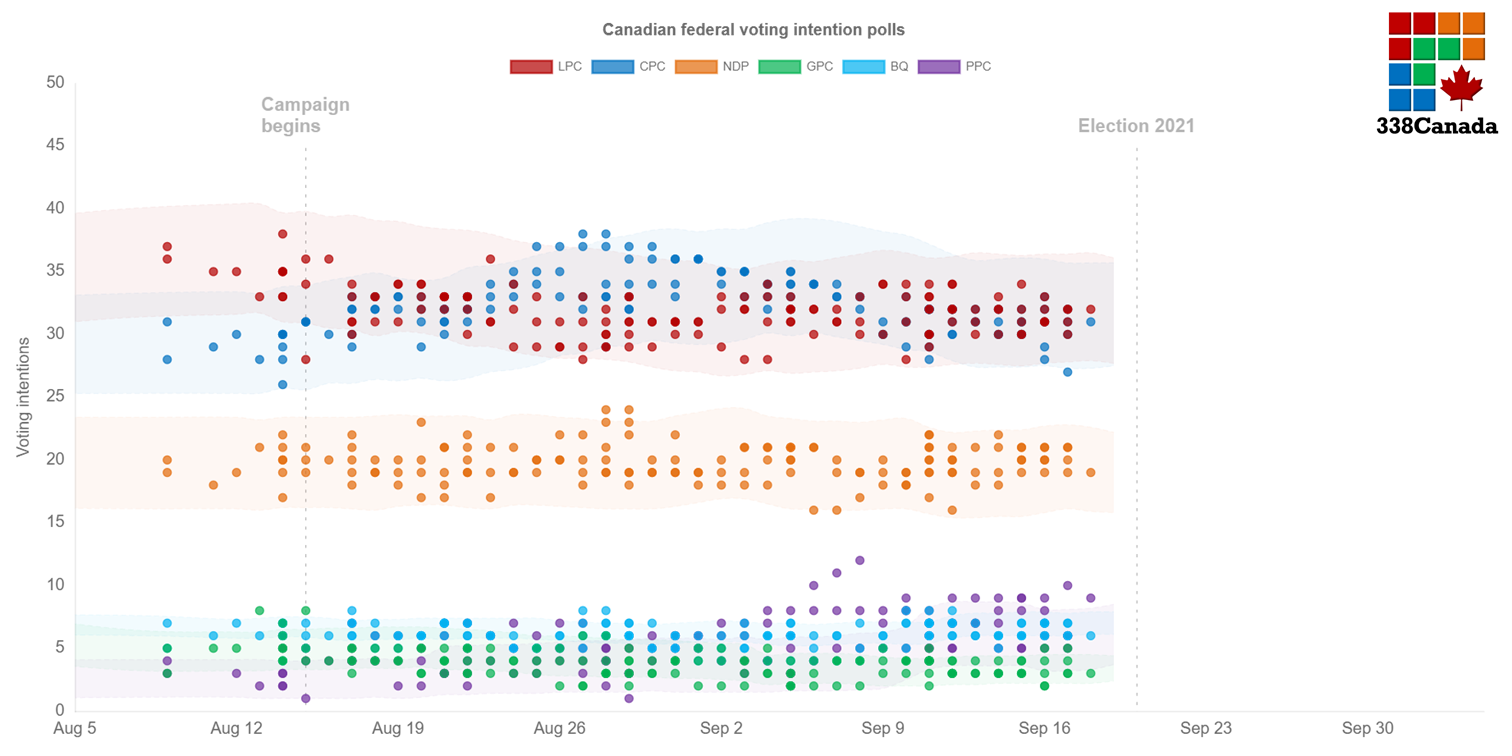 On Aug. 15, the Liberal Party (LPC) came out of the gate with a clear lead in voting intentions, but the gap between the LPC and the Conservative Party (CPC) started to narrow as early as day 2 of the campaign. While the Liberals appeared to be on cruise control, Conservative Erin O’Toole’s personal numbers began to improve (see this Abacus Data poll from mid-August). This trend continued until the first debate, held in Montreal for the TVA network. Then the numbers reached a stalemate.

After the Federal Commission debates, the most notable movement was detected in Quebec, where the Bloc Québécois, running a lukewarm campaign up to that point, saw its numbers climbing to eventually reach the party’s 2019 level of support in the province, dashing the hopes of significant CPC and LPC gains in Quebec.

Meanwhile out west, the Liberals appeared to slide to third place in British Columbia, although there isn’t a clear consensus on this in the final polls.

So here is where we stand with less than 24 hours to voting day. As of this writing, on Sunday evening, it appears the Liberal Party and Justin Trudeau are the odds-on favourite to win the most seats in Canada, although the gap between the two leading parties remains narrow. Several important variables remain unknown, and while there appears to be a consensus on national voting intentions, regional numbers—crucial for seat projections—differ from polling firm to polling firm. (See the full list of polls here.)

Here are the final polls from polling firms that published at least one poll during the campaign: 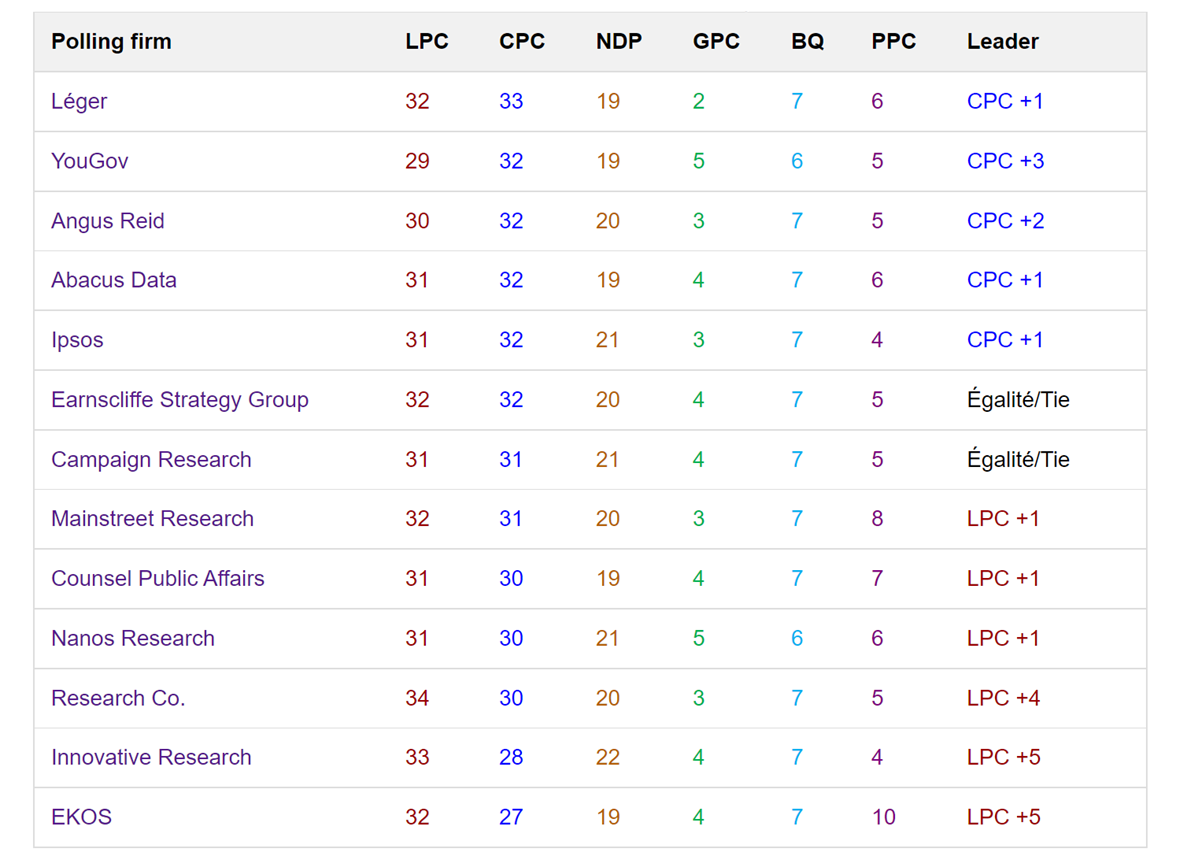 With few exceptions, most polls show the Liberals and Conservatives within two points of each other, a scenario much similar to the 2019 campaign when the CPC won the popular vote by one point nationally—by running up the score in Alberta and Saskatchewan, but failing to make gains in Central Canada.

The final 338Canada vote projection, unsurprisingly, has the Liberals and Conservative tied at 32 per cent apiece. The NDP takes third place with an average of 19 per cent. Should the NDP get its vote out tomorrow and translate these favourable voting intentions into actual votes, it would represent an increase of three points from 2019, and Jagmeet Singh could definitely hope to increase the size of his caucus. 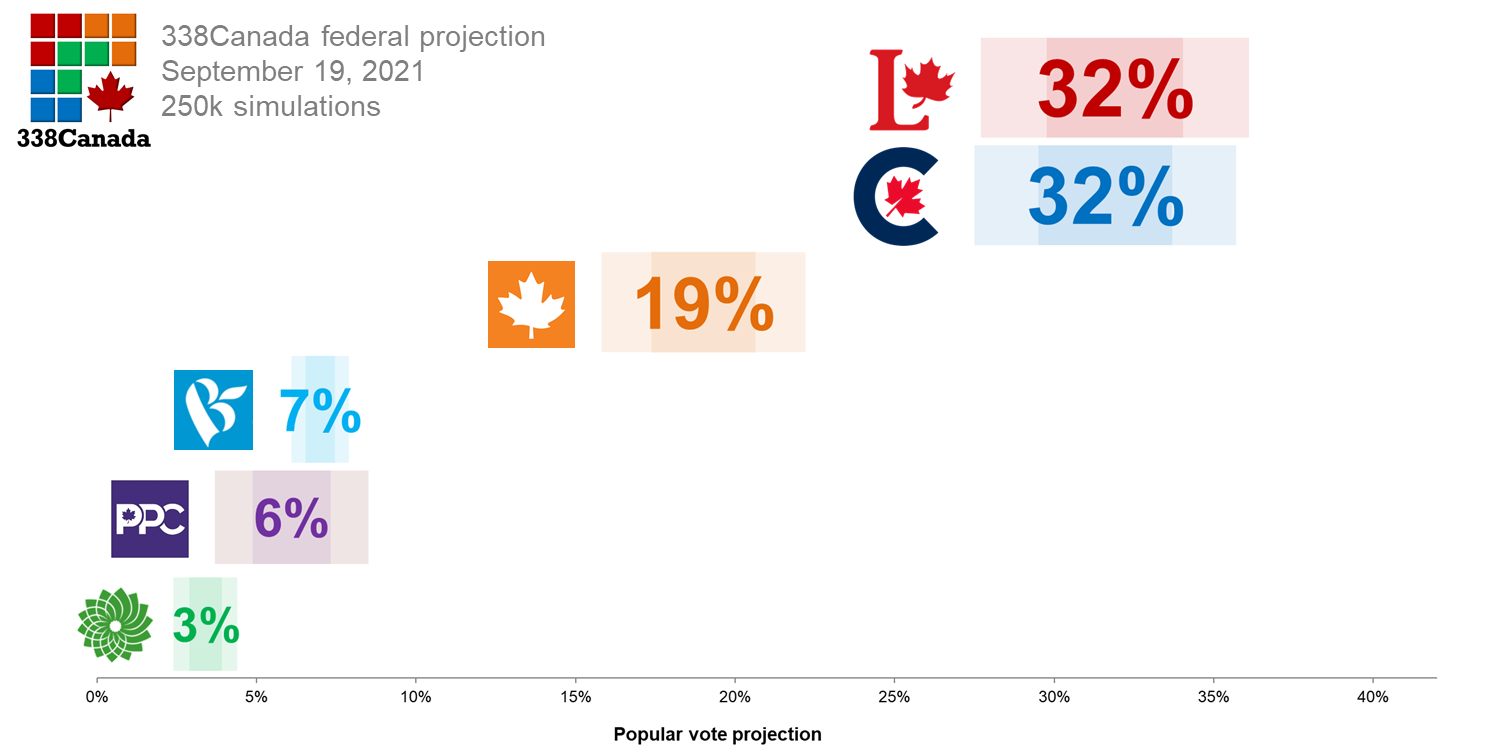 Using the aforementioned polls with the 338Canada federal model, we calculate the following seat projections: 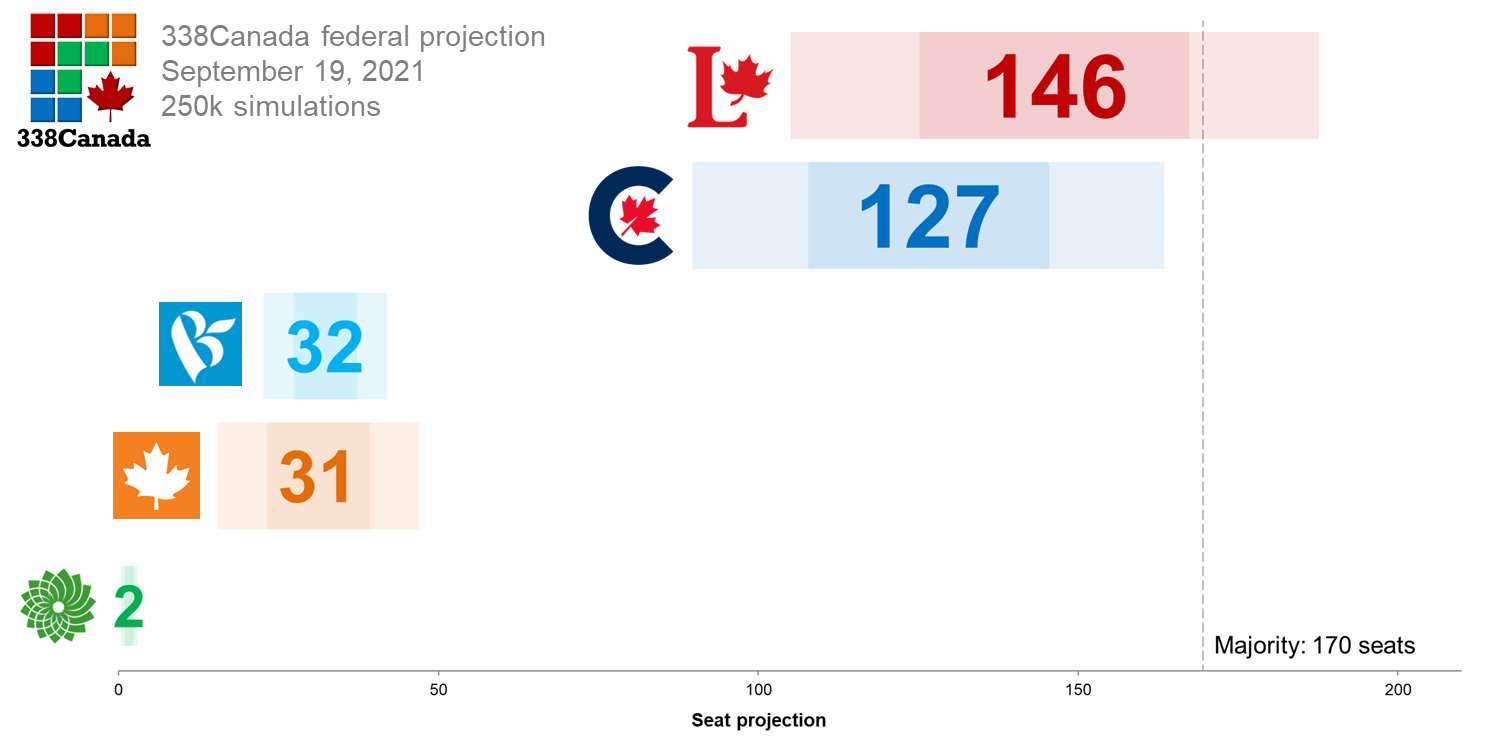 The Liberal Party wins an average of 146 seats, 11 seats fewer than in 2019, but still well within similar ranges as where the party stood two years ago. Nonetheless, looking at the regional breakdown of the vote projection, this number of seats for the Liberals may feel low. Why? Because the LPC is actually projected leading in 155 seats, but since so many of those are toss ups or too close to call, it brings the party’s seat average down.

The seat probability density is therefore asymmetrical: While the average is 146 seats, the most likely scenario is close to 155-160 seats. To reach such a total, the Liberals would have to win pretty much all the toss up districts projected their way. However, should the polls overestimate the Liberals by even one point (especially in Ontario), this optimistic outcome for the LPC would not probably not materialize: 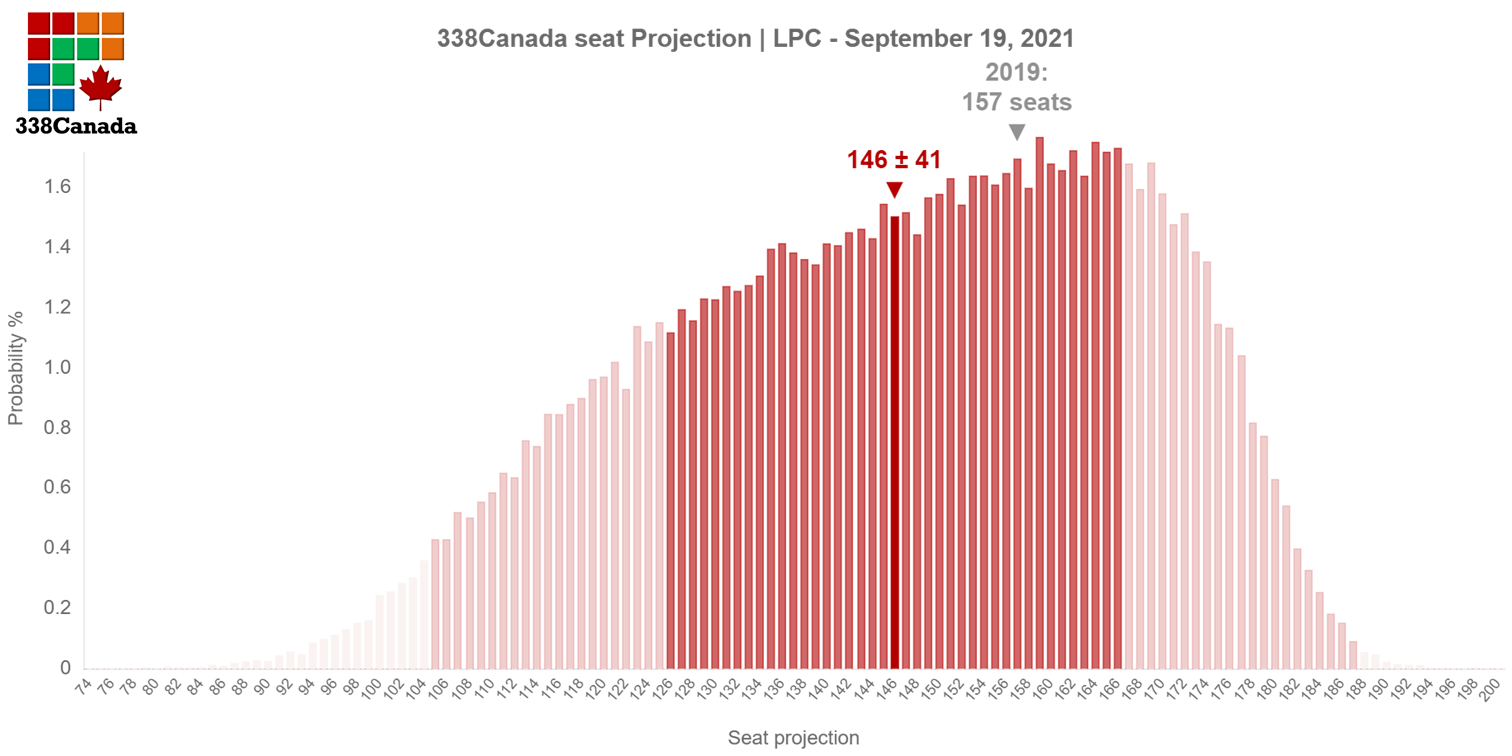 The Conservative Party wins an average of 127 ridings across the country, marginally above its 121-seat total under Andrew Scheer. Even though the confidence intervals between the two parties do overlap, the Conservatives have a much lower ceiling than the Liberals and they, too, would need a high vote efficiency to overcome this. Nevertheless, a modest poll error against the CPC could tip those numbers, especially in Ontario.

The 338Canada federal model grants the LPC at least a plurality of seats in 68 per cent of simulations, against 31 per cent for the Conservatives. We are far from a clear result here. In fact, we could use the analogy of a dice roll: One to three, the Liberals win a minority; Four, the Liberals climb to a majority; Five or six, and it is the Conservatives who win the most seats. 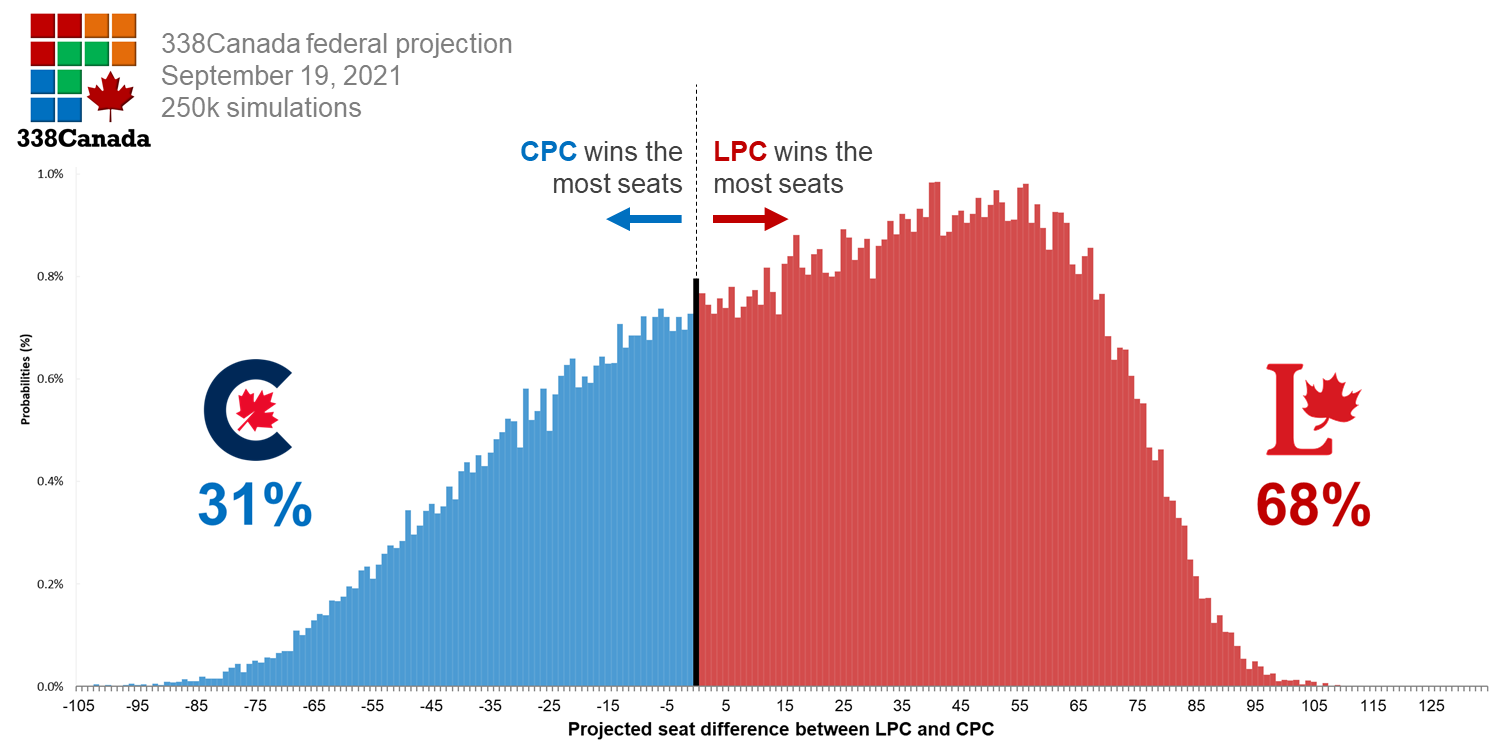 Hence, while one prefers to be the favourite heading to election day, two out of three chances of winning is far from a sure win for the Liberals. By way of comparison, according to some sports betting sites, the Las Vegas Golden Knights had two out of three chances of beating the Montreal Canadiens in the semi-finals of the Stanley Cup last June. And we know how that turned out. 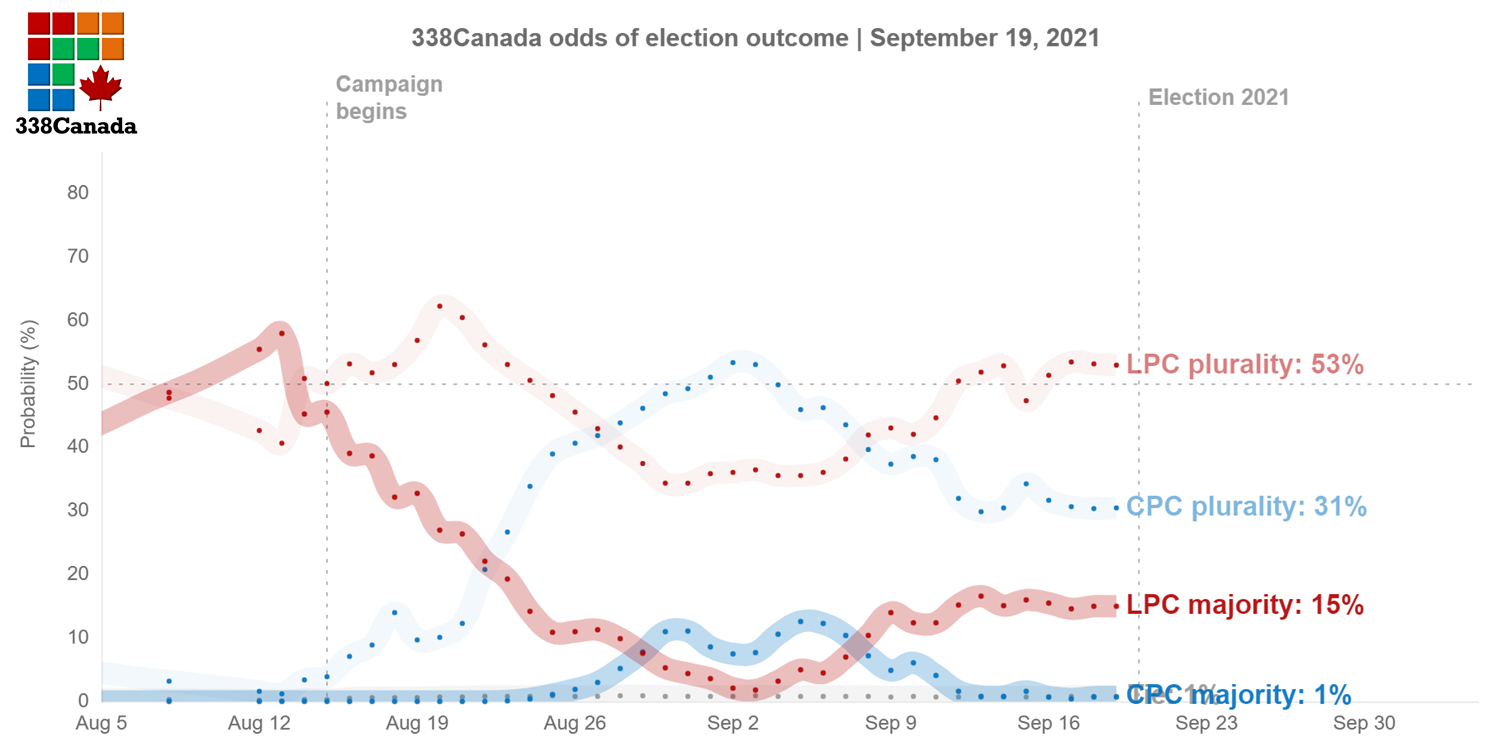 In closing, let us remind readers of this column that polls do not vote. The support expressed by respondents in polls is entirely theoretical. Polls do take the pulse of the electorate, but no further. In 2019, the 338Canada federal model correctly identified 299 of the 338 district winners, or nearly 90 per cent of the ridings. If the polls released in the last few days prove to be accurate Monday night and throughout the week (don’t forget the mail-in ballots), I am confident that the election results will be generally in line with the numbers of this projection. Nonetheless, humans are complex entities, much more so than electrons or galaxies, so any form of prediction about their behaviour will always contain a significant amount of uncertainty.

The Liberals are expected to win on Monday night. The data tells us that this is the most likely outcome. Additionally, should polls underestimate Liberal support, an LPC majority would even be a plausible scenario (probability of 15 per cent). And if the polls underestimate the Conservatives, especially in Ontario, Erin O’Toole’s CPC could tie or even edge out the seat count—but that is a big “if”.

Go vote, Canada. Many of you may not have wanted this election, but it is here. Don’t let others speak for you.