Philippe J. Fournier: The Liberals remain in strong minority territory, while the Conservatives sit near their unshakeable floor of 30 per cent support 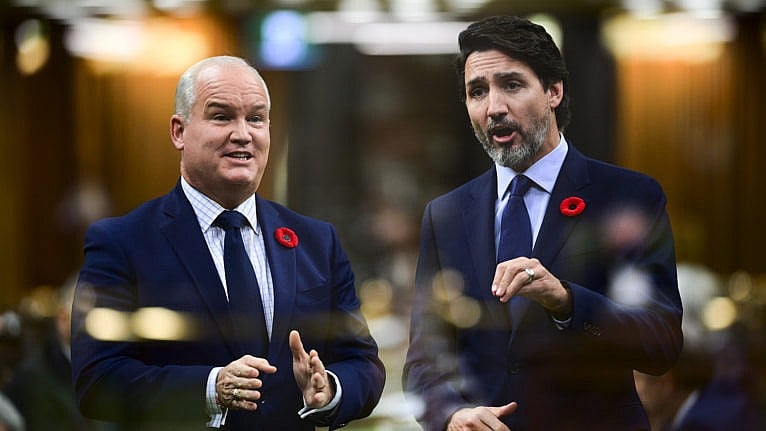 In the multiple-exposed image O'Toole asks a question and Trudeau answers during question period in the House of Commons on Nov. 4, 2020 (CP/Sean Kilpatrick)

Election season appears to have come to an end in Canada for 2020. Since September, three provinces sent their voters to the polls amid the intensifying COVID-19 pandemic: New Brunswick, Saskatchewan and British Columbia. It is worth noting that all incumbent parties in these provincial elections were re-elected to majorities in their respective Legislative Assembly. Evidently, the electorate’s desire for government stability has translated into actual votes this fall.

On the federal scene, voting intentions in Canada have remained mostly stable since late August, and the past weeks did not alter the current trends. Federal polls since the fall have shown the Liberals in the lead by a margin between two and 10 points over the Conservatives. The NDP remains at its expected average just below the 20 per cent mark. Here are the updated 338Canada vote projections:

The Greens remain, on average, close to their 2019 result of just under 7 per cent. The Bloc Québécois is holding its own in Quebec, with close to 30 per cent of voting intentions in the province, which translates into an average of 7 per cent nationally.

As stated above, voting intentions have remained remarkably stable over the past months. On Aug. 23, Durham MP Erin O’Toole won the CPC leadership. On that day, the Conservative Party of Canada was projected at 31 per cent nationally. Three months later, the CPC’s national projection is… 31 per cent. While we have not measured any significant “leadership bump” for the Conservatives since O’Toole’s leadership began, neither have we detected any slide below the party’s seemingly unshakable floor of 30 per cent of Canadian voters.

Here below are the popular vote projections since January 2020:

With current levels of support, the Liberals would be favoured to win a strong minority with an average of 165 seats, and would have a reasonable shot at a majority, although it would not be the most likely outcome.

While the Liberals’ lead in the national vote remains at a modest 4 to 5 points, the regional numbers still strongly favours the Liberals: the LPC maintains its dominance in Atlantic Canada, leads the way in Quebec, Ontario and British Columbia, and are statistically tied with the Conservatives in Manitoba. The Conservatives continue to dominate Alberta and Saskatchewan by wide margins.

With these numbers, Liberals wins the most seats in 94 per cent of all simulations performed by the 338Canada model:

These numbers could help explain why the Liberals dared the Opposition to a confidence vote one month ago, which ended up with the NDP playing, as Shannon Proudfoot put it: whatever is the opposite of kingmaker.

Indeed, many in the Bloc Québécois feel the party could legitimately make gains in the province (most likely at the expense of the Conservatives), while the Liberals still enjoy strong support in seat-rich provinces of Ontario and British Columbia. Although O’Toole would probably not admit it, looking back in hindsight, Jagmeet Singh may have done the Conservative leader a solid by voting with the government… Until the spring at least, when Parliament will have to vote for a budget expected to break all time records of spending and deficits.

For details of the 338Canada methodology, visit this page. For all 338 electoral district projections, visit the following regional pages: