Philippe J. Fournier: Even within his own party, the Conservative leader is increasingly viewed unfavourably, pointing to challenges ahead to grow the party's base 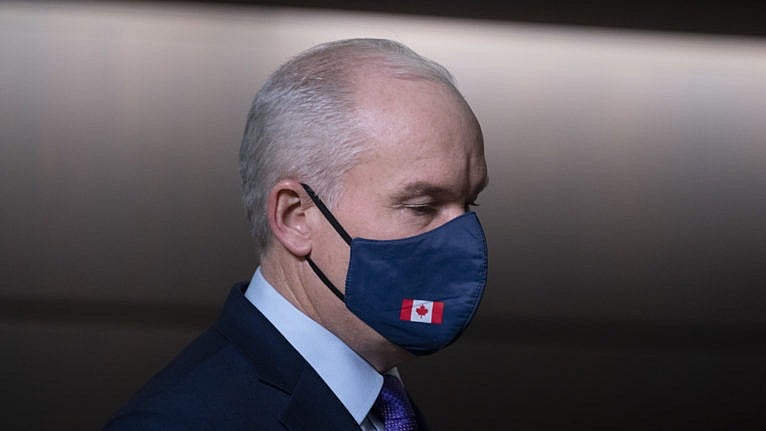 O'Toole walks to the podium at the start of a news conference on Parliament Hill on Feb. 26, 2021 (CP/Adrian Wyld)

Two federal polls were released in the past week, and both indicate there could be trouble on the horizon for the Conservatives—especially for CPC leader Erin O’Toole.

First: In the latest Léger North American tracker, the Liberals held their lead in voting intentions with 35 per cent—on par with the past months’ average. However, the Conservatives stood at only 28 per cent nationally, merely five points ahead of the NDP.

While I am not one to overreact to a single poll, this result from one of the top polling firms in the country must be worrying for the CPC, especially considering the heat Trudeau was under for the faltering start of the vaccine rollout in February. Also, as a rule of thumb in Canadian federal politics, when the NDP polls significantly higher than its historic floor of 14 to 16 per cent, it usually means that the Liberals are in trouble. Not this time, according to Léger.

Second: Fresh federal numbers were released yesterday by Abacus Data and, although the horserace data was mostly inline with the averages of the past months, Abacus’ results of federal leaders’ impressions suggest Erin O’Toole’s personal numbers have been souring.

According to Abacus, the Liberals hold a four-point lead nationally over the Conservatives, 34 to 30 per cent. Taken alone, this poll would suggest a statistical tie between the two main parties with a slight edge going to the Liberals (last month, Abacus had the LPC and CPC one point apart), but, taking into account all federal polls conducted since the new year, this survey is consistent with the current trends—with the Liberals holding a national lead ranging from 3 to 8 points (see all federal polls on this page).

As mentioned above, these latest numbers align almost perfectly with the current 338Canada projections and confirm the stability of voting intentions in Canada since last fall (see graph below):

Abacus Data’s regular national surveys have shown impressions of the Prime Minister have remained mostly stable since last September. In this latest poll, 37 per cent of respondents held a positive impression of Justin Trudeau, against 40 per cent with negative impressions. According to Abacus Data CEO David Coletto: “For comparison purposes, in the final days of the 2019 campaign, 38 per cent had a positive view while 45 per cent had a negative view of the Liberal leader.” You will find the complete poll from Abacus Data on this page.

Breaking down these favourability numbers by voting intentions, we see that Trudeau remains on solid footing among LPC voters: 79 per cent hold a favourable view and only 6 per cent hold a negative view of the Liberal leader.

However, Trudeau is viewed favourably by a minority of opposition party voters (note: the sample size of Green and BQ voters being limited, one should be cautious against drawing conclusions based on these subsamples.) Among Conservative voters, only 11 per cent hold a positive impression of Trudeau, while a solid majority, 75 per cent, hold a negative view of the Prime Minister.

As for Jagmeet Singh, the NDP leader holds the highest net favourability rating among federal leaders (+9) with 34 per cent of positive impressions against 25 per cent negative impressions. Singh has similar numbers as Trudeau among voters of his own party, with 81 per cent of NDP voters viewing the leader favourably.

The proportion of Liberal voters who hold a favourable view of Singh is triple those holding a negative impression (39 to 13 per cent). Half of Conservatives voters (49 per cent) view Jagmeet Singh unfavourably.

Most worrying for O’Toole is the results among CPC voters. Unlike Trudeau and Singh who are viewed favourably in similar proportions among their own voters (79 and 81 per cent respectively), only 62 per cent of Conservative voters hold a positive impression of the CPC leader. Additionally, fewer than 10 per cent of voters of other parties view the Conservative leader favourably.

This suggests O’Toole could potentially have a hard time growing the conservative base and converting voters from other parties.

Yet, these numbers from Abacus do not come in a vacuum: In February, the Angus Reid Institute (ARI) also measured dwindling numbers for O’Toole, whose net favourability plummeted seven points since ARI’s previous poll in January, going from minus-15 to minus-22, the lowest score among federal leaders.

The Conservative Party arguably enjoys the most faithful base of voters among federal parties in Canada, with a solid 30 per cent of voters from coast to coast consistently supporting the CPC. In fact, the party has not received a share below 30 per cent in a general election since its very first election in 2004 (with 29.6 per cent). However, while the 30 per cent mark has historically been the CPC’s floor, such poor numbers from the Conservative leader suggest that same mark could also be close to the party’s current ceiling.

With no significant gains in Central Canada and projected losses in B.C. compared to 2019, the Conservatives would be massive underdogs if a federal election were held this week. The most likely outcome would either be a strong Liberal minority or an outright majority.

Adding the latest polls in the 338Canada federal model, we project the Liberals at an average of 163 seats, just below the 170-threshold for a majority at the House of Commons.

The Conservatives win an average of 112 seats, well within range of their 2019-result of 121 seats, but significantly below where the CPC needs to be to win at least a plurality in Ottawa. Even though the national race appears within range in the popular vote, the seat projection is skewed by the fact that Conservatives are still trailing the Liberals by an average of 8 points in Ontario, and sitting as a distant third in Quebec, behind the Liberals and the Bloc Québécois.

As mentioned above, available data suggests the Liberal would be heavy favourites to win at least a minority with current levels of support: the party wins the most seats in 92 per cent of all simulations performed by the 338Canada model:

Naturally, a turbulent spring and a historic budget coming up in the next few weeks could potentially flip this projection significantly, especially if the vaccine rollout should his another snag this spring.

With growing chatter about a possible late-spring election, the up-coming CPC 2021 Policy Convention (scheduled March 18-20, 2021) may be the last chance O’Toole has to fully grasp hold of his own party and improve his personal numbers before the next federal campaign kicks off.

For details on this federal projection, visit the 338Canada page. Find your home riding in this list or use the regional links below: