7 things I learned from the Duffy diaries

Senior writer Jonathon Gatehouse has just emerged from a close reading of Mike Duffy’s private journals. In its pages — redactions and all — he found Canadian politics as you’ve never seen it before. The full story is in our latest issue — available tonight for tablet and mobile readers on Next Issue, Apple Newsstand and Google Play. Watch for it on macleans.ca later this week. Here’s Gatehouse with a preview:

No one knows how long Mike Duffy has been keeping a diary. Since he was a teenage disc jockey and host of a television dance show in Charlottetown? Did he start once he moved to Ottawa in 1972, to cover Parliament Hill for the CHUM radio group? Or could it have been during his ’80s salad days at the CBC, where “Old Duff” was a fixture on The National, and one of the country’s best-known journalists? 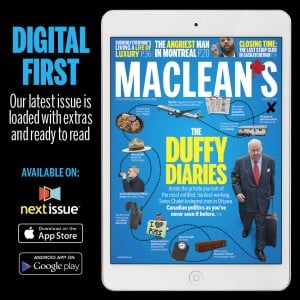 It’s clear the practice didn’t start Jan. 1, 2009, three weeks before he was officially sworn in as senator for Prince Edward Island. His style and shorthand are already well-established: references to himself in the third person—MD—and PMSH for Stephen Harper, curt mentions of the day’s major news story, nuggets of gossip squirrelled away for future use.

The four years’ worth of daily agendas that have been entered into evidence in the suspended senator’s trial on 31 counts of fraud, breach of trust and bribery are obsessive and disciplined, tracking both the mundane details and momentous occasions in his daily life.

Related reading: King of the Hill

The prosecution have been using the electronic agendas as a road map, matching up entries with his travel and expense claims to try to demonstrate that taxpayer dollars were used to pay for partisan purposes and personal activities. In this week’s Maclean’s, I examine the bigger picture, delving into Duffy’s attempts to become an Ottawa player by manipulating the media, managing the government’s response to stories, and using his connections to insert himself into all kinds of debates. But the 232 pages of detailed diary entries tell a number of other odd tales.

Here’s a selection of things I’ve learned about Mike Duffy:

The senator seems to relish the occasions when he can fit in an evening at a club. “LIVE JAZZ” is the all-cap notation about a planned dinner date in Florida in January 2010. There are several appreciative mentions of big bands, combos and piano bars. In February 2011, he reminds himself of a conversation with a fellow senator, and jazz pianist Tommy Banks, about a new Frank Sinatra biography.

He’s no good at vacations.

Each winter, Duffy and his wife, Heather, make a trip to Florida, and take a cruise of the Caribbean. The entries about the senator’s shipboard life make it clear he finds downtime a struggle. “All day at sea. MD could not get cell service, others could,” reads a peevish entry on Dec 22, 2009. A January 2012 cruise is a mix of notes about the weather—“St. Martin, sunny & hot, 85 F,”—and Ottawa-related tasks: “Write Ken Boosenkool re: BC Liberals.” It doesn’t sound like a lot of fun: “Leave St. Kitts, some people missing, watch The Monkees documentary.”

Duffy is befuddled by technology.

Pity the poor Senate IT staff who are forever resetting Mike Duffy’s phone and passwords, or reinstalling software on his computers. And spare a thought for the horde of technicians dispatched to his home and cottage to fix his never-quite-right television and Internet service. The 69-year-old Duffy, like many of his vintage, seems to be deeply confused by the gadgets and doodads that have proliferated in modern life. His entry on Oct. 1, 2012, “Tried and failed to install Windows on Mac Air,” pretty much says it all.

Duffy seems to have something of a fixation on the Nova Scotia-born country musician and producer, who was once married to Emmylou Harris. In October 2010, he notes plans to nominate him for an Order of Canada, and involve Anne Murray, (Ahern has produced 12 of her albums) in the same. In the summer of 2012, Duffy takes it upon himself to arrange a gig for Ahern at Charlottetown’s Confederation Centre, twice discussing it with the theatre’s CEO, and making sure the musician had a ride to the gig.

His health is fragile.

The senator’s history of heart troubles is well-known, and he frequently refers to them as the reason why he continued to maintain an OHIP card while supposedly having his primary residence in P.E.I. But his diaries also point to a number of other health problems, including diabetes and a cancer scare. During his cross-country travels for the Conservative Party, Duffy was often forced to seek medical attention for colds, the flu and respiratory ailments. And he regularly visits a chiropractor for his bad back.

He complains about the service.

Whenever the senator encounters poor service, he takes note, and usually follows up to make his displeasure known. “Thrifty car rental= hassle over cost of second driver,” he notes on Jan. 9, 2009. “Dinner at New Glasgow Lobster supper . . . rude wait for table,” he writes on July 11, 2012. And when his birthday dinner at the Shelbourne Hotel in Dublin was marred by an indifferent waiter in May 2012, Mike took it right to the top. “Apologies for poor service from Manager, etc. MD to write letter.”

Duffy would do anything to help out his party.

As a Conservative star, the senator was dispatched far and wide to raise funds, stump for candidates and promote the party’s agenda. And his diaries make it sound like hard work. The best illustration of this less-than-glamorous side of Canadian politics might be a couple of days he spent campaigning for the Tories during a 2009 by-election in Nova Scotia. After a stop in P.E.I. for a party fundraiser, he drove to Amherst, N.S., to meet with the mayor, then do a local radio interview. “Knights of Pythias turkey supper, welcome spectators at Amherst Rambler game, attend event with Peter MacKay at Amherst elxn HQ,” is the next entry. After a night at a Super 8 motel, he visited a Lion’s Club craft fair and had lunch with election volunteers. Then he drove to Halifax and flew home to Ottawa.