A campaign full of seniors’ moments

Federal parties are chasing seniors with expensive promises. But one 85-year-old and her neighbours devised a cheap way to age well at home. 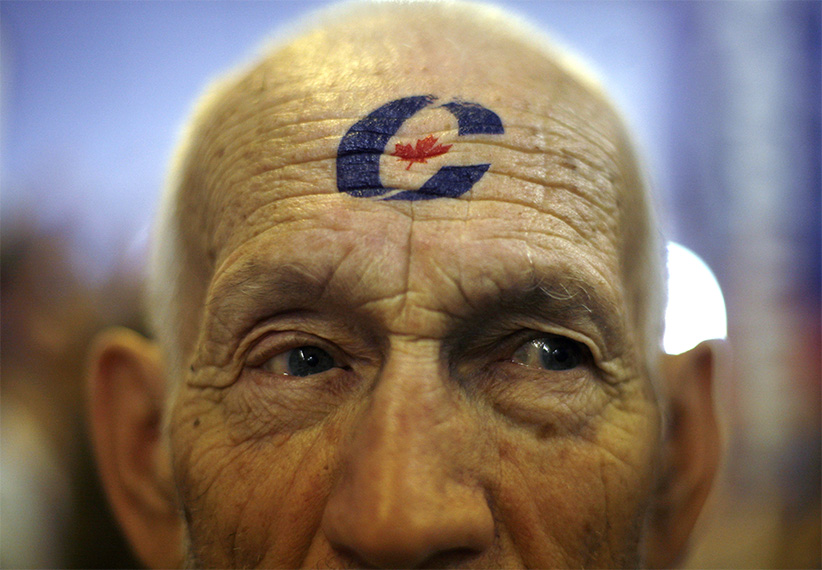 Every election, senior citizens show up at the polls in greater numbers than any other demographic in the country. Eighty-two per cent of Canadians aged 65 to 74 voted in the last election, compared to 50 per cent of 18- to 24-year-olds, the age group with the lowest turnout in 2011. Even seniors over 74 out-vote most Canadians.

Given these voting habits, the concerns of senior citizens—and those of Boomers, some of whom are already retired—are increasingly important issues for politicians to address during this campaign election. Dozens of advocacy groups, led by the Canadian Medical Association, are urging the federal parties to signal their commitment to create a national seniors’ strategy—a formal action plan to deal with the gargantuan fiscal, social and health care crisis looming for Canada as more of the population ages. Over the last week, the federal parties have begun heeding those calls to action.

On Monday, Justin Trudeau promised that the Liberals, within three months of being elected, would boost the Canada Pension Plan to improve income security for seniors, and would build affordable housing. One day earlier, NDP Leader Tom Mulcair committed $1.8 billion over four years to the provinces to improve access to home care, palliative services and nursing beds. And last week, Elizabeth May unveiled the Green party’s proposals to expand CPP and create a “guaranteed livable income” to supplement pensions, as well as a national housing plan. Many of these campaign pledges are meant to distinguish the opposition leaders from the Conservatives and Stephen Harper, who on Tuesday announced plans to introduce a $2,000 tax credit for single and widowed seniors.

This has quickly turned into an election campaign full of seniors’ moments. Tackling the emerging crisis couldn’t be more topical. Last week, Canada ranked fifth out of 93 countries in an analysis of the best places to grow old, down from fourth last year. That score might suggest that Canada doesn’t have much work to do compared to other nations. But maintaining that high ranking—much less improving it—will become more difficult over time, say experts.

Seniors are the fastest-growing demographic in Canada. Today, they represent less than 15 per cent of the population, but account for more than 45 per cent of the country’s health care costs. In 20 years, a quarter of the population will be elderly, and seniors will use up to 62 per cent of Canada’s health care budget.
A few weeks ago, just as the election campaign was getting under way, the Canadian Medical Association and the Canadian Nurses Association, with the support of 33 other organizations, released a report proposing a policy framework for a national seniors’ strategy. It focuses on establishing a system of income security for the elderly, increasing geriatric and palliative training and services, boosting the availability of home care, as well as improving funding for long-term-care homes.

That’s all good election fodder, but perhaps no one can articulate the concerns about being old—and getting older—better than those living it. Christine McMillan is 85 and lives at the Bowling Green II residence in Kingston, Ont. It is one of the rare “naturally occurring retirement communities” across North America. In 2008, the 60-unit apartment building just happened to be almost entirely inhabited by old people, many of them lonely, alone and afraid for their future.
Since then, McMillan has led the residents of Bowling Green II in gathering funding from their community, and groups such as the United Way, to create a network of support and services that tend to their specific needs as seniors. The idea is to bridge the gap for seniors between living independently without the need for help—to cook and clean, bathe and do laundry, get around and socialize—and long-term care, where all their needs are met by staff. The result of McMillan’s efforts is known as the Oasis program.

The residents pay their rent and utilities, as always, but now they get meals catered to them by volunteers or cooking students from a local school. They also hired a personal care worker to assist them daily with any manner of tasks. The landlord helped to turn the building’s basement into a seniors’ lounge, where the residents gather every day to play cards or exercise using the Wii.

These seniors are running “a retirement home with no adult supervision,” says Tai Huynh, creative director of OpenLab, a centre for innovation at the University Health Network in Toronto, which studies innovative methods of health care delivery.

Oasis has proven a success for the residents of Bowling Green II; many who used to be on the wait list to get into a long-term-care facility have since removed their names. It’s also a fiscal success: Oasis runs on $130,000 a year, or $6 a day, compared to $145 per day that seniors at long-term-care facilities often pay.
While the program faces its own challenges in sustaining funding, McMillan believes Oasis is the kind of solution that politicians should consider when they talk about implementing a seniors’ strategy. “It falls into the current trend for private-public partnership. It can be initiated in any apartment building that has an accessible entrance and elevators,” she says. “And it is economical to establish.”

To Huynh, who used to be a director of policy at the ministry of health and long-term care in Ontario, Oasis is a social experiment worth replicating, since the concerns of seniors such as McMillan will only become more prevalent as Boomers age. “We are going to see these issues amplified multiple times over the next 20 years,” he says.

In this way, Bowling Green II is a window into the future, a rare microcosm of what it could mean to age well in Canada. Federal leaders would benefit from knocking on McMillan’s door.