A century of voting rights, and unfinished business

A commemorative loonie reminds us the battle for gender equality continues 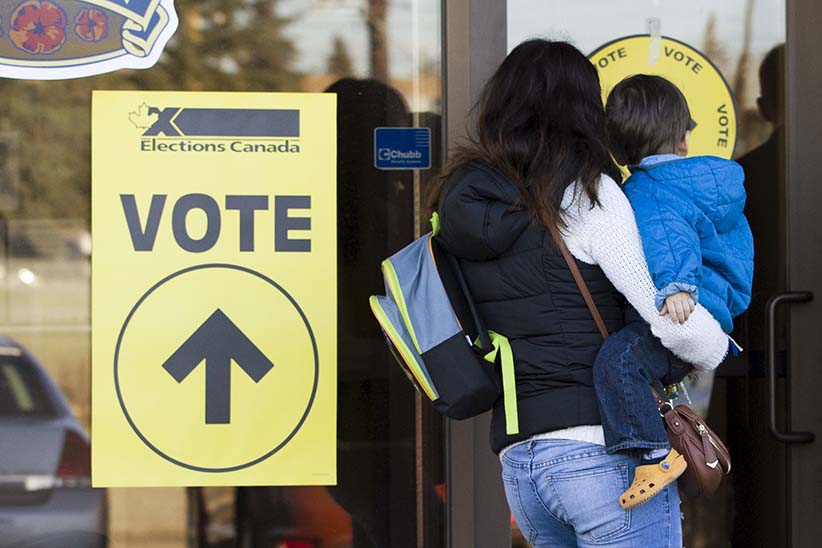 A woman holding a baby enters a polling station to vote in Calgary, Alberta, October 19, 2015. Canadians go to the polls for a federal election on Monday. (Mark Blinch/Reuters)

The Royal Canadian Mint is marking a century since the first Canadian women got the right to vote with a move that could also serve as a reminder their work isn’t done: issuing a commemorative loonie.

The choice of coin is ironic given the wage gap in Canada, since women still aren’t earning a full dollar for every one their male counterparts make.

The mint will release the special loonie in 2016 to commemorate 100 years since women in B.C., Alberta, Saskatchewan and Manitoba were given the right to vote, according to an Order-in-Council posted Dec. 11. But 100 years after the first women were grudgingly allowed their right as citizens, Canadian women make 82 cents for every dollar made by Canadian men. That’s not accounted for by simple differences in education or sector, by the way: Canadian women earn half of all university degrees and meet or exceed the percentage of men working as doctors, dentists and health professionals, as well as those in financial services (though women are still only one-third of university graduates in the science, technology, engineering and math fields).

The voting rights were as gradual a process as the slowly shrinking wage gap: it was only women in the four western provinces who could cast ballots in 1916, followed the next year by Ontario. Women across the Atlantic could vote as of 1925, with Quebec dragging its feet until 1940 and the Northwest Territories moving glacially until granting voting rights to women in 1951.

Federally, it’s clear the First World War had a major impact on the decision to allow women to cast ballots: nurses and women in the Canadian Forces were given the right in 1917, as well as women with husbands, fathers or sons serving overseas, and finally, in 1919, all women over 21 (men had the same age restriction at the time). It’s worth noting that Inuit and First Nations women didn’t have the right to vote until later, since the Inuit only got the right to vote in 1948, and until 1960 First Nations people had to give up their treaty rights in order to cast ballots.

The women’s suffrage coin will depict a 1916-era woman and child, according to the Dec. 11 Order-in-Council, with “the woman proudly casting a ballot while the child looks on,” according to the description. It will also feature the inscription “women’s right to vote” in all caps.

It’s possible the Mint is aware of the wage gap and using the coin as a reminder of continuing inequality. But probably not. “We routinely vary our choice of denominations when designing new commemorative circulation coins,” spokesman Alex Reeves wrote in an email. “The design commemorating the centennial of the right of women to vote in Canada is better suited to the larger size the dollar coin provides, rather than a 25-cent coin, which is smaller.”

The Mint believes the 1916 milestone “was an early step in the path to equality and women’s rights,” according to the rationale for creating the coin. A path that still hasn’t reached its destination.