A closer look at the record-breaking 2015 federal election

The results of the 2015 election were remarkable in more ways than one, setting records in almost every region of the country 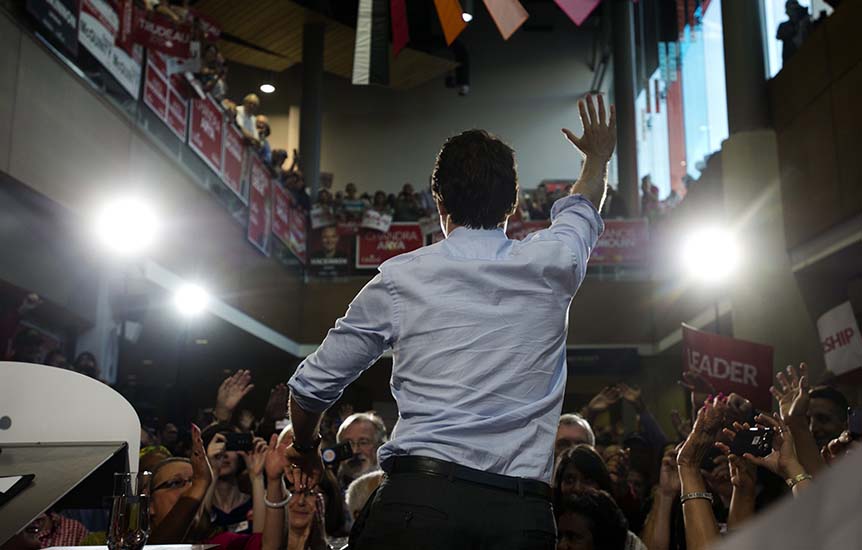 Liberal Leader Justin Trudeau waves to supporters as he takes the stage during a campaign stop in Orleans, Ont., on Monday, September 21, 2015. (Adrian Wyld/CP)

Justin Trudeau and Arthur Meighen have at least one thing in common. Not since Meighen became prime minister (for a second time), back in 1925, had the leader of a third-place party won an election—until Monday.

Perhaps Justin Trudeau’s opponents just weren’t ready for such an unprecedented come-from-behind victory. For only the third time since the Second World War, a majority government was unseated by another majority government. (Brian Mulroney won a majority over John Turner in the 1984 federal election. After he ceded power to Kim Campbell, the Tories fell to a Liberal majority under Jean Chrétien in 1993.)

Trudeau spent 11 weeks flying across the country, and his final few rallies were calculated, not to mention effective. On the last two campaign days, Trudeau blitzed Halifax, Saint John, N.B., Thunder Bay, Ont., Winnipeg, Edmonton, Calgary, Surrey, B.C., and North Vancouver for late-campaign events. It was worth the trip. He won the riding everywhere he held rallies. And, for the first time since 1968, Calgary elected a Liberal MP. (For good measure, they actually elected two.)

After 10 years under Stephen Harper, many voters were talking about strategic voting—ABC, Anybody But Conservative—to oust the Prime Minister. Despite concerns about vote-splitting the left, the Grits had no trouble ousting the right.

So this is the first Liberal majority in an election with a united conservative party since 1980.

And how rare was the East Coast sweep, with the Liberals grabbing all 32 ridings east of Quebec? Even when Chrétien soared to a Liberal majority in 1993, the Grits didn’t sweep Atlantic Canada. Kim Campbell’s PC party was nearly shut out, dropping from 156 seats to only two, but even then, one of the Conservative wins was in New Brunswick.

Much of the Liberal gains came at the expense of the NDP, which fell from being the official Opposition, with more than 100 seats in 2011, to third-party status. While this was considered an orange crash for the NDP, its 44 seats won in the 2015 election is still the second-best result in the party’s history.

The NDP even had its first breakthrough in Saskatchewan since the 2000 election. That being said, hopes were much higher in the Prairies—especially considering the NDP won a majority government in the Alberta legislature earlier this year. NDP Premier Rachel Notley now has a larger caucus than does Mulcair.

Not only will the House of Commons get a redesign to accommodate the 338 elected MPs, 30 more than in the last government, it will also have a new look—besides the sea of red. A record 88 female MPs were elected on Monday. Three of them are from New Brunswick, which marks the most the province has sent to Ottawa since 1997. But before anyone talks about breaking any glass ceilings in Parliament, female representation is still a paltry 26 per cent, which is only one per cent higher than in the 2011 election.

First Nations, however, did indeed “rock the Indigenous vote,” as many hoped. There will be a record 10 Indigenous MPs in Parliament (eight Liberal, two NDP), compared to three from the 2011 election. And in the 51 swing ridings identified by the Assembly of First Nations, the Liberals gained 17 seats.

In fact, not since the Toronto Blue Jays’ last trip to the playoffs have voting numbers been this high. Including the record 3.6 million Canadians who voted in advance polls, 68.5 per cent of eligible voters cast ballots, a turnout not seen since 1993.

As for the Conservatives, their official Opposition status will include 99 MPs—a number that also belonged to one of Harper’s biggest supporters.