UPDATED AGAIN: A constitutional crisis? On the Friday before a long weekend?

Sadly, as the ever-vigilant Colleague Potter points out, that’s one way to describe the current dispute between our prime minister and our governor general over whether or not the latter can style herself as Canada’s head of state.

According to PMO — and at least a few constitutional lawyers — she cannot; that title belongs to Her Majesty Queen Elizabeth, and Her Majesty alone.

Apparently, it all goes back to King George VI, who, in 1947, “”transferred all the duties of head of state of Canada to the Governor General,” although presumably, that could be revoked by a future monarch, although as far as ITQ knows, that hasn’t happened.

Meanwhile, last night, the GG’s official website appears to have undergone a major redesign; visitors are now greeted by an enormous photo of Michaelle Jean representing Canada at the United Nations. Unfortunately, none of the links seem to be working at the moment, and the site itself is painfully slow to load, but ITQ will keep clicking away — and will report back once she’s able to peruse the rest of the site.

UPDATE: The site seems to be back online, enormous splash screen photo and all. Under the heading “Represent Canada,” the governor general is described as “representative of the Crown and head of State.” It also helpfully provides a link to the aforementioned letters patent from King George in the explanation of her “role and responsibilities”:

Since Confederation in 1867, Canada has been a constitutional monarchy and a parliamentary democracy. Her Majesty Queen Elizabeth II is the sovereign and Canada’s head of State. 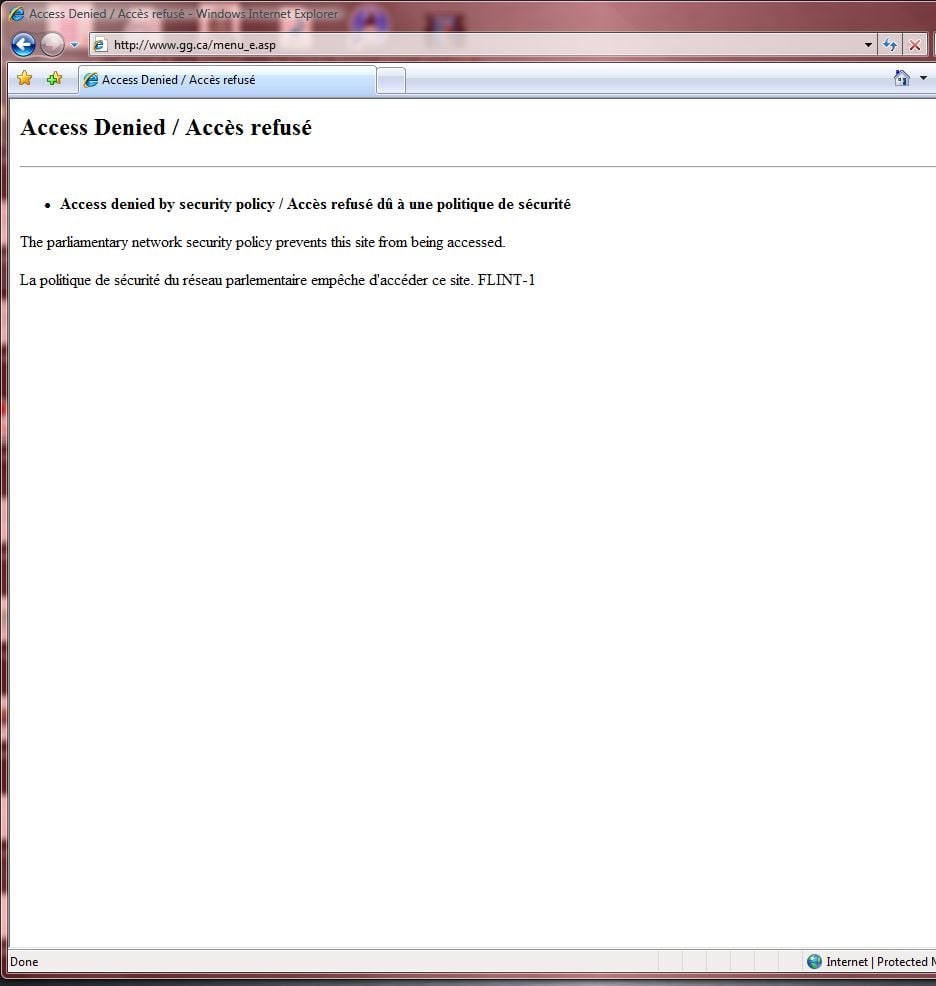 Just an overzealous autotriggered filtering protocol? At the very least, it suggests that the site itself has been transferred to a new server — perhaps to prevent PCO from getting their hands on it?

IT’S OFFICIAL: Colleague Potter posts the latest release from Rideau Hall announcing the relaunch, which has, we’re told, been in the works for “months”; there is no mention of the contretemps over her official status, as far as state-heading.

FILED UNDER: don't mess with a woman who eats her seal heart raw Michaëlle Jean so whose side will the monarchists be on? Stephen Harper where are all those constitutional lawyers when you need one?