Trudeau earned international praise for his tweet. But at an emergency debate, demands for concrete action went ignored. 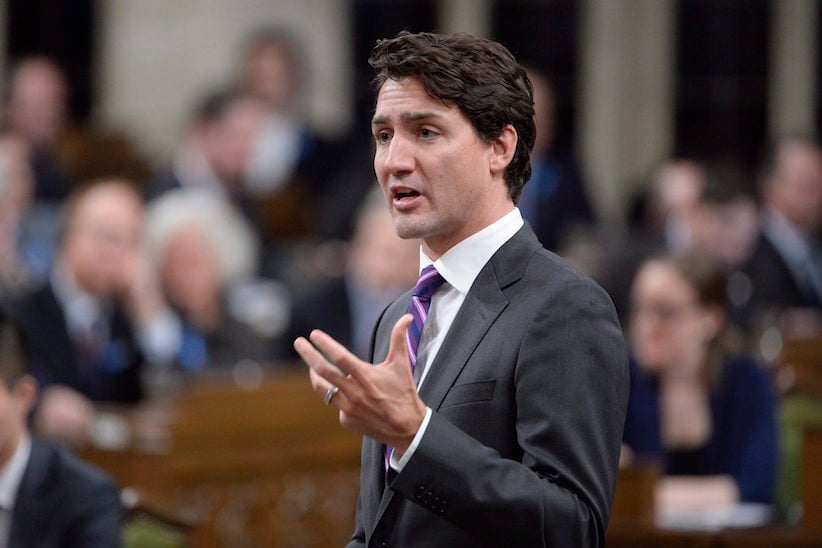 That widely reported tweet from Justin Trudeau—the one in which the Prime Minister declared Canada’s commitment to diversity, after U.S. President Donald Trump closed America’s doors to travellers from seven mostly Muslim countries—was turned against him in a special parliamentary debate.

On Jan. 28, as outrage spread over Trump’s executive order temporarily blocking entry to the U.S. for citizens of the seven listed countries, Trudeau made international news by tweeting: “To those fleeing persecution, terror and war, Canadians will welcome you, regardless of your faith. Diversity is our strength.”

He basked in international praise. But in an emergency debate on Trump’s controversial move held in the House on Tuesday evening, the question of whether Trudeau’s social-media salvo was meaningful sparked bitter exchanges. Vancouver MP Jenny Kwan, the NDP’s immigration critic, who requested the debate, said the tweet needed to be followed up by concrete measures from the Liberal government.

“When Canadians heard these words, we could not help but to feel a sense of pride, for they reaffirm our Canadian values,” Kwan said. “And now, it’s time for us to give meaning to these words with an action plan.” Indeed, Kwan proposed a detailed Canadian response, including fast-tracking refugees who have already been screened for settlement in the U.S., but were stopped by Trump’s ban, to come to Canada instead.

MORE: What you need to know about Trump’s refugee ban

The initial reaction from the Liberal benches during the debate, however, was merely to repeat Trudeau’s tweet, and tout the attitude behind it. Winnipeg MP Kevin Lamoureux, who rose to give the first response to Kwan’s speech, recited Trudeau’s tweet again in its entirety.

Lamoureux then called the Prime Minister “a man of great tolerance and understanding of what real Canadian values are,” adding that Trudeau’s cabinet reflects these same strengths, and closed by asking Kwan if she didn’t agree that the Liberal government was “advancing the values that Canadians hold so close to their hearts.” Kwan simply said, “No.”

Then NDP Leader Tom Mulcair rose to take aim, expressing incredulity that Lamoureux “stood to justify the inaction of the Liberals by reading a tweet from the Prime Minister.” Mulcair went on: “Is that our foreign policy? Is that what Canada’s standing up for human rights on the world stage boils down to in this era with this government?”

References to Trudeau’s tweet continued on and off as the debate continued. The emphasis was a reminder that Trudeau’s social-media reach and mainstream media persona allow him—and his government—to be heard even when Canada isn’t close to the core of a big story. However, his ability to attract notice is bound to turn, at least sometimes, into demands that he offer substance.

In the angry aftermath of Trump’s travel ban, Trudeau and his newly appointed immigration minister, rookie Toronto MP Ahmed Hussen, have been careful to boast about Ottawa’s policies, rather than directly criticizing the White House. Trudeau sounded far less forthright on the issue than, for instance, German Chancellor Angela Merkel, who bluntly denounced Trump’s policy.

And that’s notable, since Trudeau and Merkel were often mentioned in the same breath last fall, after Trump’s election and the Brexit vote in Britain, as the most prominent national leaders left standing to defend the liberal international order in the face of rising, inward-turning right-leaning populism.

MORE: How Trudeau’s cabinet and Trump’s team stack up

Since then, Trudeau has clearly adopted a strategy of trying not to antagonize the Trump administration. As the travel ban uproar shows, that approach has its downside. This won’t be the last Trump-driven controversy on which Trudeau will be asked not only to use stronger words, but to take real measures to push back.

In this case, the NDP proposed three: offering a home in Canada for those stranded refugees who had been bound for the U.S.; lifting the cap on one category of privately sponsored refugees allowed into Canada his year; and suspending a Canada-U.S. agreement by effectively declaring that Canada no longer views America as a reliably safe haven for people fleeing persecution abroad.

MORE: Why Canada has plenty to fear from Trump

Of course, taking any of these steps would risk riling the unpredictable new boss of Canada’s biggest trading partner. Trudeau must take seriously the need to manage the relationship between Ottawa and Washington, and many Canadians will understand the imperative to be diplomatic. Many others, though, are bound to crave more in the weeks and months ahead—especially from the Prime Minister they admire as a sort of anti-Trump—than the occasional upbeat tweet.

Trudeau will be tested to find a way to keep the peace with Trump, while maintaining his bond with voters who, after all, didn’t elect him for his pragmatism.