With Maclean's debate coming Aug. 6, here's a look at how a misplaced prop or a perfect one-liner in a debate can affect fortunes—for better or worse 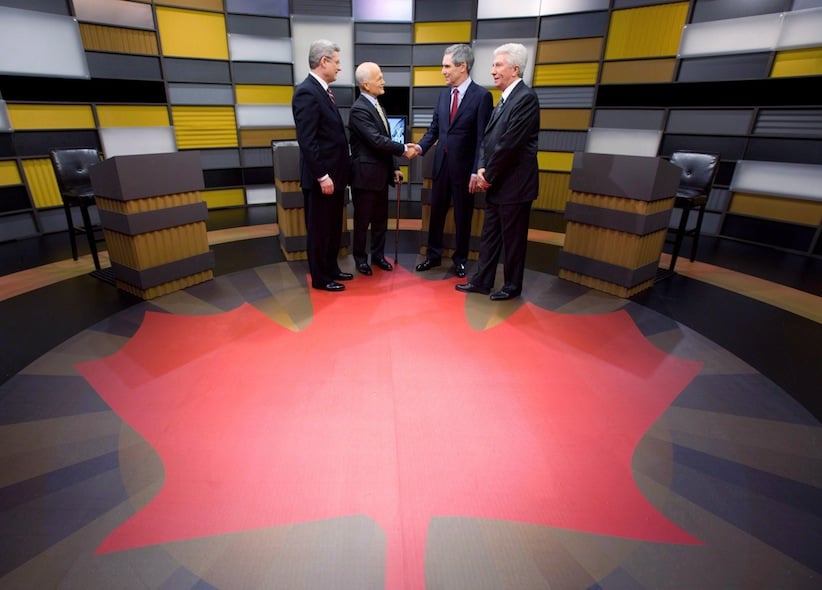 Live television holds nearly inﬁnite possibilities. Beyond the ideas and promises, not to mention the hundreds of candidates who actually contest each of more than 300 separate ridings, politics in this country is dominated by the clash of four or ﬁve human beings.

Related: How to watch and engage with the Maclean’s debate

Such is the allure of the federal leaders debates. First televised in 1968, the debates have produced great (and less-than-great) moments of political history.

In June 1984, John Turner succeeded Pierre Trudeau as Liberal leader and prime minister and, in July, he called an election. For a ﬂeeting moment, it looked as if the Liberals, revived by the replacement of Trudeau, might retain power. But then came the night of the English-language leaders debate. Taking issue with comments made by Brian Mulroney, Turner attempted to challenge the Progressive Conservative leader on the issue of patronage, but Mulroney easily turned the attack back, condemning the dozens of appointments that were made around the time of Trudeau’s exit and calling on Turner to apologize. “Well, I’ve told you and told the Canadian people, Mr. Mulroney, that I had no option,” Turner said. The moderator attempted to move to the next question, but Mulroney pounced. “You had an option, sir. You could have said, ‘I am not going to do it,’ ” he said, jabbing his ﬁnger at Turner. The blow was momentous. “This single exchange shoved the Liberals’ shaky support into free fall, as swing voters, along with many who had been loyal to the Liberals for generations, abandoned the party of Trudeau and Pearson overnight,” John Duffy recounted in Fights of Our Lives. This is the fabled knockout punch, the dramatic possibility held by every debate, even if rarely realized.

The situation facing John Turner ahead of the 1988 debates was dire. “The Liberal Party of Canada was staring death in the face on his watch,” Duffy writes, “creating the possibility that Turner would go down in Canadian history as the all-time worst leader of a major national party.” There was discussion within the party of an unprecedented move to replace Turner as leader in the middle of the campaign. So Turner came to the primetime encounters in desperate need of a good showing. Two hours into the English-language debate, he made his move, coming at Brian Mulroney—quite literally stepping toward him, at one point—on free trade with the United States. The resulting clash, including each man invoking his respective parents, was riveting and a win for Turner, propelling the Liberals to a lead in the polls. Although the PCs recovered and Mulroney ultimately held onto power, the Liberals doubled their seat count and staved off disaster.

Related: Why the Maclean’s debate matters

Though perhaps not as well-remembered as the WaveRunner Stockwell Day rode to a news conference, or Rick Mercer’s mocking petition to have the Canadian Alliance leader renamed Doris, there was also Day’s use of a prop during the 2000 debate. Facing accusations that his party would allow for a system of private health care, Day held up a small, crudely drawn sign that read, “No 2-Tier Health Care.” A report from the night of the debate claimed that his advisers audibly groaned. “More and more, I think he must be running for ofﬁce as some kind of game-show host,” Progressive Conservative leader Joe Clark mocked, “not as the prime minister of the country.” The Canadian Alliance won just 66 seats. A year later, Day was out.

Liberal leader Michael Ignatieff wanted to lecture Stephen Harper about the nature of democracy. But, near the end of a round on how the parties would handle Parliament, Jack Layton turned on Ignatieff. “I have to pick up on something Mr. Ignatieff said,” the NDP leader interjected. “He said before [that] we have to walk the walk, and we have to be a strong leader and respect Parliament. I’ve got to ask you, then: Why do you have the worst attendance record in the House of Commons of any member of Parliament?” Ignatieff smiled awkwardly. Layton proceeded to deliver the coup de grâce: “You know, most Canadians, if they don’t show up for work, they don’t get a promotion.” Ignatieff could have tried to explain that he had a policy of not voting on some private members’ bills, or that he’d been away from Ottawa so he could tour the country and meet with Canadians—explanations he would later attempt—but instead, he merely protested, imperiously, that he would take no lessons on respect for democracy from Layton. That exchange wasn’t the sole driver of what next happened to their two parties—the NDP surging, the Liberals crumbling—but it helped.