What the Conservative race needs now is... John Baird? 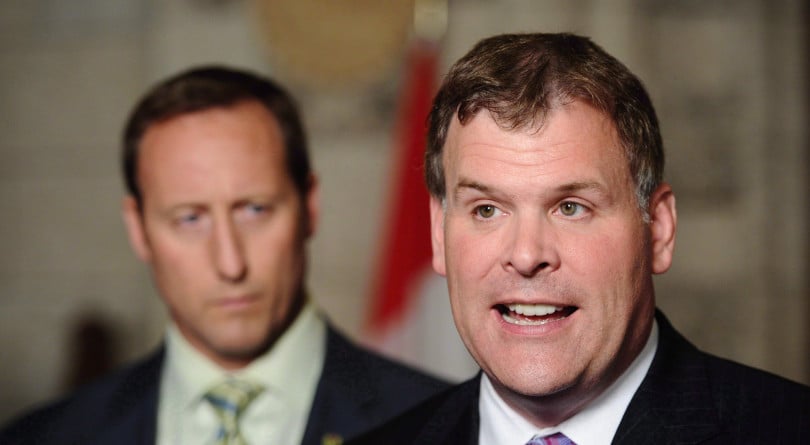 Then-Minister of Foreign Affairs John Baird (right) and then-Minister of Defence Peter MacKay speak to reporters in the foyer of the House of Commons in Ottawa on June 22, 2011. (Sean Kilpatrick/CP)

Could John Baird make a run for the Conservative leadership? Jason Lietaer, a longtime Parliament Hill and Queen’s Park insider in Tory circles,  told CBC News that “a lot of people think that [Baird] would be a game-changer in the race.” And there’s another potential candidate to add to the race’s Wikipedia page: John Williamson, a New Brunswick MP who once headed up the Canadian Taxpayers Federation and served a stint in Stephen Harper‘s PMO, says he’s testing the waters.

Jenni Byrne, a former Conservative national campaign director who was also Harper’s deputy chief of staff and Doug Ford‘s principal secretary, yesterday tweeted bravely about having been sexually assaulted when she was 18 years old—and telling almost no one for years because she didn’t want it to define her. “I want to be thought of as tough, strong and political,” she wrote. “I didn’t and still don’t want sexually assaulted as part of that.”

Americans can apparently thank Canadians (and Mexicans) for the White House’s occupant-in-chief. At a signing ceremony for the new NAFTA, Donald Trump told those assembled: “This is something we really put our heart into. It is probably the number one reason that I decided to lead this crazy life I’m leading right now, as opposed to that beautiful, simple life of luxury that I lead before this happened.” Later in the day, Deputy PM Chrystia Freeland tabled a bill to ratify the trade deal.

Mexico’s president, Andrés Manuel López Obrador, is hoping to pull off a different sort of trade with Canada. AMLO wants to offload his luxurious presidential jet onto Justin Trudeau, whose own plane, he’s heard, “had problems.” The price tag: $130 million, quite a discount from the $200 million paid by the Mexicans—but good luck spending that much on a taxpayer-funded chariot of the sky. (No deal as of this writing.)

Canada joined the U.S. and EU in slapping sanctions on individuals “involved in the illegitimate elections held in Russian-occupied Crimea” last September. If Trump is ambivalent about Russia-Ukraine tensions, his treasury secretary is anything but. Steven Mnuchin said the new sanctions highlight “the strength of the transatlantic alliance in standing up to Russia’s continued aggression.” [The new sanctions]

The CEO of an energy company that might spend $20 billion on an oil sands mine didn’t sound bullish on his project’s prospects. Don Lindsay, who heads up Teck Resources, told a webcast from a CIBC conference in Banff that it’s “anyone’s guess” what will happen to his company’s Frontier proposal: “We’ll see what the cabinet does.” [The Canadian Press]

Back to basics: The Speaker of the House of Commons unveiled a fancy suggestion box this week. One of Anthony Rota‘s first promises when he sought the job last December was to follow through on fellow MP Dan Albas‘s idea. Speaker spokeswoman Heather Bradley tells Maclean’s the box was originally crafted as a time capsule for former speaker Gilbert Parent, but was repurposed for its new duty. Curious wanderers can find the box in the south corridor on West Block’s second floor.

Canada’s man in China has recently spent time in New York City. The Globe and Mail reported that Dominic Barton, formerly of global management consulting giant McKinsey & Co., “gave a deposition for more than five hours at a boutique law firm in midtown Manhattan.” Barton is caught up in a high-profile legal fight between McKinsey and billionaire Jay Alix.

Barton will be in Ottawa before too long, set to testify at the House special committee on Canada-China relations by Feb. 7 at the latest. That committee meets today and will hear from senior federal officials, including Steve Verheul, Canada’s top NAFTA negotiator (whose responsibilities go well beyond continental trade).

Tonight, Trudeau is in Mississauga. The PM is at a Liberal fundraiser at the Versailles Convention Centre. Presumably, the local MP, a guy by the name of Navdeep Bains who happens to be a senior cabinet minister, will be in the house.