A literally explosive day on Parliament Hill (due to construction)

Politics Insider for July 30: The Prime Minister faces his opposition at the finance committee, the Tories process their ballots and Scott Brison—remember him? 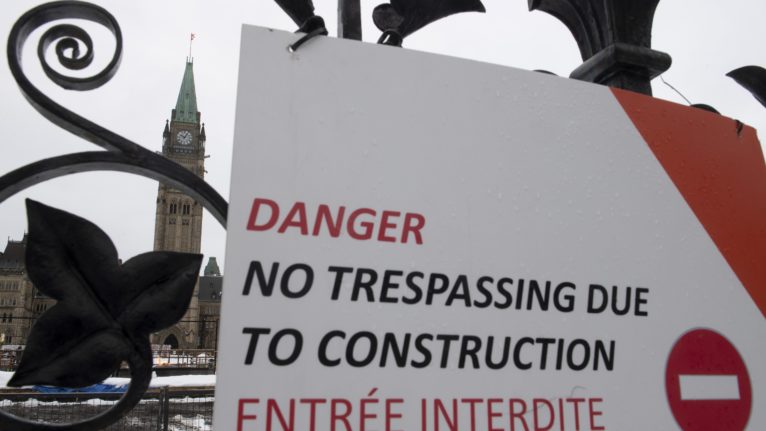 A construction sign hangs on the Queen's Gates on Parliament Hill in Ottawa, Jan. 27, 2020. (Adrian Wyld/CP)

If you’re in and around Parliament Hill today, you’re in for an explosive experience. Seriously. Excavations are underway in preparation for the second phase of the Hill’s subterranean visitors’ welcome centre. Listen for a brief symphony of horns honking before the final act—specifically, three short horn signals will give way to a minute of silence; then another short horn signal will be the final opener for a controlled explosion. Rinse and repeat until sunset.

Within the safe confines of a parliamentary committee meeting, Justin Trudeau will answer questions on the WE scandal. The PM will testify at the Commons finance committee starting at 3 p.m. His chief of staff, Katie Telford, will follow for her own session. Yesterday, the committee met to talk logistics before today’s rendezvous. Opposition MPs passed a motion that demanded Trudeau stick around for three hours. As of early this morning, the exact length of Trudeau’s appearance doesn’t seem to have changed.

The obvious lessons Justin Trudeau keeps failing to learn: Paul Wells and Marie-Danielle Smith, writing in Maclean’s, sketch the organizational structure of a Trudeau government that hatched the ill-fated Canada Student Service Grant. At the heart of the bungled file, they found a Prime Minister and a process and a program caught up in Trudeau’s recurring flaws.

If it were all just a sloppy bit of program design in the midst of unprecedented crisis, the WE mess would be bad enough. What makes it worse is the weary sense of déjà vu it provokes. This doesn’t feel like a random Trudeau screw-up. It feels like a highly characteristic Trudeau screw-up. It’s the sort of thing the Prime Minister does now and then.

Addison Cameron-Huff, a cryptocurrency lawyer in Toronto who knows his way around various corporate registries, dug into the “labyrinth” of organizations—that’s Craig Kielburger’s word—tied to the WE empire. Cameron-Huff found his way to an Internal Revenue Service tax form for the U.S.-based WE Charity, submitted last year, that [scroll to page 8] revealed a $297,570 consulting expense paid last year to 202 Strategies LLC. One of that firm’s tag lines: “Turn crisis into opportunity.”

The Globe and Mail dug into a separate $130,000 expense paid to Firehouse Strategies, a Republican-connected consultancy that has ties to individuals who last year tried to discredit Canadaland, a media outlet that has published critical stories about WE.

How they see us: Jason Leopold, a BuzzFeed News reporter, got his hands on a document meant to prepare then-homeland security secretary John Kelly for meetings with Canadians. The three-page primer on Canucks reminds us what it means to be Canadian: our head of state is the Queen of England (wrong—she’s the Queen of Canada); we all speak English (wrong—13.8 per cent of us don’t); and we keep small talk to a minimum (wrong—our Prime Minister loves to dish about Trump with fellow world leaders).

Economist Armine Yalnizyan told her followers that John Loxley, whom she called the “father of the alternative budget”—the Canadian Centre for Policy Alternatives’ annual exercise in left-leaning fiscal advocacy—has died. Manitoba NDP leader Wab Kinew said Loxley “helped shape my understanding of economics” at the University of Manitoba—where, Kinew says, he met fellow Manitoba pol Matt Wiebe at the back of the class.

Anyone can watch every single step involved in the Conservative party processing leadership ballots. When Maclean’s tuned in, a party operative wearing a Roy Halladay T-shirt was opening “outer” envelopes that contain both “ballot secrecy envelopes” and other required documentation. From there, submitted ballots and documentation are verified in another room. Don’t miss the “escalation area.” Party spokesman Cory Hann explained that some voters might have inadvertently placed all documents—not just their ballots—inside their secrecy envelopes. “Escalated secrecy envelopes” are opened to verify that all documentation was, in fact, provided, even if slightly incorrectly. This, folks, is radical transparency at a devastatingly slow pace.

A Tory leadership debate hosted by the Independent Press Gallery of Canada fell apart yesterday after Leslyn Lewis’s doctor ordered her to stay away and frontrunner Peter MacKay backed out because he would only join a debate that included Lewis. MacKay called for a virtual rescheduling asap.

One man’s accountability law is another man’s lost job opportunity. Jamie Carroll, a former national director of the federal Liberals, wrote an op-ed for National Newswatch that insisted Stephen Harper’s first piece of signature legislation, the Federal Accountability Act, has reduced the labour pool of experienced politicos to the point that the best prospective staffers are barred from working in government. Tory MP Dan Albas politely subtweeted that view with a tidbit of trivia about good people in Ottawa: Scott Brison once gave up his private member’s bill slot so Albas could advance a bill to liberalize wine trade within Canada. Brison took no issue with the compliment.