Politics Insider for Dec. 13: Would it have mattered if the leader wasn't Scheer, what led to his resignation and a look at some potential replacements 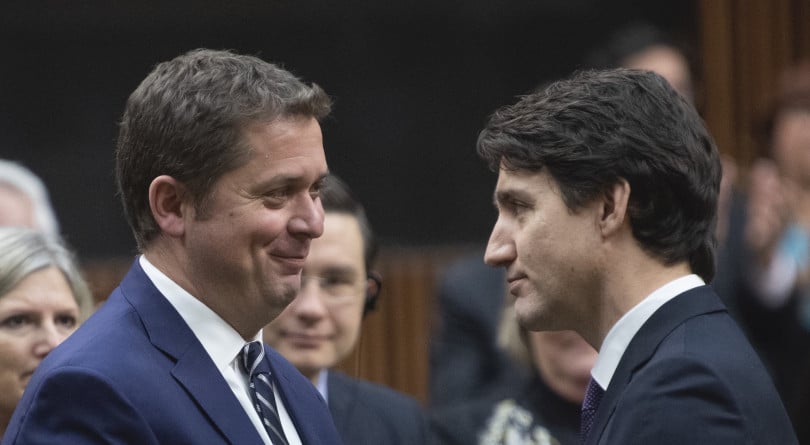 Prime Minister Justin Trudeau shakes hands with Leader of the Opposition Andrew Scheer after he announced he will step down as leader of the Conservatives, Thursday December 12, 2019 in the House of Commons in Ottawa. (Adrian Wyld/CP)

Andrew Scheer’s abrupt departure on Thursday has thrown federal politics back into confusion just one week into the new parliament. We’ve got a lot of ground to cover, so let’s get started.

The Conservatives after Scheer — the revolution eats its own:  The assumption among Scheer’s opponents that the party could obviously do better will now be tested, writes Paul Wells. Best of luck, folks:

Conservatives’ opponents are quite sure every Conservative is the same, but in fact the party is a diverse coalition whose only successful leader, in its current incarnation, has been Stephen Harper. The years since he lost the 2015 election have been eventful. How a new leader can hold and expand the coalition is the party’s central question. The stakes are high and the challenge is daunting.

Forty-seven Conservative MPs are from Alberta and Saskatchewan. If the upcoming leadership campaign hands those MPs’ supporters a Halifax lawyer, will they think the party has pulled a fast one?

Can Toronto consultants and Saskatchewan evangelicals agree on the leader’s proper position on reproductive rights, equal marriage and Indigenous reconciliation? If the faction that ousted Scheer gets its preferred new leader, will the rest of the party stick around? Read more ››

Andrew Scheer steps down amidst questions about his use of party funds: The leader’s resignation was spurred by reports of party money used to pay for his children’s education, writes Stephen Maher:

Scheer’s resignation came a few days after Maclean’s contacted a senior party official to ask whether the party was paying for his children’s school fees. The party’s fund was said to have been picking up the fees but a senior official, speaking off the record, firmly denied the allegations. The official, concerned by the allegations, followed up and learned that the party was, in fact, paying the fees. The revelation led to the resignation, party sources told Global News, which first broke the news.

Sources told the CBC that Scheer’s decision was prompted by a late-night conversation with his eldest son that “left him feeling he didn’t know his son well enough.”

The Conservative Party’s fund is governed by a board of directors, including former prime minister Stephen Harper and longtime key fundraiser Irving Gerstein. They were apparently not aware of the payments until Maclean’s inquired. “This expense was hidden from us at the board. I’m beyond furious about it,” said an official, who was not authorized to speak publicly.  “But we didn’t know about it. We certainly were never asked to approve it which I would not have.” Read more ››

Scheer is out. What happens next will change Canada forever: The next leader will either be someone who resonates with voters across the country or derail the party entirely, writes Scott Gilmore:

With Scheer out, the party has a chance to consider what type of party they want to be. If they pick a social conservative (which is most likely when you consider how strong that contingent is—and that this faction was apparently driving the dissatisfaction with Scheer) then they will keep pulling their steering wheel to the right, off the road, over the curb, and into the ditch.

What Scheer said: Here’s the full text of Scheer’s resignation speech in the House of Commons:

I’ve logged many hours flying back and forth from Regina and Ottawa and all across this wonderful country. And along side my friends in the Conservative caucus we’ve accomplished a lot on both the government and opposition side of the benches. And most importantly we’ve kept our party united and strong. Which is why today I felt it was appropriate to speak to any friends and colleagues in the House of Commons about one of the most difficult decisions I have ever made. I just informed my colleagues in the Conservative caucus that I will be resigning as the leader of the Conservative party of Canada. And I will be asking the Conservative Party National Council to immediately begin the process of organizing a leadership election.

So let’s check in with some of the folks who’ve been put mentioned as contenders to replace Scheer over the past year, though no one has yet put their name in the hat.

There are plenty of other names being closely watched in the weeks ahead, including Erin O’Toole, Lisa Raitt, Caroline Mulroney and Brad Wall, just to name a few, meaning we could see another very crowded debate stage like we did nearly three years ago.

What say you: Help us better understand what you’d like from the Maclean’s Politics Insider newsletter. This short survey will only take a few minutes to complete. We really appreciate the feedback.