A movement of 'radical moderates' takes shape in Halifax

Scott Gilmore began his cross-Canada dinner tour on Monday, regretting a column that sparked the idea and dreading the evening. Then something surprising happened. 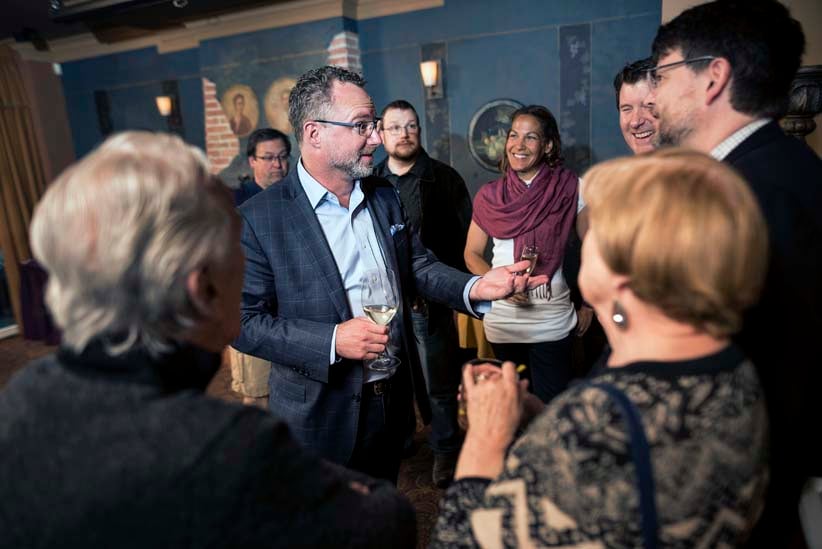 Scott Gilmore leads a discussion before dinner at Cafe Chianti in Halifax, N.S. on Monday, April 24, 2017. (Photograph by Darren Calabrese)

I flew into Halifax on Monday evening dreading the dinner I was about to have with a room full of strangers. I am not one of those types who voluntarily heads out to meet new people, make friends, chat up a room. But I did not have a lot of choice in this case.

I wrote a column a couple weeks ago bemoaning the state of the conservative movement in Canada, and wondered why we couldn’t have a party that believed in limited government, but was also compassionate and welcoming. My column impetuously proposed I would host some dinners to discuss this. To my horror, thousands of readers responded saying that was a great idea. Suddenly a “Cross Canada Dinner Tour” was in the works, taking me from Halifax to Vancouver and back, eight cities in total.

So, tonight I walked down to the Café Chianti just off the waterfront, expecting a painful encounter and cursing myself for not being more careful about what I write. This was going to be a disaster. Strangers? Talking politics? I had a headache before I even opened the door. What actually happened, though, took me completely by surprise. 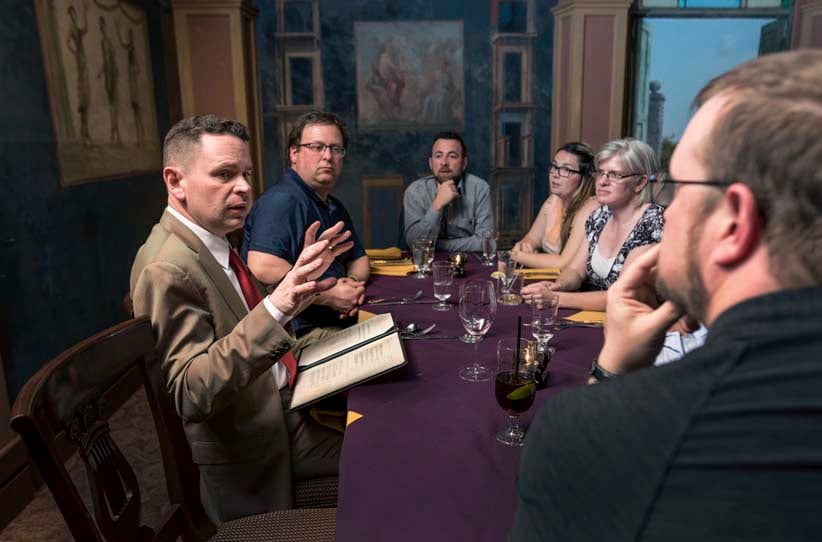 A group of people engaged in discussion before dinner at Cafe Chianti in Halifax, N.S. on Monday, April 24, 2017. (Photograph by Darren Calabrese)

The room was remarkably diverse. There was a young couple who figured this would be a great date, an octogenarian, a former MP, people who had worked on Kim Campbell’s, Joe Clark’s, Brian Mulroney’s, and Stephen Harper’s campaigns, some curious Liberals, more than one who had never been interested in politics before, and many more who had been interested, but had grown disenchanted. There were several trades and professions represented including a furniture maker, a naval officer, a housewife, and an aircraft mechanic. They came from as far as Cape Breton and New Brunswick, too.

RELATED: Confessions of a self-loathing Tory

I had been hoping no one would show, and now that they had I was curious why. So, as the waiters brought dinner, I asked people to explain their reason for coming. One college student said he was tired of being ashamed to say he was a Conservative. An older man told us he was profoundly discouraged by political debate in Canada, and wanted to support a conservative party that was hopeful, not afraid. One lady said she was upset at the lurch towards xenophobia. Another couldn’t believe the party had given up on fact-based policy, especially in regards to climate change. One gentleman explained he was interested in a party that practiced “long-form politics,” that presented policy ideas that made sense for a generation, not just a news cycle. Their reasons were all personal, almost confessional. “I didn’t leave the party, the party left me,” said one man sadly. 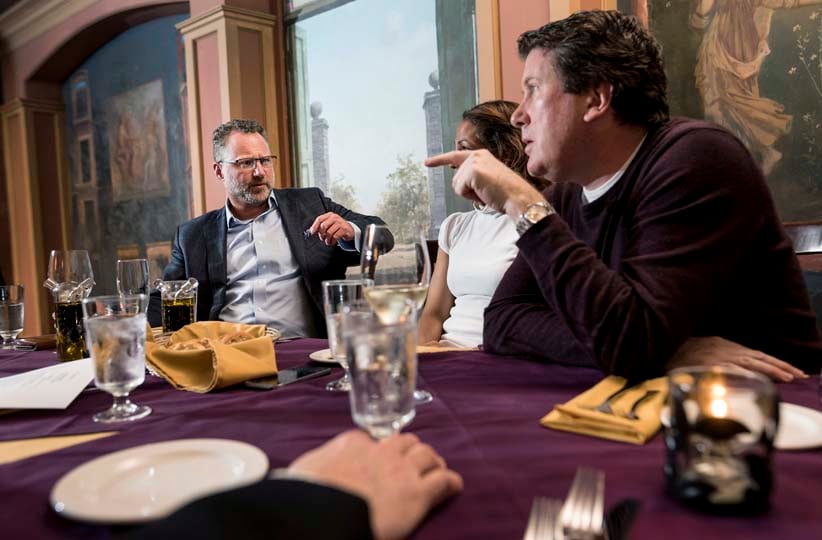 Scott Gilmore, left, during a discussion over dinner at Cafe Chianti in Halifax, N.S. on Monday, April 24, 2017. (Photograph by Darren Calabrese)

What followed, over some excellent gnocchi and a few bottles of wine, was one of the most constructive, engaged, and hopeful political conversations I’ve ever listened to. It is probably not coincidental that I had to leave the capital to hear it. In hindsight, I wish I had recorded it for a podcast—there were some great insights and I filled my paper menu with notes and quotes.

I asked two overarching questions. The first was, “How do you define your conservative values?” Their answers bore little resemblance to the rhetoric in the Conservative leadership race. The first person I asked talked about the need to respect individual liberty, including who you love and what you smoke. Some explained that the objective of “Peace, order, and good government” must be intended for all Canadians. There was talk about the need to balance fiscal restraint with compassion and a recognition that not all Canadians are born into the same circumstances; a lesson they felt had been forgotten by some of the current crop of leaders. This was a theme that kept reemerging all night, the idea that the Conservative party has drifted too far from the centre, that it did not reflect the values of most Canadians, and that there was no reason a more humane and inclusive conservative ideology couldn’t be embraced by people who, right now, would never consider supporting the party. 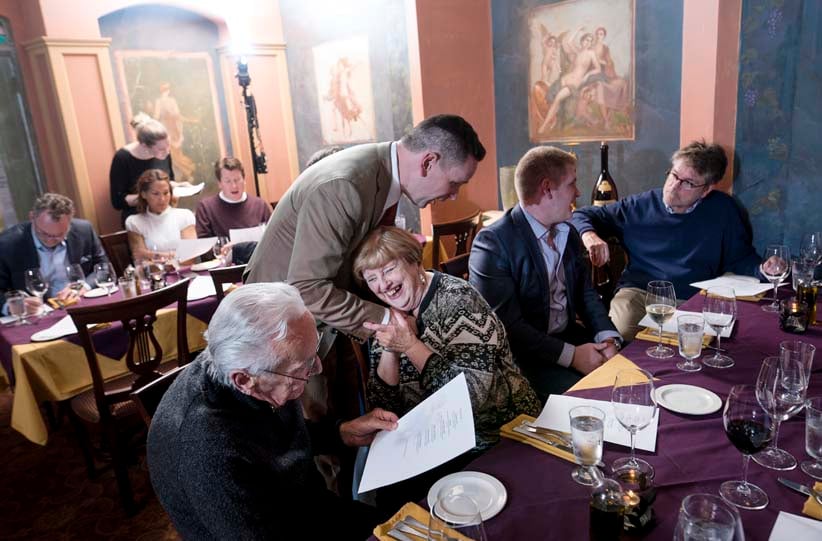 A group of people engaged in discussion during a dinner at Cafe Chianti in Halifax, N.S. on Monday, April 24, 2017. (Photograph by Darren Calabrese)

The second question was, “What advice would you give the new Conservative leader?” A young lady cleared her throat, paused, and then said, “Don’t be a dick.” That may have been the most popular idea of the evening, and it summed up a common feeling that the party has lost its smile, is no longer welcoming, and seems to be against more than it is for. Others talked about the need to focus on the economic anxiety they believe led to Brexit and Trump. Several expressed the desire that the party will widen the debate, and allow a reasonable discussion on gay rights and climate change.

At the end of the night I asked them what they would like to see happen next. There was talk of creating a more formal movement that represented the “radical moderates” of Canada, and of the need to create a new party. But there was also hope that candidates like Mike Chong or Erin O’Toole would prevail in the leadership race. These are conservatives they could support.

On Tuesday I fly to Toronto for the next dinner. More people than we expected signed up and we have moved it into a larger venue, at the Brazen Head Pub on East Liberty Street. If you want to continue this conversation, join us at 7:30 p.m.. This time, I promise you, I am genuinely looking forward to it.