Does Parliament need a national ‘speak no evil’ day? 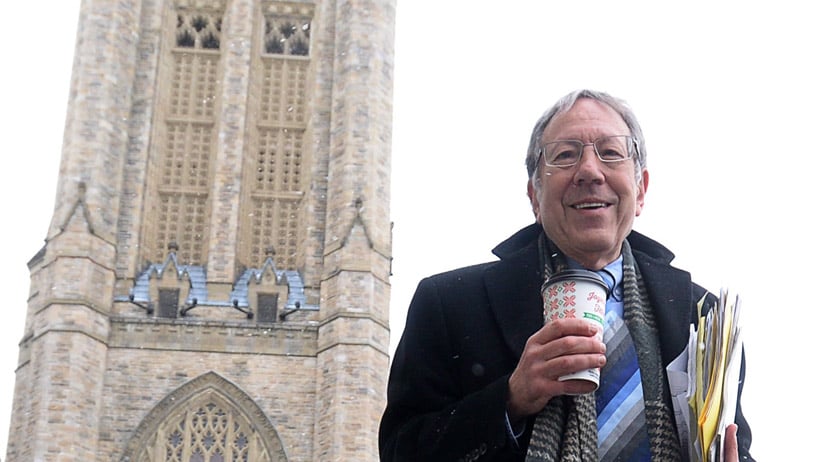 On Nov. 18 in Ottawa, Maclean’s will hand out the Parliamentarian of the Year Awards. Before we do, we’d like to have a frank talk about the work and worth of an MP. This week: is partisanship a necessary evil?

Sometime this fall, Liberal MP Irwin Cotler plans to stand in the House of Commons and ask for unanimous consent for a motion to declare Dec. 10 of each year to be National Speak No Evil Day. On this day, parliamentarians would be asked to refrain from denigrating each other. “Just almost as a symbolic move where parliamentarians, for at least one day, will undertake not to speak ill of each other, kind of an embodiment of civic discourse and civic virtue,” Cotler explains. “I felt we need to restore some civil discourse here as an example for the country as whole.”

He tried this once before, two years ago, but was unable to get the unanimity required to pass the motion in a single move.

Partisanship is something like the foundational riddle of our parliamentary system—as necessary as it is responsible for many of the things that are most easily disliked about the way things work. Opposition is built into the Westminster model as an assurance of accountability. Party lines organize and make coherent our national debates and electoral choices. But then there is all the bickering and shouting and message discipline that breeds. Even among partisans, partisanship is often said to be something that should be put aside for the most serious matters. (“I think we should put partisanship aside,” the Prime Minister told the House recently under questioning about the situation in Iraq.)

The eternal question then might be where partisanship turns from constructive to destructive.

Cotler, a well-respected veteran MP with a long record of human rights advocacy, has demonstrated a certain ability to transcend party lines, even after being the subject of Conservative attacks. He has been publicly thanked for his counsel by Foreign Affairs Minister John Baird, who, despite a reputation as a partisan warrior, has also expressed a desire to see more co-operation across the aisle. Last week Cotler participated in a press conference with Conservative MP James Bezan and NDP MP Wayne Marston to bring attention to the plight of three Iranian prisoners facing possible execution, and he has previously participated in multi-partisan efforts to address concerns about Iran and Darfur. He commends the work of the House’s subcommittee on international human rights, which he says has regularly functioned on consensus, but which, he laments, is typically ignored by the press gallery. “We have to seek subject matter issues that are important to the public where we can come together in common cause,” Cotler says, noting the all-party caucuses that have formed around certain issues.

It is no doubt easier to find common cause around external problems, and it’s on the biggest questions facing the country that the parties more easily clash. But at various moments, seen and unseen, MPs are able to work together in spite of the competition. Last week, a bill sponsored by Liberal MP Frank Valeriote, which would expand the mandate of Service Canada offices to allow for a single point of contact for those reporting the death of a loved one, passed unanimously at second reading. Small moments of collaboration, notes Cotler, can also lead to friendships. “You don’t always look at each other as adversaries, if not enemies, but you see each other as partners for common cause,” he says.

Which is not to say that question period should be replaced by everyone holding hands and singing Kumbaya each afternoon. But it is worth considering whether we have more conflict than is necessary—the modern state of the permanent campaign seeming to drive the parties to see every breath as a precious opportunity to electioneer. The 15 minutes reserved in the House each day for statements by members have become a forum for attacks and even the weekly statement to the House on upcoming business has become an excuse for speechifying.

Cotler tries to draw a line at undue partisanship. “The line that I try to draw is that it should be issue-oriented,” he says. “It should be based on: We’re here for common cause, but we can agree to disagree and we can disagree on the merits and we can debate them and we can argue them and we can oppose each other, but not get personal on it and not engage in undue wedge politics and not try to score cheap political points and not do it at the expense of people’s reputation and things of that nature.”

That might all be very much in the eye of the beholder. After all, one man’s unnecessary attack is another man’s important airing of differences.

But a Speak No Evil Day might be worth a try. If even just for a day, to see what that would be like.