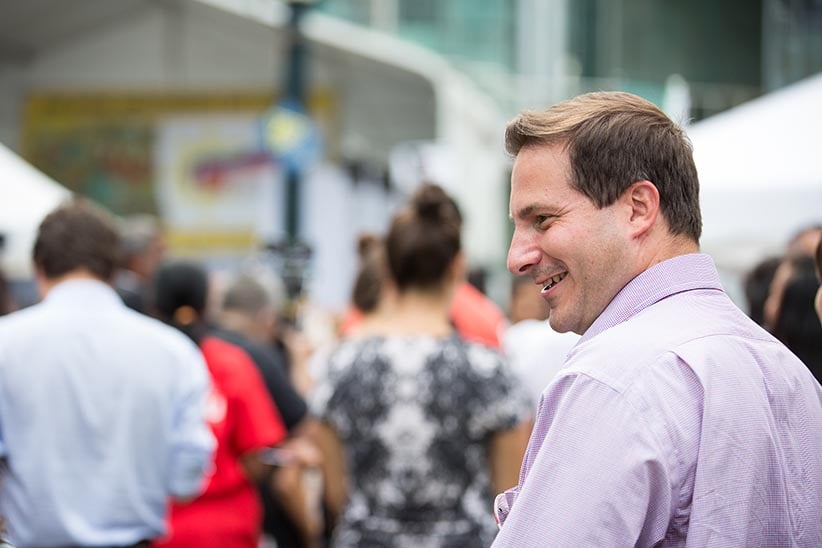 A sure sign of the election campaign nearing its end is lying on doorsteps around the Toronto riding of Eglinton–Lawrence. As Liberal candidate Marco Mendicino goes door-knocking, some homes have pamphlets for all the major parties outside—his included.

Based on the campaign lawn signs, the majority seem to have already decided how they’re voting: Most of them are red, but an almost equal number are blue. There’s enough orange, too, to make an impression. A three-way race is what many locals first expected in a riding with candidates like the Conservatives’ Finance Minister Joe Oliver and the NDP star candidate, Andrew Thomson, a former Saskatchewan finance minister.

By comparison, the Liberal candidate, Mendicino, is a political rookie, which might explain why leader Justin Trudeau announced in February that Conservative MP Eve Adams was jumping ship to join the Liberals and would vie for the party’s candidacy in the riding.

But Mendicino is not a rookie in the politics of persuasion. A former federal prosecutor, he was co-lead prosecutor on the case that prosecuted the “Toronto 18” terror group. He didn’t grumble publicly about Adams parachuting into the riding. Instead, he went door-knocking and perhaps saved Trudeau from an early political blunder.

Lifelong Liberals weren’t impressed by the Tory defector’s arrival. A Forum Research survey in February, soon after Adams announced her intention to seek the nomination in Eglinton–Lawrence, suggested it would be an uphill battle for the new Liberal. Oliver polled at 49 per cent while Adams’s early numbers were at 28 per cent. “I couldn’t believe when she walked across the aisle and Trudeau started touting her as the next big thing,” says John Crawley, a local retiree. “I never send emails, but I sent one [to] the Liberal party and said, ‘Forget it. That’s it.’ ” A staunch Liberal, Crawley wasn’t going to vote for Adams under any circumstances.

Fortunately for the Grits, Mendicino trounced Adams in the open nomination. What does Crawley think of Mendicino? “He’s Liberal, so it doesn’t matter,” Crawley says, “as long as it’s not Eve Adams and it’s not Oliver.” One more vote for the Liberals. One by one, it’s added up.

If Mendicino wins, not only would he reclaim a seat that had previously gone Liberal in every election since the riding was created in 1979, but he would become the third person to unseat an incumbent finance minister since Confederation. Projections this week from the poll aggregator site ThreeHundredandEight.com give Mendicino an 82 per cent chance of winning Eglinton–Lawrence, perhaps with more than half of the votes in the riding. Mendicino knows the polls, and uses them to his advantage.

It’s been about two weeks since Melissa Morrow contacted the NDP, asking for a sign for her front gate in support of Thomson. She respects that leader Tom Mulcair remained firm in his stance to repeal Bill C-51, has remained strong on women’s issues and also brought in Thomson to run against Oliver. “If they didn’t have confidence in their platform and being elected [in Eglinton–Lawrence], why would they run such a big, qualified candidate in this riding?” the mother of two young girls says. “I felt that gave them a lot more legitimacy.”

A longtime Liberal voter, Morrow says her decision to switch to the NDP was largely based on the Maclean’s debate; she had high hopes for Trudeau, but felt he didn’t have any concrete numbers to back up his pledges. “It was just rhetoric,” she says. But she also sees a different set of numbers online, these ones from a Forum poll in late September that had Mendicino surging to front-runner status with 44 per cent of the vote, while Oliver dropped to 38 per cent and Thomson a distant third with 17 per cent.

She says she doesn’t like how the Liberals are trying to scare people with the prospect of vote-splitting, but adds that she would be upset if she voted NDP and ended up missing a chance to oust Oliver.

Mendicino has heard this argument before. He tells NDP leaners like her to vote with their conscience, but with a twist. “If your conscience is telling you to get rid of Mr. Harper, I think the two are reconcilable,” he says. Which means the best way to do that is vote Liberal in the riding.

Judy Goddard, a longtime Conservative supporter in the riding who once worked on Brian Mulroney’s campaign, also sees troubling signs. Why, she asks, are so many big names—such as John Baird, James Moore and Peter MacKay—not running this time around? If the Tories or Liberals win on Oct. 19, she won’t be distraught. But if Trudeau wins a minority, “[the Liberals] are more likely to hop in bed with the NDP, and that terrifies me,” she says.

At one door, another voter in the riding says Harper’s inability to draw star candidates is one reason why he is choosing Liberal this time around.

Mendicino would probably have been welcomed as a star by any party. He studied law at the University of Windsor, which is also where he met his wife, also a lawyer. Out of law school, he got a job articling with the Department of Justice. He then had a stint with immigration law, tax law services, the war crimes unit in Ottawa, then criminal law. His biggest trial was that of the Toronto 18, a case he thinks about often. When asked if he remembers all their names, he lists half with ease before losing track after chatting with a constituent waiting by the door. After nearly a decade as a federal prosecutor, he worked for a year at the Law Society of Upper Canada before becoming co-owner of the firm Ellis Mendicino. In August 2014, he told his family and friends he wanted to get into politics.

At some doors, he’ll ask locals for their support, only to be met with an apology that they won’t be voting for him. “Is it the blue team?” Mendicino will ask. He’ll get a nod in return.

But then there are those NPD signs he hopes to persuade. “It’s probably going to be a game-day decision,” Morrow says. “It doesn’t look very good to have an orange sign and vote red, but we’ll see what happens.” Mendicino wouldn’t object.