A parliamentary committee hopes to demystify the WE deal

Politics Insider for July 16: The finance committee calls witnesses, yet another gloomy economic forecast and the border marriage that wouldn't let barbed wire get in the way 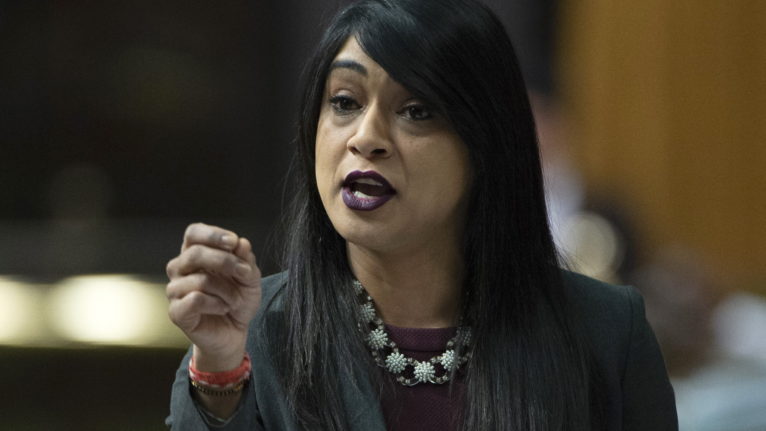 Liberal Bardish Chagger responds to a question during Question Period in the House of Commons, Tuesday, February 26, 2019 in Ottawa. (Adrian Wyld/CP)

This afternoon, frustrated WE-watchers may finally get some answers. The Commons finance committee will hear from some of the key people behind the failed effort to assign the administration of the Canada Student Service Grant to WE Charity. Atop the list is Bardish Chagger, the minister responsible for the file (and a sitting member of the Treasury Board that oversees big-ticket spending).

MPs will also hear from senior departmental officials, including Rachel Wernick, a senior assistant deputy minister at the branch of Employment and Social Development Canada flagged by Marc Kielburger as the source of the conversation that tapped WE in the first place. Watch it here at 3 p.m. ET.

Yesterday, as the workday wound down, WE put out a press release on “planning for the future.” The charity admitted it has an “organizational structure that is more complicated than it needs to be,” and that the structure—in which financial transactions between its charitable arm and for-profit arm caught the attention of an industry watchdog—”needs to be easier to understand and more transparent for all our stakeholders.” The charity is cancelling WE Day events indefinitely, and calling in a suite of advisors to review its internal operations.

The Bank of Canada’s latest economic forecast resembles something of a rollercoaster. The central bank, which didn’t budge its overnight rate, predicted the global economy would decline by five per cent in 2020 before rebounding with five per cent growth in each of the next two years. Tiff Macklem, the brand new bank governor, projected Canada as doing worse, and then better, and then worse than those markers. The bank sees Canada’s economy declining by 7.8 percent in 2020, and then growing by 5.1 per cent in 2021 and 3.7 per cent in 2022. Macklem’s message: debt is going to be cheap for a while.

Is Peter MacKay his own biggest threat? No candidate running for the Conservative leadership has nearly as much political experience as Peter MacKay, the son of a Tory cabinet minister who made his own name on the federal scene. Jason Markusoff, profiling the front-running MacKay in Maclean’s, writes that a career that long has racked up a long list of memorable flubs and gaffes:

MacKay’s experience, meanwhile, is proving a double-edged sword. He is the candidate in this race with nearly a decade in cabinet, but there are controversies scattered among his accomplishments. He’s the one who helped merge the PCs and Canadian Alliance into the powerful Conservative Party of Canada, but amid the deal-making was one notorious piece of deal-breaking. He’s the one offering crossover appeal to moderates, but may struggle to keep social conservatives within the party tent. And he’s the one who’s supposed to be most electable. Yet some Conservatives worry that a candidate so prone to unforced errors risks hurting his party right out of the gate.

Add the C.D. Howe Institute to the growing list of think tanks warning that women aren’t benefitting from the early stages of economic recovery at the same rate as men. Tammy Schirle and Mikal Skuterud are “particularly concerned with the lack of recovery among moms with younger children, whether living with a spouse or alone.” They end with a caution: “We risk losing a large part of Canadian economic activity—and our tax base—if the barriers to all parents’ full participation are not removed.”

Mea culpa: In yesterday’s newsletter, we repeated the Globe and Mail‘s reporting that every member of the Five Eyes intelligence alliance—save for Canada—had already banned Huawei from building 5G infrastructure. A spate of digital fact-checking revealed that, in fact, New Zealand has so far not explicitly banned the Chinese telecom.

Don’t mind the barbed wire: It may be many moons before the Canada-U.S. border is operating normally, but people still need to get married—even if their families are stuck on the other side. This father must never have expected a walk down the aisle quite like this.