A peek into the early scramble to track COVID-19

Politics Insider for March 17: Thousands of disclosed docs continue to tell the pandemic's story, the Tories want to take a closer look at the Rogers-Shaw deal, and an unfortunate CPC tweet 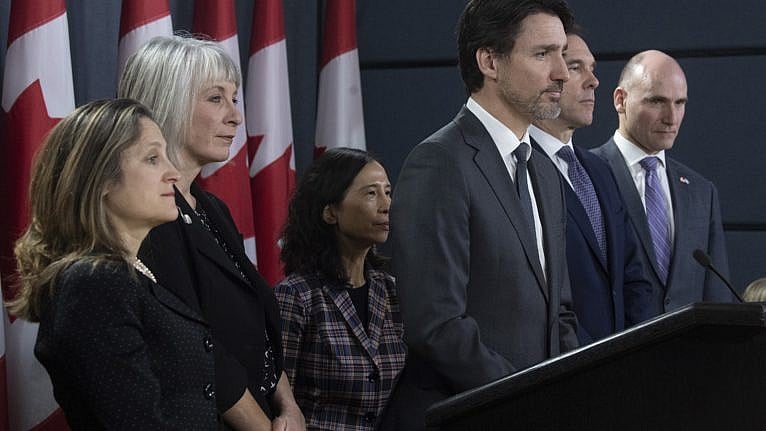 Welcome to a sneak peek of the Maclean’s Politics Insider newsletter. Sign up to get it delivered straight to your inbox. Also, Happy St. Patrick’s Day! Save some green on our magazine. Subscribe for just $6!

The latest batch of documents dumped at the feet of the Commons health committee offers a window into just how federal officials tried to keep track of COVID-19’s disastrous impact. Early on, the Public Health Agency issued daily situational reports—SitReps, like this one from February—that monitored the global spread and response (and offered risk assessments). The Privy Council Office tracked trends in opinion polling. And the feds maintained a Restart Dashboard that tracked the virus’s spread and health-care capacity.

On March 19, a senior policy advisor to Minister Anita Anand even floated the idea of amending the Emergencies Act—a hotly debated public-safety issue for much of 2020—to “expand the Ministers authority.” (The response from the justice minister’s office, if there was one, wasn’t included in the document dump.) Blacklock’s Reporter first reported that tidbit.

An undated presentation explained the crucial differences between the roles of Health Canada regulators and the National Advisory Committee on Immunization—a distinction that’s often misunderstood as regulators approve vaccines and the NACI makes recommendations on how they should be administered.

Yesterday, the NACI recommended the AstraZeneca vaccine be administered to anyone over the age of 18. That new advice comes on the heels of a cascading series of European countries suspending use of that shot. In her latest Vaxx Populi entry, Patricia Treble asks and answers: Why isn’t Canada pausing AstraZeneca injections?

Tomorrow marks the launch of the Tory policy convention. Yesterday, leader Erin O’Toole talked a little policy. He pledged not to cut foreign aid if elected—a marked difference from predecessor Andrew Scheer, who promised to cut the aid budget by 25 per cent. O’Toole said his government would tie funding to outcomes, a hallmark of the Harper era. The federal government is already dabbling in “incentive-based funding,” a Treasury Board policy change that dates to 2017. Regular readers will recall a federally funded project in Colombia that uses complex formulae to pay the NGO doing the work.

Conservative MP Pierre Poilievre said on Monday that his party would review the proposed Rogers-Shaw merger. Yesterday, Poilievre pitched a parliamentary study of the deal that would “hear from customers, workers, business leaders, engineers, economists, and other experts.” The telecom sector is over-regulated, he argued, and the work-from-home era demands cheap, reliable internet that only the free market can provide. The NDP (sort of) agrees, arguing the Liberals must “promote real competition.” (New Dems also want price caps, not so much a free-market solution.)

Last week, this newsletter noted the relative dearth of women in the latest round of senior military promotions. Adam Chapnick, a professor of defence studies at the Royal Military College of Canada, alerted us to the fact that more women received promotions than were mentioned in DND’s press release. We asked the department for the total number of women currently in senior roles. The answer: 14. That means women comprise 10.3 per cent of all “general and flag officers” in the military brass, short of the total proportion of women in the Armed Forces—that’s now 15.9 per cent—but up from just six women in 2016.

Meanwhile, the Ottawa Citizen first reported yesterday on the resignation of Lieut.-Col. Eleanor Taylor, a high-ranking military officer who served in Afghanistan. Taylor said in a letter to her commanding officer that she was “sickened” by ongoing investigations into sexual misconduct, though she was “not surprised.” Taylor alluded to “insidious and inappropriate use of power for sexual exploitation.”

Defence Research and Development Canada is thinking about resilience in a post-pandemic world. The federal agency is asking Canadian innovators to put on their thinking caps. “The distinction between natural and human-induced hazards is blurring and the inherent vulnerabilities associated with our modern society transcend this perceived dichotomy,” reads a DRDC call for proposals that’s looking for tech that can protect against future public-health crises, embrace automation and contactless operations and guard against broken supply chains.

You’ve probably seen the tweet. Yes, that tweet. The Conservative party tweet that accidentally praised the Liberal effort to protect Canadian jobs over their own. We all make mistakes. Your newsletter correspondent has stomached some embarrassing errors in his career. Botched tweets are moments that demand compassion. At least this snafu didn’t end up sending an influx of phone calls to a used car dealer in Ohio.

The feds are auctioning off a vintage typewriter. If you’re in the market for a Smith Premier No. 4—note: it might not be functional—you’re not alone. Bidding started at $5 but is now more than 20 times higher.