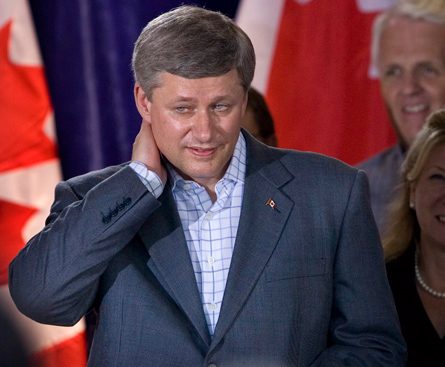 As ever with Stephen Harper, there is an in-your-face element to the latest batch of Senate appointments. It’s almost as if he said to himself, okay, if I’m going to get slammed for these appointments anyway, what are the most obnoxiously partisan, disgustingly sycophantic choices I can make? I know — I’ll name my former press flack! No, wait — I’ll name the president of the party! Or maybe — yes! — the most hyper-partisan, Grit-hating thug I know, my former campaign manager!

I’ve got it! I’ll appoint all of them!

Yes, I know, the Liberals did just the same for years — the same Grits who are now assailing the appointments, just as the Tories used to attack theirs. This is the cycle we have become caught in, each party justifying its own excesses by the other’s, each hypocritically accusing the other of hypocrisy. And the public, educated by long useage to expect no better, cannot even be roused to outrage any more. Time was when this sort of flagrant cronyism would have caused a scandal. Certainly in any other country it would. But not here, not any more.

We have a deeply, deeply cynical political culture, and the Senate is a big part of it. A country that teaches itself to accept that one of its two legislative bodies should be composed almost entirely of appointed party hacks and bagmen (the other being made up of obedient ciphers) can accommodate itself to a great many things.

Our tolerance for separatism acted in much the same way. We knew it was wrong, but we told ourselves it was right: that the reason we tolerated the intolerable — a perpetual threat to destroy the country unless ransom was paid, in larger and larger installments — was not because we were weak and fearful, but because we were decent and wise. Thus fear begat shame, and shame begat rationalization, and rationalization begat our current state of affairs: total amorality.

I suppose you can mount some sort of chess-playing rationale for Harper’s latest descent: he had to appoint somebody — might as well be people whose loyalty he can depend upon; with a majority in the Senate as early as next year, he’ll be in a better position to pass Senate reform; if he’d appointed respectable, upstanding pillars-of-the-community types, the kind with cross-party support, he’d simply be rehabilitating the status quo. So you see, by appointing egregious partisan hacks, he’s actually still a reformer.

But if that’s his strategy, why be so timid about it? Why not appoint his horse? Or convicted criminals? Colin Thatcher to the Senate!