A preview of the 2017 federal budget

First budgets for new governments rarely contain much in the way of surprises. While an over-simplification, there is some truth to the idea that first-year budgets simply take the campaign platform and put it into fiscal form.

The content of the second budget tends to contain more surprises as new programs, and priorities emerge that were not in the platform. In this budget, the government has telegraphed possible items that will be in Budget 2017 through references to pilot projects and commitments to “conduct broad-based consultations” with affected stakeholders. 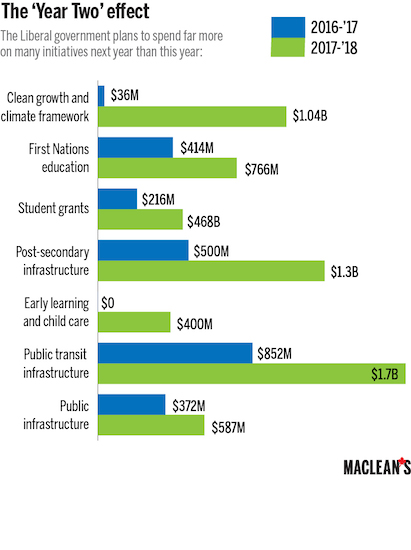 Additional supports for the automotive sector

Budget 2016 commits to working with stakeholders to “better influence investment location decisions necessary for the long-term competitiveness of the Canadian automotive sector” through examining “approaches that will allow it to maximize the impact of federal support offered to the automotive sector, including through assessing the terms of the Automotive Innovation Fund.”

If Budget 2017 has a theme, it is likely to be “innovation.” This year’s budget commits to “redesign and redefine how it supports innovation and growth” through a new “innovation agenda.” There are a number of funding announcements in the budget to boost academic science and research, along with supporting private sector innovation. However, these would appear to make up only a small portion of the government’s new innovation agenda. There is a little discussion of reforming scientific R&D credits (SRED), a program that neither government nor industry is entirely satisfied with. I would not be surprised to see reforms to SRED in Budget 2017.

The budget commits $7.7 million for technical studies around Via Rail’s capital investment requirements and $3.3 million over three years to study Via’s high-frequency rail proposal. Given the three-year study period, do not expect to see details on a major high-frequency rail program until Budget 2019 (at the earliest), but Budget 2017 could contain new capital investments for passenger rail.

This is less of a telegraph and more of an outright statement. Budget 2016 commits to “conduct a review of Canada’s international assistance policy framework,” which will “inform Budget 2017, and will take into account the government’s international priorities as well as domestic considerations.”

Budget 2016 reconfirms the goal of working with the provinces on pension reform in order to make a “collective decision before the end of 2016.” The government has committed to “launch consultations” with Canadians on “enhancing the Canada Pension Plan.” Expect details of possible reforms to be included in Budget 2017.

While Budget 2016 includes tariff elimination for a dozen manufacturing inputs along with eliminating the 25 per cent tariff on ferries, it also includes a promise to “launch public consultations on eliminating tariffs on food manufacturing ingredients other than supply-managed products.” Expect many of these tariffs to be eliminated in Budget 2017, along with possible further rounds of tariff elimination.

Budget 2016 eliminates a number of boutique tax credits and contains a commitment to review the tax system “with a view to eliminating poorly targeted and inefficient tax measures.” Given that many of these credits are popular with Canadians, I would expect to see them eliminated earlier in this government’s mandate than later, so these eliminations may appear in Budget 2017.

How aggressive Budget 2017 will be on these items might depend on the level of economic growth that occurs over the next year. Most of these items (with the notable exception of tax reform), on net, cost the federal government money. With a new government committed to declines in the debt-to-GDP ratio, a slowing growing economy in 2016 would make it difficult for substantial new government expenditures.