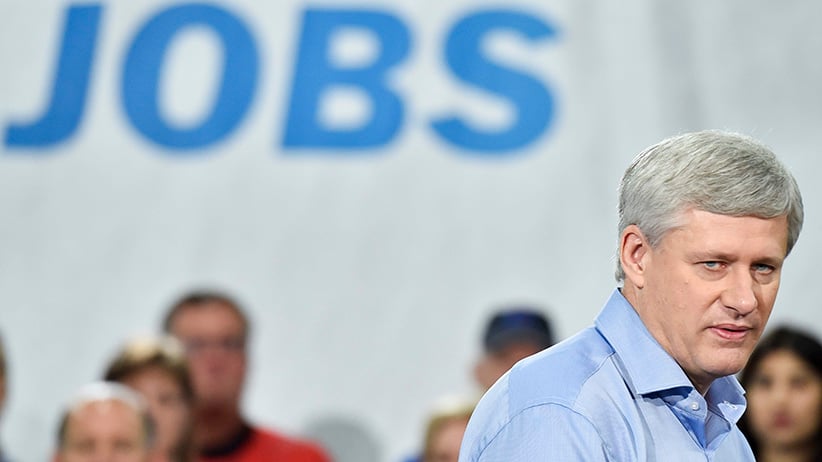 To the constant “ka-ching, ka-ching” chirp of a cash register, Nicole Ropp, a married mother of three, piled up $20 bills as Harper rhymed off a list of a purported tax increases Canadians can expect from a Liberal government. For the Ropp family, it all added up to about $8,000, according to Harper.

However, Harper’s list included a number of alleged tax hikes that aren’t on the Liberal agenda and omitted a number of other measures aimed at giving middle-class families more, not less, money.

A Liberal government would limit contributions to Tax-Free Savings Accounts.

This is correct. Liberals would cap the annual amount Canadians can sock away in TFSAs at $5,500, rolling back the Harper government’s recent increase to $10,000. Liberals maintain increasing the cap would benefit primarily the wealthy.

Liberals would “cancel child care cheques for some families … That’s nearly $2,000 per year per child under the age of six and over $700 for children between 6 and 17 — gone.” For the Ropp family, he said that would amount to a loss of $3,360 per year.

Harper didn’t mention that the Liberals are proposing to replace the Conservatives’ existing universal child care benefit with a new monthly, tax-free child benefit. Liberals maintain their benefit would give more money to 90 per cent of Canadian families than they currently receive. However, the benefit would be gradually phased out for those earning more than $150,000.

Liberals would eliminate the tax advantage enjoyed by couples with children by allowing them to split their income for tax purposes.

Liberals would make $6.5 billion in cuts to tax credits and deductions in order to balance their budget in the fourth year of a first mandate. Among other things, the child fitness credit, the children’s art credit and the volunteer firefighter tax credit are all “likely on the table.”

As part of their plan to find $6.5 billion in savings, the Liberals have promised to review boutique tax credits and deductions that have multiplied like topsy over recent years, with an eye to reducing benefits that unfairly go to those earning more than $200,000 a year. They have not identified which tax benefits could be cut, other than to propose a cap on stock option deductions.

As for the specific credits Harper predicted would be cut, Trudeau said Monday: “We’re not going to be cutting those tax credits.”

He didn’t mention that the Liberals are promising to cut taxes across the board for Canadians earning between $45,000 and $90,000, tax relief Trudeau says is worth up to $670 per person, per year. Nor did Harper mention that Trudeau is also promising to hike taxes on the wealthiest one per cent of Canadians.