A star sculpture brings a New Orleans back story to Canada 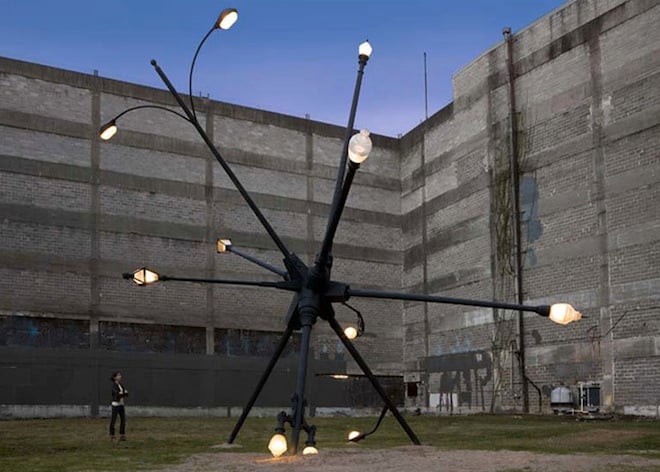 The National Gallery of Canada is set to open a show later this week of recent acquisitions, called “Builders: Canadian Biennial 2012,” and the exhibition’s most prominent piece might be a large outdoor sculpture by the mid-career Montreal artist Michel de Broin. It’s hard to resist, given its shape, touting Majestic as the star of the show.

De Broin created its exploding-star form by taking a mixed bag of New Orleans street lamps that were damaged and uprooted by Hurricane Katrina and attaching them to a hub. There’s playfulness in the outsized Tinkertoy-like result, but knowing how the parts were salvaged from disaster and turned into something beautiful lends it, at least to my eye, a feeling of drama and optimism.

It was created to be installed temporarily last year in downtown New Orleans and was only recently moved to a lawn beside the National Gallery, where Parliament Hill rises in the background.  I went to look at it just last weekend in a fall drizzle. I haven’t seen it after dusk with its lights on yet, except in photographs, and I expect that to be a whole different experience.

De Broin plans to be in Ottawa for the official unveiling on Wednesday, which by a strange coincidence, given Majestic’s origins, will come in the wake of Hurricane Sandy. He’ll be arriving fresh from Changwon, South Korea, where he had travelled for an exhibition, and it was from there that he answered some questions for me by email.

Q: The story behind Majestic is intriguing. Given its link to New Orleans and Hurricane Katrina, do you think people who see it in Ottawa should know the story of how you built it, or does that matter?

A: It may confront your desire for fixity and stability, but my sculptures like to travel. Art works love being crated, manipulated by precocious hands and exhibited in different countries. The sculpture is happy here. New Orleans suggests an idea to me and conspires to make it become real. The sculpture has an origin there, but hopefully an art work after its conception is constantly evolving in time and in space.

Sculptures like to travel but don’t like to sleep in a vault. I selected a collection of street lights salvaged from the hurricane and created a hub to connect them together. The ray structure shows unexpected possibilities inducing hope and freedom. The title comes from the name of a nearby funeral home in New Orleans. Later I had to change sites for logistical reasons but decided to keep the bizarre title.

Q: You lived in Europe for a few years, I understand, before returning to Montreal last year. Why did you decide to come home?

A: I was always going back and forth between Europe and Montréal, and constantly changing studio address. There are many opportunities in Europe, but I needed to invest in my own studio and decided to take a postal code in Montreal. The mobility was practical, but now I’m in love with a French women who wants to live in Montreal. This being said, I’m currently answering these questions from my hotel room in Changwon.

Q: As you know, Majestic is being unveiled in Ottawa just as the National Gallery of Canada opens a show of recent acquisitions by many artists. Any thoughts on the way the NGC is highlighting contemporary art?

A: I can see the renewal of a true interest in our museums and institutions toward contemporary art, comparable to what I have seen before in U.S. and Europe, though it may be because contemporary art is far more affordable then Baroque art or modern art. But what I know for sure, and it is still a secret: my piece was a private donation from a great patron of the arts. This will be revealed at the launch on Oct. 31.

Q: Back in 2009, you attracted a lot of attention for hanging a giant disco ball over the Luxembourg Gardens in Paris. I’ve only seen photos of it, but the concept seems more ironic, maybe less directly emotional, than a piece like Majestic. Does that sound right to you?

A: That installation was very short, and also difficult to document,  and the great visual result of the work on site was unexpected. The large facets (on the mirrored ball) created reflections on the surroundings, resembling pieces of paper thrown in the wind. It is difficult for someone who didn’t see the piece to understand the difference between the image we have of a disco ball and the actual phenomenal experience given in the beautiful Jardin du Luxembourg.

Q: Much of your sculpture looks so weighty and solidly built, particularly for an era when a lot of our experience is digital or virtual. Why do you think you’re interested in making heavy objects that are hard to lug around?

A: It is because I’m working the other way around than what you have experienced in culture. A lot of my work is engineered, calculated or computerized, but then it materializes in concrete material, often alongside found objects. I think it can give you this feeling of being heavy or hard, but what is actually hard in sculpture is not the material, but the idea.

Q: You’ve got an exhibition coming up at the Musée d’art contemporain de Montréal next spring. Can you give us a sense of what to expect?

A: You will see how an object of war, conceived to destroy, can be forced to love. I’m also working on a collection of holes by which people escape their everyday. There will be new work and older work, it is my biggest show to date, and it will be fairly spontaneous because I don’t have much time to think about it.