A tentative, reviewable, optimistic light at the end of the pipeline

Politics Insider for March 2: A tentative Wet'suwet'en deal, new COVID-19 cases in Ontario and the limits of what federal Tories will accept in a potential leader 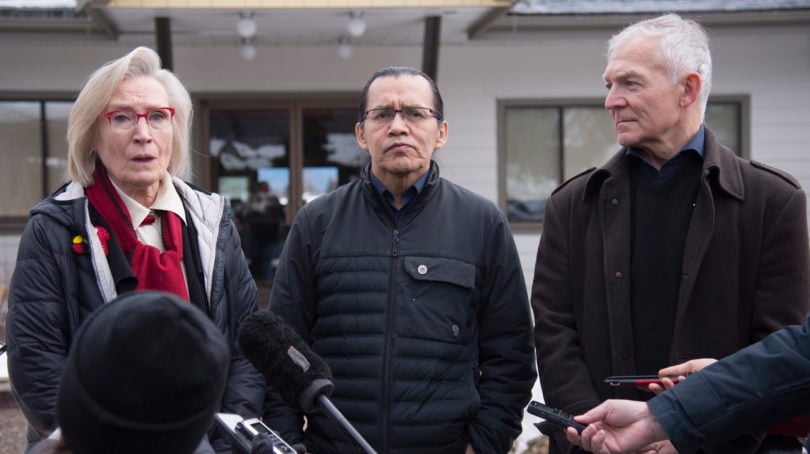 An end in sight? On Sunday afternoon, the Canadian government came to a tentative agreement with one of the Wet’suwet’en hereditary chiefs, who has passed it onto his fellow chiefs for review. The First Nations group still opposes the proposed Coastal GasLink pipeline that would run through their territory, but Chief Woos emerged from his meeting with Crown-Indigenous Relations Minister Carolyn Bennett with optimistic words. “This is where it starts,” he told reporters. “The duty to consult as well as the rights and title.” The issue of rights and title, which is complex and fundamental to this whole issue, harkens back to a series of court rulings in the 1980s and 1990s that laid out the terms of First Nations’ jurisdiction over the land.

Thou shalt not COVID thy neighbour. While sales of Corona beer take a huge hit because of COVID-19 (a.k.a., unfortunately for the brewmakers, the coronavirus), health officials in Ontario confirmed four new cases on Sunday, bringing the provincial total to 15. The newly discovered cases involve three men in their 40s, 50s and 60s, and a woman in her 70s. All of them are in the Greater Toronto Area, and all have had recent contact with, or are related to, people who got infected during trips to the Middle East. Those four are now safely in self-isolation or being otherwise looked after, and the risk to the greater population remains low, officials say.

Other countries are not so secure. South Korea, Iran and Italy have all suffered much greater numbers of infection, and in the United States, Florida has announced a state of emergency while a man in Seattle became the country’s second person to die from the virus. While Chinese officials say they are regaining control of the situation, there are still 80,026 confirmed cases across the country. In Maclean’s, epidemiologist Timothy Sly warns that a second wave could sprout up this fall:

As anxiety rises across the globe, there are other practicalities to consider. If and when a wider outbreak reaches Canada, we can expect a surge of patients at emergency rooms, an increased demand for lab testing, and a need for more hospital beds. How prepared are we for the tidal wave of COVID-19?

In bad taste. A cartoon depicting teenage climate activist Greta Thunberg being sexually assaulted was printed alongside the logo for X-Site Energy Services, an Alberta energy company, earning widespread condemnation around the world and in Alberta. X-Site’s general manager, Doug Sparrow, told Global News he’s taken down the company’s social media profiles due to the overwhelming backlash, but denies that he had anything to do with it. “I never posted it,” Sparrow said. “I’m not a pedophile. I’m not what they say. All right? I’m not that guy. We did not post that picture.” Thunberg, for what it’s worth, sounded unflappable in her response: “They are starting to get more and more desperate… This shows that we’re winning.”

Meanwhile, in Tory land, Richard Décarie, an outspoken social conservative who raised $25,000 and garnered 1,000 signatures to run for leader of the federal Conservative party, has been barred from the race. The news came as a surprise on Saturday, when the CPC released the final list of leadership candidates and Décarie wasn’t on it.

Décarie took to Twitter to blast the “unelected Leadership Election Organizing Committee,” saying “no reasons were provided to me by the committee” regarding his rejection. Reporters were quick to point out two interviews Décarie recently gave: one in which he claimed being gay is a choice (a statement that many high-profile Tories swiftly denounced), and another wherein he announced, if elected prime minister, he would force provinces to defund abortion, seemingly unaware of the inherent contradiction of a small-government Conservative leader telling premiers exactly what to do.

However, a party insider anonymously told the National Post that those two interviews didn’t actually matter much, and the concerns stemmed from his entire application, which includes background checks, social media scouring and a lengthy questionnaire. There are still several social conservatives in the running. To wit, here’s the official list of candidates: Marilyn Gladu, Rudy Husny, Jim Karahalios, Leslyn Lewis, Peter MacKay, Erin O’Toole, Rick Peterson and Derek Sloan.

One of the frontrunners of the bunch is Peter MacKay, who gave a lengthy interview to the Globe and Mail this week, in which he refused to apologize for implementing mandatory victim surcharges against criminals during his time as justice minister under Stephen Harper. The backstory: in 1989, the government introduced an optional victim surcharge levied against criminals, both to hold offenders to account and to help fund some victims’ services. Judges could waive the fine if the offender couldn’t pay it. In 2013, MacKay and Harper made the fine mandatory and increased its amount. In 2018, the Supreme Court struck down the law that made it mandatory with a 7-2 ruling, arguing that “the surcharge constitutes cruel and unusual punishment and therefore violates Section 12 of the (Charter of Rights),” and that its impact and effects “outrage the standards of decency, and are both abhorrent and intolerable.”

“I will never apologize for having stood up for victims,” MacKay told the Globe. “And I think that the victim surcharge would and could and should work well for Canadians.”

A recession of the mind. According to a new study by Pollara, nearly half of Canadians are in a “psychological recession.” Jason Kirby summarized the findings in Maclean’s. During much of 2019, many Canadians—including most Westerners—held negative opinions about the economy, and felt the country was in a recession. Certainly 2020 doesn’t feel off to a better start, with COVID-19 compounded by trouble from pipeline activists, an imperilled rail system and Teck Resources confirming fears about the future of Canada’s oil and gas sector.

This country is not broken. It is arguably among the least broken countries in human history. It seems like a paradox, but we continually fail and falter our way to success. We bumble along, doing everything wrong from military procurement to hockey. Our Premiers will not talk to our Prime Ministers, our economies crash and boom. Our politicians are idiots, corrupt and clueless. The media is fake. The French can’t stand the English. We’re racist and sexist. It’s too cold.

And yet—here we are. Doing pretty damn well. Better than well, actually. Incredibly, we’re doing fantastic. And the most incredible thing of all is that most of us have no idea.