A true NDP homecoming in Saskatchewan

The party of Tommy Douglas stands finally to make inroads in Saskatchewan, thanks to a handful of new urban ridings 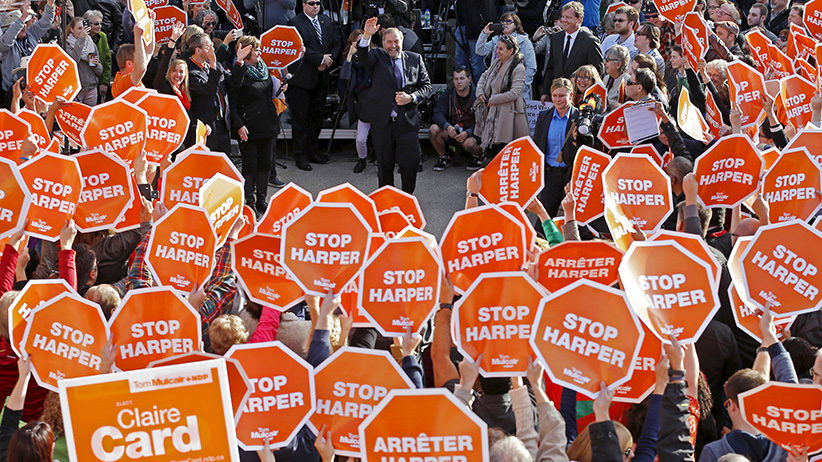 The fact that it was a sunny and unseasonably mild Monday afternoon in Saskatoon was likely not the only reason NDP Leader Tom Mulcair felt grateful as the Thanksgiving weekend ended. Although his supporters in much of the country are having to crane their necks higher and higher to see where the other parties are in the polls, here, New Democrats were rallying outdoors in the place New Democrats are most likely to pick up seats.

That made the Saskatoon rally an NDP homecoming on two fronts, back to the sort of advantage the polls gave the party early in the campaign, and to the province that launched Tommy Douglas, the Co-operative Commonwealth Federation/NDP, and Medicare.

“Here, I know I’m playing a home game, talking about that, but it’s true,” Mulcair said. “It’s here in Saskatchewan, on the Prairies, that that vision—that we all stand taller when we stand up with each other, that we all benefit when we help someone else—that we can get that done.”

Saskatchewan gave Jack Layton’s NDP 32.3 per cent of its votes last election, one of its strongest provinces. But it won zero seats, the party’s fourth straight shutout in its spiritual homeland. The Tories won 13 of 14 seats, while the Liberals once again re-elected Ralph Goodale, despite getting less than nine per cent of the vote provincewide.

The NDP’s markedly better chances of winning seats this year has less to do with Mulcair than it does the redrawing of the map that had given Saskatchewan such disproportionate representation.

For the first time since 1966, the potash province will have genuinely urban ridings—three in Saskatoon, a pair in Regina—instead of the pizza-slice ridings that dipped their tips into the big cities but stretched them far out into the countryside. Imagine an Ontario riding of Spadina–Toronto–Muskoka–Parry Sound; that’s the sort of mutant federal representation that existed in Saskatoon–Wanuskewin, which covers that city’s central business district, as well as Lily Plain, a tiny hamlet nearly a two-hour drive away.

The new boundaries for Regina–Lewvan and Saskatoon–West would have given the NDP urban members in the 2011 election.

“People who said they never felt their vote counted as an urban person, within these ridings, really felt like they could make a difference and send an NDP MP,” says Sheri Benson, the party’s candidate in Saskatoon–West. The new riding is 20 per cent Aboriginal, and those voices will be much more pronounced in a city-only riding, she says.

A longtime CEO of the local United Way, Benson says the split rural-urban attention of the city’s Conservative MPs may have made it tougher ever to get them to business roundtables on affordable housing.

The business of redrawing electoral boundaries is supposed to be as non-partisan a job as there is in the land of Canadian government appointments; lines are redrawn or adjusted based strictly on population shifts and community cohesion. When the Saskatchewan panel concluded that Regina and Saskatoon needed urban boundaries for the 2015 election, the lone Liberal MP cheered and nearly all Conservative MPs opposed the changes.

“Rural Saskatchewan plays a vital role in supporting the urban population centres,” Saskatoon–Rosetown–Biggar MP Kelly Block wrote to the commission. That message was repeated in a Conservative party statement, after the central office admitted it had sent robocalls opposing the boundary redrawings. Block, a former small-town mayor, has chosen to contest a new rural riding outside Saskatoon, while Regina-area MP Tom Lukiwski has done the same to run in a massive constituency that engulfs Moose Jaw and a huge swath that spans from Regina to Saskatoon.

The urban part of Lukiwski’s former riding is part of Regina–Lewvan, which is emerging as a three-way race, with a former city councillor running as a Liberal making a late push, with help from neighbouring veteran Goodale and the national poll position of Justin Trudeau’s party. With a negligible provincial presence, the Liberals have long lacked much of a Saskatchewan presence, though a recent Mainstreet Research poll released last week showed them scrapping for a close second place in Regina behind the Tories. The NDP led the Conservatives 31 points to 28 in the larger city of Saskatoon.

A 2002 boundary commission had proposed urban ridings in its initial report, but reverted to status quo after a major backlash. The 2012 commission, though it faced heavy opposition and even a dissenting report from one of its three panelists, stood its ground.

John Courtney, a political scientist on the commission, says the rapid urban boom and immigration wave meant a lot fewer residents of Saskatoon or Regina still had links to the farm. He recalled the presentation by one newcomer from the United States.

“She said she wouldn’t know a combine if she saw one,” he says. “This was kind of a mini-reflection of what a lot of people were telling us one way or another: Theirs were urban concerns: drugs on the street, high crime rates, the need for daycare, immigration and refugee questions.”

Whether the Conservatives, NDP or Liberals win Saskatchewan’s new city ridings, no longer will they have to juggle those concerns with queries about grants for drought compensation or gripes about rutted dirt roads.