A word of advice for newly un-muzzled federal scientists 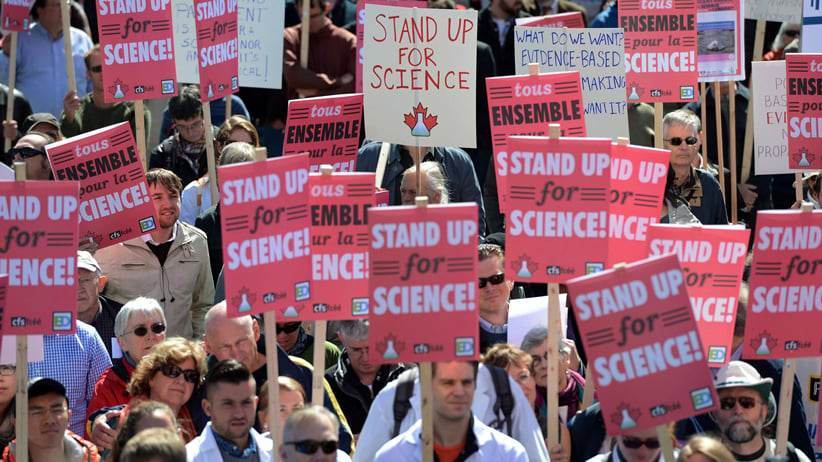 Scientists rally on Parliament Hill in Ottawa on Monday, September 16, 2013 as Canadian scientists and their supporters hold demonstrations across the country, calling on the federal government to stop cutting scientific research and muzzling its scientists. Sean Kilpatrick/CP

To understand the tension, it’s useful to remember one of the stated “values and ethics” of federal public servants: the duty to “loyally carry out the lawful decisions of their leaders, and support ministers in their accountability to Parliament and Canadians.” A short-hand version of this ethical value is: “fearless advice and loyal implementation.” In other words, non-partisan, professional public servants must give their best advice to ministers, then loyally support the lawful decisions of the democratically elected government, regardless of their personal views. If they find it impossible to support the government, they can resign and make the reasons for their resignation public. Such resignations are rare, but they happen often enough to remind us of both the ethical duty and the integrity of public servants.

The advice that ministers consider in making decisions comes in many forms. Scientific, economic, social, legal and political considerations all may be relevant. Voters entrust ministers, not unelected public servants, with the responsibility of weighing the various factors and coming to a decision. Ministers need to be ready to defend their decisions and actions before Parliament and the public. Thus, when ministers make decisions, scientific evidence is but one of the things they may need to consider.

A common and natural issue that arises whenever journalists talk to government scientists is whether a minister’s decisions are consistent with scientific evidence. The other considerations that come into play are often ignored. Thus, it is a common occurrence in media interviews for government scientists to find themselves facing a difficult question: Are the government’s decisions consistent with your scientific work?

Can this tension be managed? Yes, but only with care and restraint. Clearly, government scientists should continue to make their work publicly available by publishing it in scholarly journals and discussing it in scientific conferences. When speaking with journalists, they should be cautious and avoid talking about policy issues that are the prerogative of the minister. For their part, journalists should respect the ethical duty of government scientists to support the government and avoid putting them in apparent conflict.

Paul Boothe is Professor and Director of the Lawrence Centre for Policy and Management at Western’s Ivey Business School. He is a former federal and provincial deputy minister.