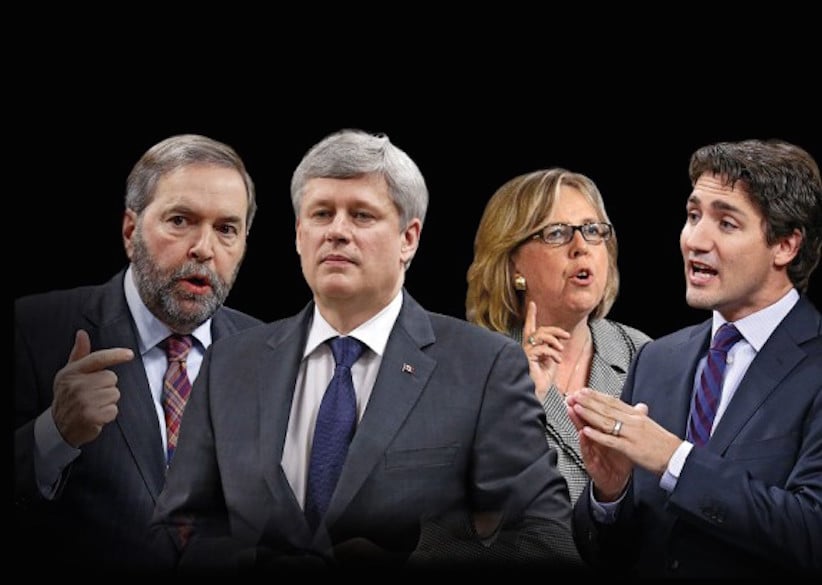 After a spate of recent polls suggesting the NDP had grabbed a clear early lead in the federal election campaign, Abacus Data released its latest snapshot of voter support this morning, showing that Thomas Mulcair’s party lost a little ground in late August and the close three-way race has tightened.

According to the firm’s online survey, conducted Aug. 26-28, the NDP’s national support stood at 31 per cent, down from 35 per cent just two weeks earlier. The Conservatives were up over the same period by a single point to 30 per cent, virtually tied with the NDP, with the Liberals breathing down their necks, up two points to 28 per cent. 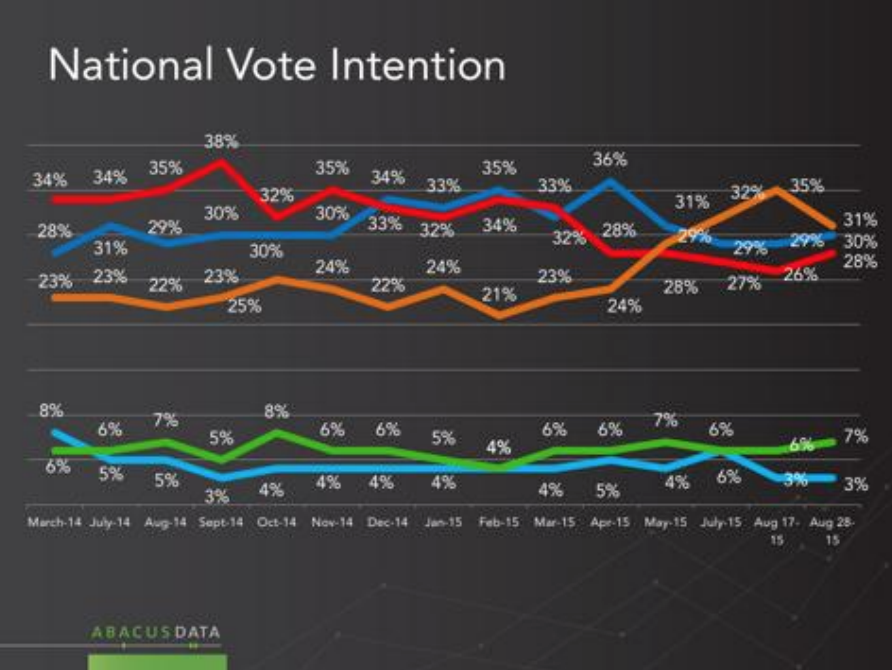 This is the closest Abacus has pegged support for the three main parties in its polling since May, when a breakthrough win by their provincial cousins in Alberta’s election gave the federal NDP a powerful boost. Beneath the almost even national standings in overall support, however, Abacus found other telling signs of voter opinion that point to quite different strategic challenges facing the three parties.

RELATED: Paul Wells: What you should know about the Trudeau poll numbers

For Mulcair, the most worrying number has to be a six-point drop in NDP support over two weeks in Ontario—that unignorable battleground, accounting as it does for for 121 ridings out of the 338 seats in the House of Commons. The NDP stood at 26 per cent in Ontario, where Mulcair campaigned prominently last week, trailing the Liberals at 34 per cent and the Conservatives at 33 per cent. 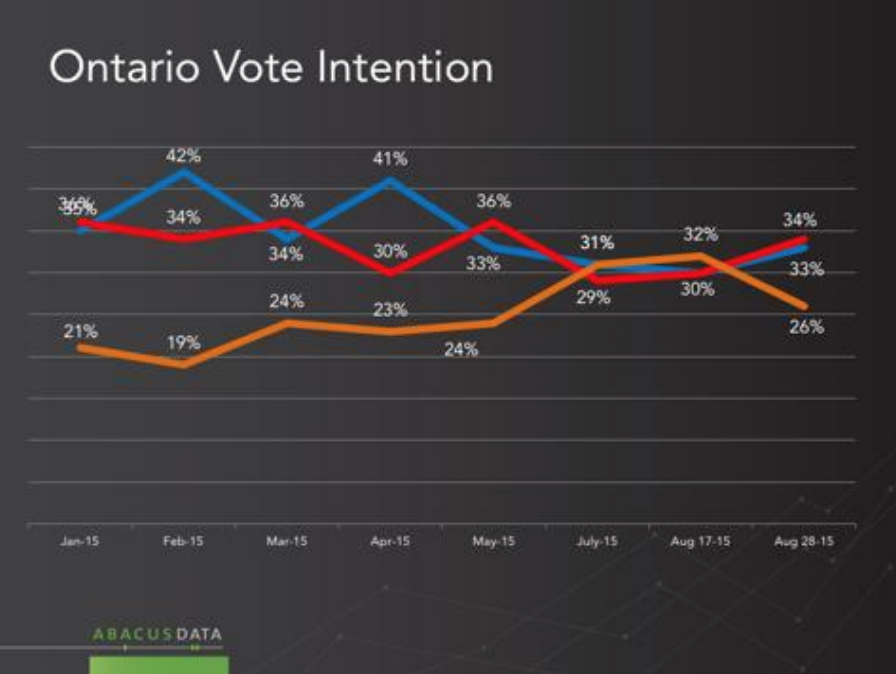 Although the NDP continues to enjoy a big lead in Mulcair’s home turf of Quebec, and is pretty much tied with the Tories for first in B.C., its support has softened in both those populous provinces, too. Combine those slight declines with the more worrying drop in Ontario, and it adds up to the first national slippage for the NDP after seven straight months of steady climbing.

“If you look at our own trend lines, it’s the first time since February, when the NDP was at 21 per cent, that the NDP number is down,” Abacus CEO David Coletto said in an interview. “Every month since then in our tracking they’ve gone up, and they reached a peak of 35 per cent about two weeks ago.”

Coletto added: “Perhaps the momentum the NDP was carrying is starting to dissipate. That’s troubling, if you’re a New Democrat, since we’re entering into the stage of the campaign when people are going to be paying more attention to it, after Labour Day.” 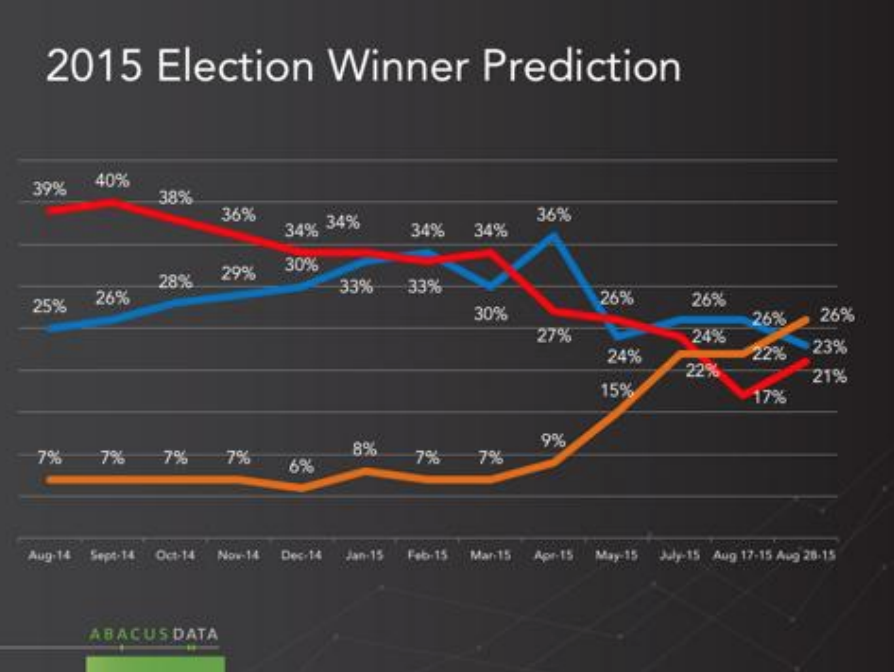 Conservatives might be buoyed by the Abacus poll’s finding that they didn’t lose much declared voter support as a result of unflattering headlines, through much of August, about the way Harper’s top aides handled the Mike Duffy affair. (Duffy’s trial shut down last week for a long break that will last until after the Oct. 19 election.) Still, Coletto cautioned against the Tories breathing too easily on the impact of the courtroom revelations: He noted that three in 10 voters say the trial will affect their vote, with 85 per cent of those saying, not surprisingly, the story makes them less likely to vote Conservative.

Drilling even deeper into the data, Coletto noted that among “soft” Tory supporters—those inclined to want Harper to remain Prime Minister, but not necessarily sure yet of how they will vote—15 per cent said the Duffy trial makes them more likely to vote for one of the other parties. “It’s not a huge number of people who say they are less likely to vote Conservative because of the Duffy trial, but [it’s] an important [group of voters] for them,” Coletto said.

Part of the reason Harper can’t afford to lose the potential support of any Canadians still theoretically open to him is that the pool of potential Conservative voters is relatively small. Just 42 per cent of voters say they would consider casting a ballot for the Conservatives, far behind the NDP’s leading 62 per cent, and well back, too, of the Liberals’ 55 per cent.

Indeed, that big lead in the share of the electorate that remains open to Mulcair’s campaign is a major reason for New Democrats to remain upbeat, despite the Abacus poll showing the NDP with less momentum. “The potential is still there for them,” Coletto said.

Their recent rise has resulted in 26 per cent of Canadians surveyed saying they expect the NDP to win on Oct. 19, more than the 23 per cent who expect the Conservatives to come out on top, and 21 per cent who say the Liberals. Coletto noted this was the first time an Abacus poll has found the NDP ranked as the party most expected to win.