Nov. 1: A review of the perks provided to former governors general should be just the start of a push for more accountability at Rideau Hall, while a privacy investigation has been launched into StatsCan's data grab 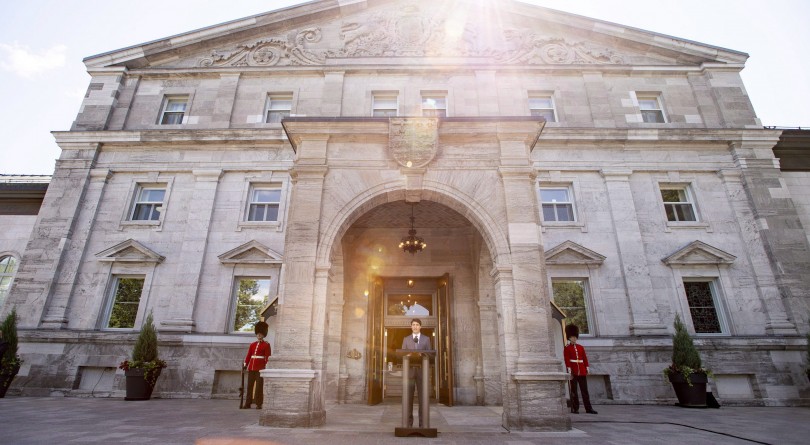 The federal government will review the perks it offers former governors general, after the revelation that Adrienne Clarkson, who left the post in 2005, has billed taxpayers at least $1.1 million for “office expenses” in the years since. (Canadian Press)

The review can’t come soon enough, writes David Moscrop. Canadians should demand more accountability and transparency from the office of the Governor General:

Not only is Rideau Hall far more opaque than it ought to be, it’s a baroque and still-far-too-antiquated institution to begin with. You would think that an institution that still uses horse-drawn carriages from time-to-time would be especially sensitive to public perception and the imperatives of transparency and accountability, but that seems not to be the case. Sure, there are historical matters of protocol, and we should have nice things—but if you’re going to use gilding and carriages, you’d better be prepared to account for every nickel and dime, line by line; we citizens for whom your office and its functions exist deserve to know how their money is spent by current and former vice-regals, if only so that we can make sure we’re not getting ripped off by our gilding and carriage guys. (Maclean’s)

With a storm brewing over Statistics Canada‘s plan to collect private banking information from 500,000 Canadians , the agency’s chief data wrangler took to twitter to defend the project. From Anil Arora‘s statement: “Traditional statistics gathering methods are no longer sufficient to accurately measure Canada’s economy and social changes. It is our duty to leverage the best methods and sources to provide facts to Canadians when they need it while providing the highest level of protection of privacy and confidentiality.” (Twitter)

Arora said StatsCan had worked closely with the federal privacy commissioner in development the plan. He’ll be hearing more from that office. Hours after Arora put out his statement, Privacy Commissioner Daniel Therrien opened a formal investigation into the massive data gathering effort. (Globe and Mail)

Tom Parkin argues the only two reasons Prime Minister Justin Trudeau could have had to hold off calling a byelection in Burnaby, B.C., where NDP Leader Jagmeet Singh hopes to run and win a seat, were “spite or fear”:

Donald Trump is the kind of man who makes petty personal insults for amusement, lies as a strategy and hurts people so he can profit. Among others, Trudeau—and each of us—has been on the receiving end of that politics.

And therefore it is an amazing display of an absolute absence of self-reflection that, having just ended this chapter, Trudeau himself so casually threw his own petty attack on NDP Leader Jagmeet Singh, a democratic competitor who has done Trudeau no personal harm, by refusing to call a by-election in Burnaby South, where Singh is the nominated NDP candidate.

In other Liberal-pettiness news, government MPs voted on Tuesday night to replace Conservative MP Leona Alleslev as chair of the Canadian NATO parliamentary association, just two weeks before the military veteran-turned-politician was to take part in an annual meeting of the global NATO Parliamentary Assembly in Halifax. Alleslev, of course, infuriated Liberals in September by crossing the floor to the Tories.

That would have been the news, except a group of Conservative staffers and at least one MP then brought out a bottle of clear liquid—which Tory MP Garnett Genuis later said “tasted like gasoline”—filled up red, plastic cups and proceeded to drink and sing John Denver tunes to protest the Liberal move. And suddenly the story became about the appropriateness of MPs drinking on the Hill with staffers. (Global News, Twitter)

The Canada Border Service Agency has set a target of boosting deportations of failed refugee claimants by 35 per cent to 10,000 removals per year. That would still be down significantly from the 15,000 to 19,000 annual deportations that occurred from 2010 to 2013. (CBC News)

Missing: One Liberal MP. Answers to Nicola Di Iorio. The Montreal-area MP hasn’t been spotted on Parliament Hill since the House returned on September 17, though he has been out in public working a second job as a labour and employment lawyer. MPs aren’t sure what to make of Di Iorio’s absence, but at least one Liberal MP noted about the optics of him keeping up his second job: “from an image standpoint, it certainly doesn’t look good.” (Canadian Press)

Okay, so yesterday we wrote Calgary’s Olympic bid looked dead. And the majority of city councillors did indeed vote Wednesday to put the whole thing to rest. But the vote needed a two-thirds supermajority to succeed. So now it’s up to Calgarians to vote in a plebiscite on the matter on Nov. 13. As Jason Markusoff writes, Calgarians will decide on a bid that saw organizers perform “arithmetic flips and triple lutzes” to try to make the numbers work:

The bid corporation tried various approaches to keep its project viable for a bit longer. It argues that the city taxpayers’ investment of $390 million yields the city more than $4.4 billion—or every dollar being spent on a Winter Games, as though all the money that compensates Belgian snowboard judges and overtime pay for visiting Saskatchewan police lands directly back in Calgary coffers. Board chairman Scott Hutcheson tried the how-dare-you approach to council, passionately warning them they’d “undermine the process” if it ended that day. And then, to counter common arguments that Calgary 2026 is a shameless play on nostalgia for 1988, the bid group ended its pitch to council with a three-minute video of ’88 hokum and more recent Olympic glory—a preview of what will be a heavy emotional appeal to the voting public. Adding to that bit of arm-twisting, former Olympians and other bid supporters and employees filled council chambers wearing red shirts saying “Calgary: it’s your decision.” (Maclean’s)