After the death of Tory MP Gord Brown, parliamentarians console their seatmates

MPs remembered a colleague 'who died way too young.' 'I don't think there's any greater tribute than to be universally well-liked in this place.' 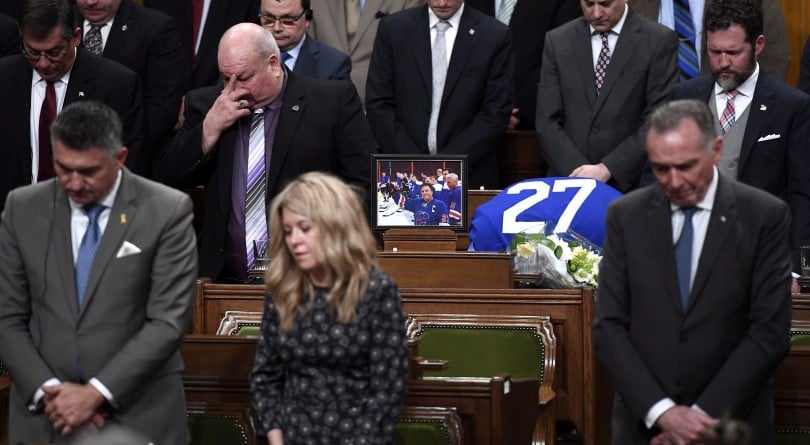 Flowers, a photograph and hockey jersey lie on the House of Commons desk of Conservative MP Gord Brown on Wednesday, May 2, 2018. Brown, who was the MP for Leeds-Grenville-Thousand Islands and Rideau Lakes, died suddenly at the age of 57. (THE CANADIAN PRESS/Justin Tang)

In the House of Commons, most parliamentarians sit in couplets, twinned at double-desks, two MPs to a pod. But Conservative member Larry Miller just lost his pair.

“Someone must’ve had a sense of humour to put the two of us side by side,” says Miller, speaking about Conservative MP Gord Brown and himself, who supported rival hockey teams. “I was the last guy to sit right beside him and be his seatmate, and that’s bittersweet.”

On Wednesday morning, Brown, the representative of Leeds-Grenville-Thousand Islands and Rideau Lakes, died at age 57 in his office after suffering a heart attack. Brown had a wife, Claudine Courtois, two young sons, and 337 colleagues in the House of Commons, many of whom replaced questions with tributes to Brown on Wednesday afternoon.

Across parties, pairs of deskmates consoled each other. Conservative Michelle Rempel’s neighbour rubbed her back in support for a moment; Status of Women Minister Maryam Monsef passed tissues to her duo, Conservative Party deputy leader Lisa Raitt and leader Andrew Scheer stood side-by-side shaking hands with a procession of parliamentarians, and Miller, who didn’t make a speech, leaned on Brown’s chair with his left arm and dried his cheeks and nose with his right.

“He’s just a consummate colleague, died way too young,” says Miller, who was elected the same day as Brown in June 2004. Brown’s chair was empty but for a miniature hockey stick as part of a shrine with a picture frame and bouquet.

“The human condition is fragile,” said Bloc Québécois member Xavier Barsalou-Duval in a speech. “We are all mortal. As a member I am deeply touched. Also as a human being. I want to salute the courage of the man who dedicated his life to the wellbeing of citizens.”

On Prince Edward Island, in a red truck, Liberal MP Wayne Easter once drove Brown to see the sites, as Easter recalled in a speech, having befriended Brown as co-chairs of the Canada-United States Inter-Parliamentary Group. The tributes brought Green Leader Elizabeth May running down the aisle, her cardigan flapping as it caught air, to hug Andrew Scheer and hold him by the shoulders, height difference no matter.

May made a speech herself and discarded the possibility that colleagues may be embellishing Brown’s memory. She assured Canadians, “We’re not exaggerating virtues; we’re not eliminating faults. In politics, I don’t think there’s any greater tribute to a human being than to be universally well-liked in this place.”

Brown managed to be well-liked even in his role as party whip. “I remember the day that his staff bought him a bullwhip to commemorate his appointment,” said Scheer in his speech. “He got such a kick out of that. I remember for the first few days, I could hear the crack of that bullwhip, and I was always worried he was going to hurt himself.”

Scheer recognized Brown’s work for victims of thalidomide, and others noted Brown’s successful bill to rename Thousand Islands National Park. “We know not the time or the place, but we trust in God’s limitless mercy and everlasting love. We trust that his memory will be a blessing on all of us here,” said Scheer.

When the House adjourned, members hugged House Speaker Geoff Regan, getting tangled in his robes. When Miller left the chamber, a page plucked the glass of water off his desk and let the shrine beside it be.