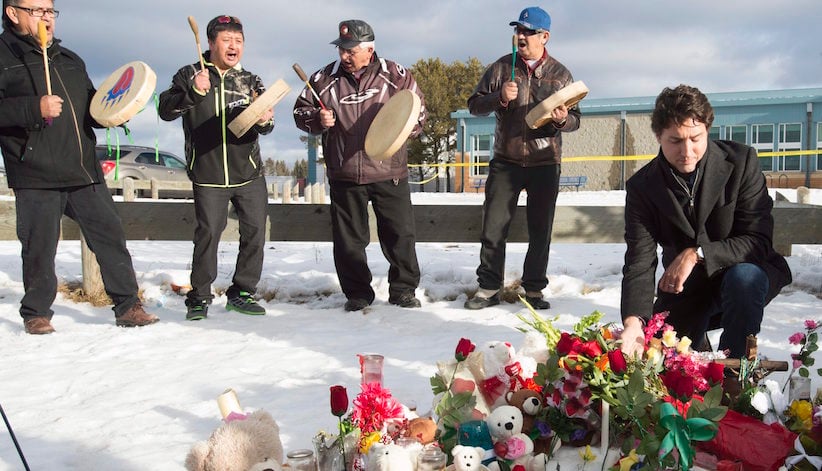 Prime Minister Justin Trudeau pauses for a moment as he lays a wreath outside the La Loche Community school in La Loche, Sask., Friday, Jan. 259, 2016. A 17-year-old boy allegedly shot two people at the school last Friday after shooting two brothers to death earlier at a home nearby. THE CANADIAN PRESS/Jonathan Hayward

Prime Minister Justin Trudeau flew Friday to La Loche, Sask., with an entourage of cabinet ministers, to offer sympathies and lay flowers, to listen and offer broad promises but zero specifics on how the federal government can assist the remote Dene village and others like it in Canada’s north.

That last point, about lack of specifics, is not meant as a complaint. It’s a day before the first of the gunman’s victims will be laid to rest in La Loche—a better time to open up long-in-the-making conversations, rather than to punctuate them. The complex problems La Loche faces have been developing for decades, and while they shouldn’t take further decades to address, they won’t be solved by politicians jabbing fingers in the air in the aftermath of a shooting that killed four and injured seven at the town’s high school.

“I committed that the federal government will be there: not just now through the difficult time, but in the weeks, months and indeed years to come as we look to grieve, heal and move beyond and thrive in the years to come,” Trudeau told reporters after his meetings with La Loche officials, along with his ministers of public safety, health and justice. Tragedies like this, the Prime Minister said, “should serve to highlight challenges that don’t just exist here but across the country so while we grieve and support this community we also think of communities like it across the country.”

The challenges are legion: education, economic opportunity, suicide, mental health, and, though it’s been on few lips in La Loche this week, the HIV epidemic among Saskatchewan aboriginals that’s at on par with rates in Africa. The solutions aren’t simple, and almost none of them are glaringly obvious. But after a soft-voiced initial visit to La Loche, here are five more things Justin Trudeau and government can do to make a difference in this town and others like it:

The day after Saskatchewan Premier Brad Wall visited in wake of the shooting—he was there again with Trudeau on Friday—I sat across a desk at the La Loche Friendship Centre and asked executive director Leonard Montgrand what he would say to Wall. “A lot of people say in our community the only time we see politicians are only two times,” Montgrand said. “Once for election, and once for a crisis.” Not showing up after one of the worst school shootings in Canada’s history could have been a political liability to Trudeau in the rest of Canada. Not showing up again for a follow-up visit will reaffirm the cynicism Montgrand expressed. This especially holds if Trudeau wants to make good on the following I’m different comment he made during his visit: “I can’t speak for past governments, but I do know that governments of all stripes have not done enough to support and invest in northern and remote communities, and this is a reminder that in Canada, everyone should have a real and fair chance to succeed, regardless of where they were born, regardless of where they live.”

Indigenous Affairs Minister Carolyn Bennett told APTN she will visit the 2,600-person village in a couple weeks, with a “commitment to demonstrate what people were worried about on TV last night, that the minute the cameras leave, that no one cares.” That’s a useful start. But when the leaves and grass returns in summer, and winter’s snow returns again, and most cameras don’t return, will the ministers still check in?

As Trudeau said this tragedy, “while we grieve and support this community, we also think of communities like it across the country.” Yup. With a prime ministerial airplane ever at the ready, he should do more than think about these communities. Trudeau could visit La Ronge, a north-central Saskatchewan town of similar size to La Loche; or Sandy Bay, at the end of the highway near the Manitoba border (La Loche sits near Alberta). Northwest Ontario chiefs have recently highlighted the disturbing frequency of suicides among children younger than 15, while the experience of life in the territories’ smaller communities cannot be clearly understood on visits to Iqaluit or Yellowknife. The solutions for a Dene-speaking community in one province may be a misleading sample to figure out what ails a Cree town in another; on-reserve and off-reserve issues can be worlds, or at least responsible jurisdictions, apart. Best not to wait for another unspeakably tragic inflection point to plan such a visit, especially if what Trudeau wants is a clear picture of what’s ailing and what can help.

There have been useful, important questions on government’s mental health services in the north, as well as about school anti-bullying efforts and security. The provincial and federal governments have been in what they’ll call a “listening” stage. While listening without action provides fleeting comfort, playing the role of a decisive politician too soon does little good, either. Kevin Janvier, on only his 22nd day as La Loche acting mayor when the school shooting occurred, tried to offer such a strong response. He wants government to tear down the high school, to help erase the traumatic reminder—an idea bolstered by his predecessor Georgina Jolibois, now the area’s NDP MP. The school was last upgraded in 2006—a much-beloved improvement to the 1970s building, completed with vaulted ceilings in a new foyer. While this would follow Connecticut’s move after the Sandy Hook Elementary School shooting, it’s a multimillion-dollar promise to a community where dollars could be spent in so many other ways to improve social outcomes. Some of the solutions may be found among the 94 recommendations of the Truth and Reconciliation Commission. 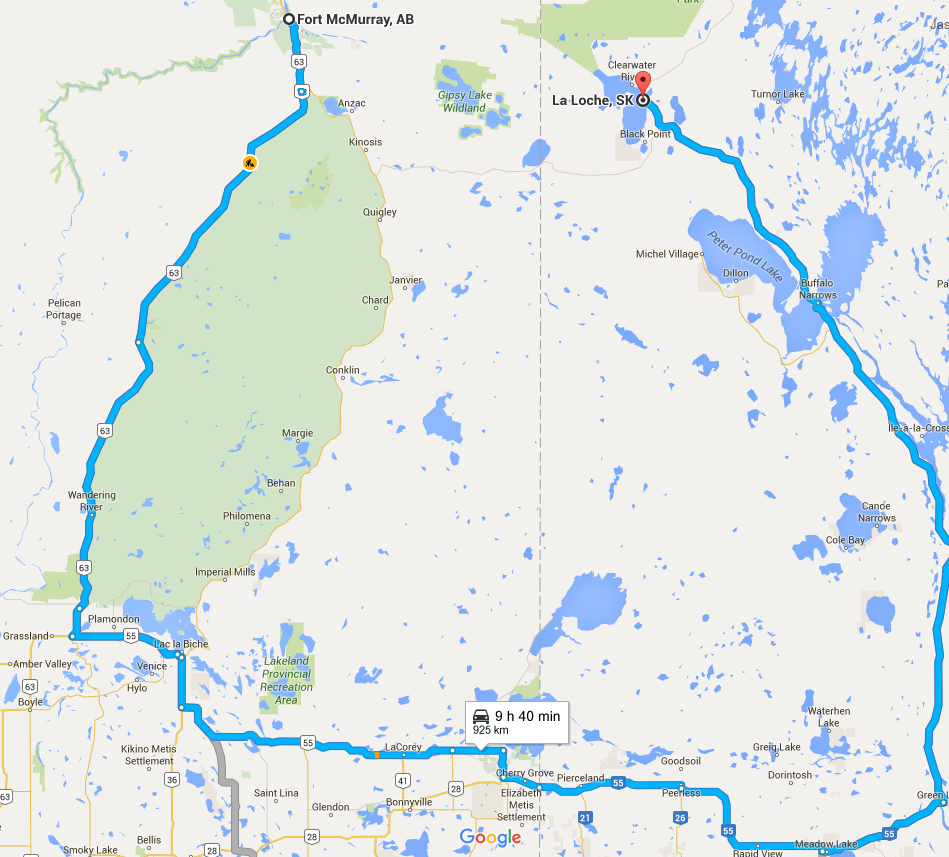 See this map, showing La Loche and Fort McMurray fairly close to each other but a 10-hour drive away? And do you see that faint grey line that appears to connect them much more efficiently? That is Highway 956, which only exists as a rugged winter road through northern muskeg. By March, the two-hour commute between the Dene town and the oilsands city melts away.

In 2005, the premiers of Saskatchewan and Alberta pledged $45-million to complete the road. Most of the benefit would be on the Saskatchewan side—a link to one of the richest employment basins Canada has ever seen, and one that many La Loche-area residents had already been drawn to. Most of the costs were on the Alberta side, and as for the benefits, then-premier Ralph Klein made some cracks at a news conference about the walleye fishing he could do up there. The road construction was never funded in Klein’s waning days, or when other premiers took over after his 2006 resignation.

Alberta has instead spent money on highway projects that benefit its own population, such as making a bigger road to Fort McMurray less perilous. This is an obvious place for Ottawa to step in with its infrastructure dollars. Highway 956 may wait a long time before reaching the top of Alberta’s priority list, but the federal government should help finance this interprovincial project. Economic opportunity is sorely lacking in and around La Loche; and while times are grim in Fort Mac as well, things remain much better on that side of the Saskatchewan-Alberta line. This is a hasty decision no side would regret.

5) The private sector needs to play

La Loche has for too long been a no-go zone for private investment. Aside from a Laotian family that built a new supermarket recently, there’s not much else in the way of new employment opportunities in a town where those not working vastly outnumber those who do. No hotel, no restaurants (aside from short-order counters at grocery stores), and what’s most challenging is that there’s no bank there—no institution to offer startup loans to town entrepreneurs, or even savings accounts for their paycheques or government assistance. If this was Alberta, the provincially owned ATB Financial would likely be operating, but Saskatchewan is like every other North American jurisdiction and doesn’t have such an institution.

A town with only government intervention will not thrive. Successfully encouraging the private sector to venture into a many-troubled town is no easy task for government, but few tasks are up there. 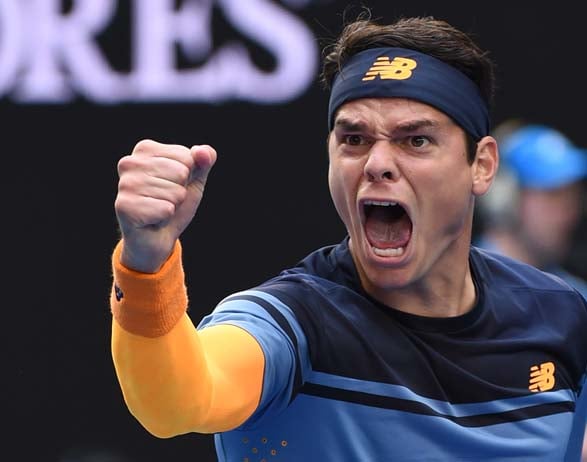 Milos Raonic celebrates his victory over Switzerland's Stanislas Wawrinka  on day eight of the 2016 Australian Open.