After Wilson-Raybould resignation, Trudeau says 'She never came to me'

Politics Insider for February 13: Wilson-Raybould quits cabinet as Trudeau expresses 'surprise and disappointment', a look at what she didn't say in her resignation letter and even socialists can like nice things 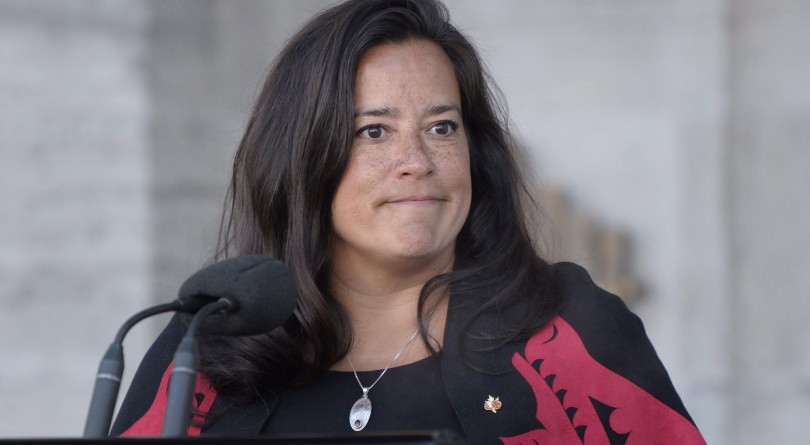 Jodie Wilson-Raybould addresses the media following a swearing in ceremony at Rideau Hall in Ottawa on Monday, Jan. 14, 2019. THE CANADIAN PRESS/Adrian Wyld

A day after Prime Minister Justin Trudeau suggested Jody Wilson-Raybould‘s continued presence in cabinet showed there was no political interference in the SNC-Lavalin case, Wilson-Raybould quit cabinet. A letter posted on her website announced her resignation from cabinet, though she plans to still serve as MP for the Vancouver-Granville riding. Wilson-Raybould’s letter didn’t give a reason for her resignation, but she revealed she’s hired former Supreme Court judge Thomas Cromwell to advise her on what she can say about “matters that have been in the media over the last week.” (Canadian Press)

Anne Kingston reads the vast spaces between the lines in Wilson-Raybould’s resignation letter for the subtle, and not-so-subtle, signals she was sending:

5. Omission destined to spark speculation: No reason is given for her resignation, not even the cliched: “To spend more time with my family.”

6. Covert slam of Real Change™: “When I sought federal elected office, it was with the goal of implementing a positive and progressive vision of change on behalf of all Canadians and a different way of doing politics,” Wilson-Raybould writes. Her commitment to “fundamental change” hasn’t changed: “This work must and will carry on.” (Left unsaid: But not in the Trudeau cabinet.) (Maclean’s)

On Tuesday evening Trudeau spoke to reporters in Winnipeg, repeating over and over that Wilson-Raybould never came to him about any concerns she had, and that he was “surprised and disappointed” by her decision to resign from cabinet. Here are the highlights: (Maclean’s)

If you thought the Trudeau government was about family benefits and boil-water advisories, the SNC-Lavalin affair offers a glimpse of the real scene—maybe the real Canada, writes Paul Wells:

Eighty meetings, the SNC-Lavalin lobbyists had with tout ce qui bouge à Ottawa. The lobbyists included Bill Pristanski, who used to run the weekly senior-staff meetings when Brian Mulroney was prime minister. And Bruce Hartley, who used to get Jean Chrétien on the phone if you needed him, and still can. The company’s lawyers include Frank Iacobucci, 81 years on this earth and not a minute wasted, puisne justice (ret’d) of the Supreme Court of Canada, Interim President (ret’d) of the University of Toronto, the very Laurentian rock made flesh.

The chairman of SNC’s board used to be Lawrence Stevenson, founding CEO of Chapters, a paratrooper in his youth, a retailer in later life, strong and true. But by late 2017 Stevenson was not well-connected enough for the task at hand, and SNC made haste to replace him as board chair with—with—avert your gaze, ye mortals—with Kevin Lynch, Clerk (ret’d) of the Privy Council, the man who—before he became Clerk, operating at barely lower levels of exaltation—built Chrétien’s industrial policy, designed the fabled Canada Foundation for Innovation—and then finally bent the very bureaucracy itself to Stephen Harper’s whim. The man wields jargon the way a ninja tosses throwing stars.

A company replaces Lawrence Stevenson with Kevin Lynch when it is, at least temporarily, out of the business of building roads and dams because it finds itself, full-time, in the business of crafting Deferred Prosecution Agreements. (Maclean’s)

Here’s some other opinion and analysis on Wilson-Raybould’s resignation:

One final bit of SNC-Lavalin news—prosecutors in Quebec are working with the RCMP on what could lead to bribery charges against the company over a contract to refurbish Montreal’s Jacques Cartier Bridge in the early 2000s. (Canadian Press)

Last week a fake article circulated on B.C. websites via an online ad network that claimed NDP Leader Jagmeet Singh owns a luxury mansion, which the NDP called defamatory. The episode raised questions about exactly who made the ad, or what impact it might have on voters, but as David Moscrop writes, it also raises another question:

Why should anyone care if Singh does own such a home? (Again, he doesn’t.) Or, for that matter, why is it inconsistent for him to be a social democrat (or even a socialist) and wear custom suits and a Rolex while driving a BMW or riding a designer bicycle?

Last fall, rookie congresswoman Alexandria Ocasio-Cortez was photographed wearing an expensive suit. The right, suddenly discovering class politics, attacked her as a hypocrite. “How can a ‘socialist’ own something nice?” they howled. “Moreover,” they asked, “How dare she wear it for all to see?” The whole kerfuffle was as disingenuous as it was motivated by schadenfreude and other considerations born of complicated feelings. The suit Ocasio-Cortez wore was provided to her—on loan—for a photo shoot. But, again, the affair raised a question that we in North America have yet to ask answer: Why should anyone care if a socialist or social democrat owns something nice? (Maclean’s)