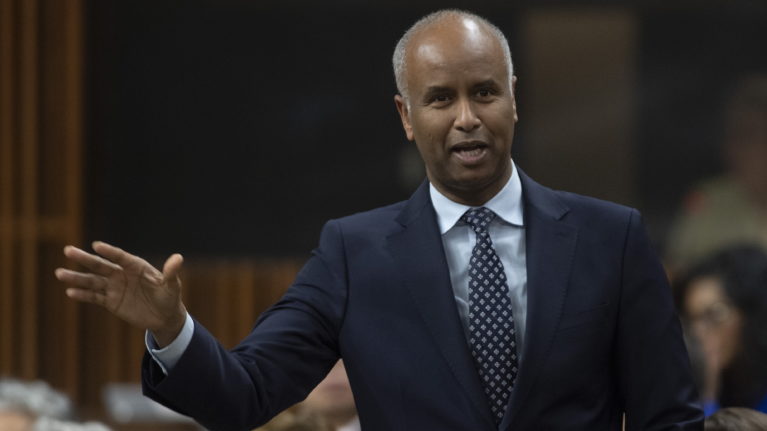 Families, Children and Social Development Minister Ahmed Hussen responds to a question during Question Period in the House of Commons in Ottawa, Thursday, Feb. 27, 2020. (Adrian Wyld/CP)

“Anti-black racism does not stop at the border.” Those were the reflective words of Ahmed Hussen, a cabinet minister and Somali refugee who oversaw the immigration portfolio for two years before the last election. “As a Black man & a father of 3 young boys,” he tweeted on May 30, “I can tell you it is a lived reality for Black Canadians.”

Hussen called on Canadians to “step up” and call out racism, “look inward” at systemic discrimination in Canada, and keep an eye “around you and within you” for unconscious bias. “Only then,” he said, “can our children walk into a grocery store without being followed, can jog around the block without fear, can enjoy watching birds or going for a bike ride, can walk past people without them holding their purse closely as if it was going to be stolen.”

Yesterday, Hussen told CTV News that he still gets followed around in stores and “instinctively,” his “back gets up” when police cruisers are nearby while he’s driving.

The subtext, of course, was the widespread anger in many American cities in the wake of George Floyd’s death under three American police officers. Prime Minister Justin Trudeau, who admitted on the last campaign trail that his decision to wear blackface on multiple occasions was racist, addressed the weekend protests from his home at Rideau Cottage. He repeated many of Hussen’s words and added a message for Black youth. “To young black Canadians, I hear you when you say you are anxious and angry, when you say that this brings back painful experiences of racism that you’ve faced. I want you to know that I’m listening and that your government will always stand with you.”

Journalists covering the protests south of the border reported dozens of cases of mistreatment by police. One Canadian reporter said she was hit by a rubber bullet. Another said his tires were slashed. The Canadian Association of Journalists expressed outrage at the conduct of cops. “It’s positively nightmarish,” said president Karyn Pugliese. “They are out of control.” (Full disclosure: your newsletter correspondent is the CAJ’s outgoing past-president.)

The PM also announced $2.2 billion for cities out of the federal gas tax fund. (Whenever you fill up your tank, 10 cents per litre is funnelled to the feds. Typically, they distribute that money twice a year to provinces. Now, the full payment will be sped up and bundled into a single payment.) The Federation of Canadian Municipalities, which has called for a $10-billion pandemic funding boost for distressed cities, says this money isn’t new—and is already in municipal budgets.

Debate the debates: The federally assembled commission on leaders debates published a report into its work last year. The commission’s “principal recommendation” is to make it permanent. There are 10 others, including that the commissioner should be selected after consultations with political parties. Curiously, the graphics on viewership that compare last year’s effort to previous campaigns includes the Maclean’s/City debate in 2015—but disappears it on the 2019 chart. (The report did note the existence of this magazine’s debate, and reminded readers that Trudeau, who only committed to the commission’s English-language endeavour, didn’t participate.)

The first of the month: Retailers are staring down a third round of anxious mid-pandemic rent payments. Even as some businesses slowly start to re-open, morale is the pits. The Retail Council of Canada nudged Maclean’s on its most recent member survey results, which showed 48 per cent of retailers haven’t been able to pay their rent at all. One-third of respondents said landlords had “threatened to either change their locks or evict them as a tenant.” The B.C. NDP government decided to ban evictions for tenants whose landlords won’t apply for federal-provincial rent relief. Meanwhile, the Canadian Chamber of Commerce launched applications for its small business relief fund, a co-pro with Salesforce that’ll send $10,000 grants to 62 companies.

A new Abacus poll revealed that even where federal Liberals are unpopular, their approval ratings remain high. Even in Alberta, more people give Ottawa’s political masters a pass (46 per cent) than a fail (39 per cent). On climate change, 60 per cent of Tory voters say the Liberals are on the right track. On the economy, the same number of Albertans give Trudeau a thumb’s up. And while two-thirds of Conservatives say the feds are failing on handling deficits and debts, that still leaves another third that supports the status quo.

A preliminary report into the Snowbirds crash last month posted deep on the Royal Canadian Air Force’s website wasn’t conclusive about what brought down the Tutor jet, but this image does show a bird in flight near the aircraft’s engine intake. The investigation will focus on that possible bird strike, as well as the “performance of the escape system” that may have failed to save the life of Capt. Jenn Casey.

The vaguest possible tweet: The Canada Border Services Agency might have set a record for the tweet with the least possible information about what appears to be a concerning situation. Maclean’s couldn’t verify much at all about the video in question.

Finally, here’s Peter MacKay, a man who wants to be prime minister, sporting a milk moustache.